Before we start, I want to remind everyone that today is the last day of Pyramyd Air’s special shipping promo! Instead of buying $100 to get free shipping, you have to buy only $50 in merchandise to get free ground shipping. This special promo is good through today (Jan. 7) and is available only for addresses in the lower 48 states. You cannot combine coupons with the free shipping offer.

History
If you’re new to airgunning, you need to know what transpired to bring a rifle like the .177 caliber Tech Force TF79 Competition Rifle to the market. It began in the 1950s with the inception of the Crosman 160. The 160 was a .22 caliber single-shot CO2 rifle that used two cartridges to shoot 25-35 pellets at around 610 f.p.s. Back in the 1950s, the 160 was a minute-of-Oreo-cookie at 15 yards. As time passed and European pellets began arriving at our shores, the accuracy improved. The Crosman barrel was always well-rifled, but it took us several decades to realize how good it really was.

Crosman also improved the rifle, ultimately resulting in the high-water mark, which was a military single-shot target rifle with a Williams S331 peep sight and a genuine leather sling. I was active as an airgunner in Maryland in the 1990s when several hundred of these Crosman Air Force rifles were discovered in a warehouse and sold as new old stock. For a while, I owned a brand new 1980 Crosman MIL-SPEC target air rifle.

However, in the 1990s, the Crosman Premier pellet was available. So, the rifle that the Air Force thought might shoot a half-inch five-shot group at 25 feet was suddenly capable of shooting just as good at 25 YARDS. The pellet made all the difference in the world; and, for many years, the airgun world was hot for 160s.

Enter Tim McMurray and Henry Harn. Tim we all know as Mac-1, and he’d been working on 160s for decades by this time. Harn was a businessman with connections in China, so he asked Tim to put together the finest version of a 160 he could, and then Harn would have the Chinese duplicate it. Yeah, I know what you’re thinking, only Harn and McMurray rode the Chinese roughshod until they got what they were after — more or less. The QB-22 was a knockoff of the Crosman 160 that gave nothing away in quality or accuracy. Tim did have early problems with barrel quality, but he sorted it out.

But, the QB-22 retailed for $200 in the 1990s. Like today, everyone wanted a free lunch, so the guns didn’t move as fast as expected. If you build it, they won’t necessarily come, but a lot of them will stand around with their hands thrust deep into their empty pockets and kicking dirt clods while saying things like, “What they should have done….”

The QB 22 languished. About a year later, something called a QB 78 hit our shores and it retailed for about $78. That got people talking. A real Crosman 160 for $78! Only, it wasn’t a real 160, of course. It was a gamble. Some of them shot great, while others were just mediocre. For the first time, the Chinese were embarrassed by their own lack of quality. They had expected huge sales, but the lackluster performance of the gun left sales in the dumper. Apparently, you can’t just build a mock landing strip and control tower to attract the cargo planes from the U.S. (I’m referring to the cargo cults.)

So, they did something remarkable. They built a new and improved rifle — the QB 79. The gun they should have built all along, only they didn’t. Now, they were at it full bore. Yes, the QB 79 was the gun you really wanted, but they had quality problems with that model, as well. Some were great shooters, while others were only mediocre.

Okay, now I have to hit the fast-forward button, because both these designs have matured and morphed like gangbusters in the past 10 years. For example, there’s a target version of the QB/TF 79 that’s a super deal in an accurate single-shot. Compasseco had a TF78 with a dark stock and a gold trigger that was to die for. Whole cottage industries have sprung up around these models.  Stephen (sorry for the typo!) Archer in upstate New York makes his living selling both repair parts and modified parts for the rifle and by selling high-graded rifles, which are based on accuracy.

That’s enough history. You now know that what we’re about to look at is a close copy and descendant of the famous Crosman 160. You may not yet know what that entails, but therein lies my report.

Sights
The rifle I’ll be testing for you is the full-blown TF79 target rifle. It comes with both a precision adjustable aperture rear sight for 10-meter work and a sporting sight that lets you use the rifle as a plinker. You also get two inserts for the target globe front sight. The ring insert comes installed, and there’s also a post insert for the sporting rear sight. Anyone who wants to put the little holes in the center of the target will use the ring insert and aperture rear sight. 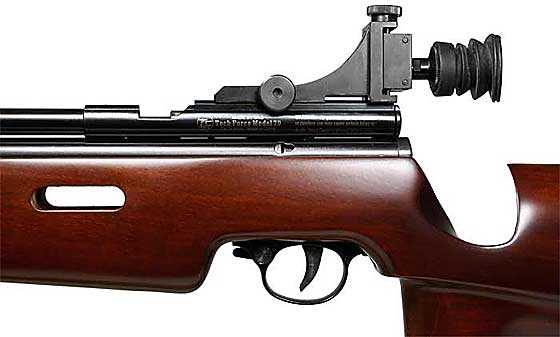 With the rifle comes a large metal precision aperture target rear sight. While not the equal of a $500 European target sight, it works. There’s also an adjustable sporting rear sight, if you chose to use it.

The steel receiver is topped with an aluminum dovetail base for the rear peep sight or sport sight. This same base will also accept an 11mm scope mount, and I know that a lot of you are going to be putting scopes on your guns. The lack of recoil means you have nothing to worry about as far as anchoring the scope rings.

Charging the gun
This rifle operates either on two CO2 cartridges or via a bulk-fill adapter. However, the bulk-fill CO2 hose and paintball adapter was left out of the box I received. I think I’ll simply use CO2 cartridges to test the gun, anyway. With the hose, it’s possible to bulk-fill the gun from a standard paintball tank.

Replace the reservoir cap with this adapter cap, and the CO2 hose screws into the end of the adapter. The hose was missing from my box, so I’ll just use CO2 cartridges. 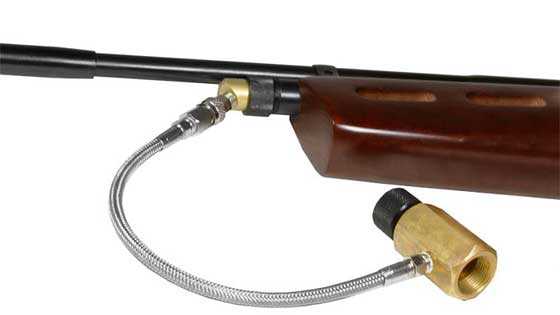 Just screw a paintball tank into the adapter, and you’re ready to fill the rifle with bulk CO2.

You also get two Allen wrenches for making adjustments, and there’s a degasser that Crosman never thought of. The degasser allows competitors to dump their partial fills and start a match with a full tank of CO2, something that cannot be over-estimated. Degassing also acts to chill the reservoir, to enable a denser fill when bulk-filling.

In all, you get about the same amount of support gear as comes with a $2,000 10-meter air pistol. I’m very impressed at this well-thought-out package for just $180. And, let’s get that out of the way right now. Carp all you want, there simply are no other 10-meter target rifles that sell for this price. Even used, you’ll be hard-pressed to find anything. 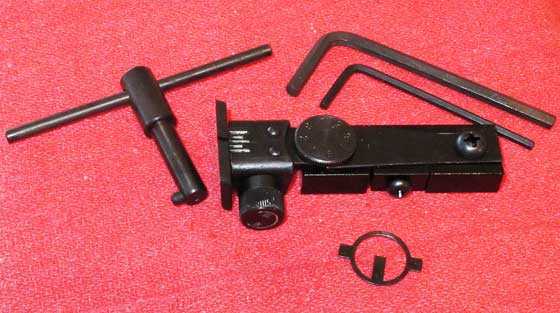 The rest of the accessories are the sporting rear sight, the front sight post insert and the two Allen wrenches for adjustments. The degasser lever fits into the left side of the receiver when you’re ready to exhaust some gas.

The stock
This is a heavy rifle, if not a large one. The overall length is a carbine-like 40 inches, but the stock is massive, which you want in a target rifle. The rifle weighs only 6.6 lbs., but the overall shortness makes you think that it’s heavier. The stock is not as ergonomic as the aluminum one found on a $3,000 FWB, but it’s well-shaped for the intended purpose. Think of it as a flashback to the 1960s, when stocks were solid pieces of wood on rifles like the Walther LGV and the FWB 300. The finish is dark reddish-brown, even and smooth. No gouges or fills insult your vision.

The length of pull is 13 inches, even — which feels short to me. Because this is a target rifle, a shorter LOP is proper. But, I think many shooters will find the pull adequate for their sporting needs, as well.

The trigger
The trigger deserves its own separate report, which it will receive. Back in the 1960s, Crosman took a crossbow trigger design from the 16th century and improved it for use in the 160. It was incredibly adjustable and could be set so crisp and fine that it rivaled a Rekord — not the target Rekord on the HW 55 — just the standard sport model. When Tim McMurray built his super-160 to show to China, of course it had that trigger.

As the gun comes to you, both Brian in Idaho and I noted that the trigger has lots of creep in stage two; but if this one is anything like the others I have adjusted over the years, it can be made light and glass-crisp, with an absolute dead-stop overtravel. For that reason, it gets its own separate report. Brian tells me he adjusted his down from 4 lbs. pull to 1 lb., 2 oz.

Cocks on closing
One big turnoff all shooters experience when trying a 160 for the first time is the cocking action. The bolt opens quite easily, but the hammer spring is caught and compressed (extended?) on closing the bolt. So, a 160 or TF 79 feels just like a Swedish Mauser when you cock it. American shooters have always been partial to bolt-action cocking taking place on opening, though I personally have converted my views over the years. With more experience, I see why cocking on closing is the better way. It’s faster and less bothersome in most bolt guns, save Weatherbys. Don’t be put off when you feel the resistance of the bolt at closing. You’ll get used to it.

Brian found the bolt knob too short for comfort, and I’m inclined to agree. The knob rests right at the edge of the stock, where it’s hard to grasp. An extra half-inch of bolt stem would make all the difference. Archer makes an extended bolt for the QB 78, but apparently not for the 79. One is needed!

Bottom line
While many of you are newer readers and not familiar with my past writing exploits, I’ve been writing about airguns pretty regularly since 1994. I’ve tested both the TF78 and TF79 numerous times. So, this will be a refresher for me, though I note many changes on this new rifle. This is going to be a big, long report because we have a classic and significant model under scrutiny.