Today’s topic was suggested by Dennis Quackenbush. We were discussing the influence made by a few key firearms, and he wondered if I’d ever written about airguns in the same vein.

The title says it all, and I bet a lot of you can start a list right away. But which ones to pick? It’s easy to speculate and guess, but is there a better way to choose the air rifles that really did make an impact? And what is meant by “impact?”

I find that an easy way to approach a monumental subject like this is to step away from airguns and choose something that many more people can relate to. Like automobiles, for instance. Which automobiles had an impact on the entire motoring universe?

Well, you can’t go very far without recognizing the Ford Model T. In production from 1908 through 1927, the model T put America on wheels. It caused roads to be paved, businesses to spring up in unlikely places and the entire demographic fabric of the United States to change forever.

When the flivver (as it was also called) first came out, politics in the U.S. were most important at the county level, then the state and only grudgingly at the national level. When it finally passed from the market, national politics were forever changed and local elections were relegated to the status of “also ran.” The Tin Lizzy got the farmer off his farm and into town as frequently as every weekend.

And, if the 15 million Model Ts were game-changers, what about the more than 21 million Volkswagen Beetles that swarmed over the planet from 1947 until the last one was built (in Mexico) in the early 21st century? Certainly, they had a major impact on personal transportation? [I know the Beetle is still being produced, but I’m talking about the original air-cooled version.]

See how easy this is when the topic isn’t as important as airguns? Now, name an air rifle that changed the game.

BSA
How about the very first modern air rifle that was conceived in 1905? Built by the Birmingham Small Arms company, best-known for their military rifles, the first underlever air rifle that came to market was called the Lincoln; but BSA liked what they were contracted to build and they put their own name on the rifle, as well. That one rifle started the entire line of smallbore airguns we enjoy today.

There were pellet guns before the BSA, of course, but they were primarily smoothbores and made to shoot darts. Their construction wasn’t robust like the BSA’s was, and they were entirely unsuited to the type of shooting we do today.

One of our own blog readers — RidgeRunner — picked up a 1906 BSA at the Roanoke airgun show last year. Maybe he’ll favor us with his impressions of this hugely important airgun?

This BSA underlever was the first modern air rifle.

FWB 124
It came along in the early 1970s and metamorphosed in front of our eyes. Originally it was nothing more than a well-made sporting breakbarrel, the 124 (or 121, as it was first known) had a longer piston stroke than any gun that went before. No doubt, the German engineers were just interested in keeping the cocking effort to a minimum; because in their country, the muzzle energy of airguns is limited to 7.5 Joules by law. A longer stroke meant they could use a less powerful mainspring and still get the velocity they were after, but it also meant the gun was primed to be hot rodded.

By the end of the decade, the 124 had become the first air rifle to break the 800 f.p.s. “barrier.” Several other companies — notably BSF and Diana — followed suit; and by 1979, the airgun velocity wars were in full swing.

Beeman R1
I’ll never forget seeing the Beeman R1 in the Beeman catalog. I had just purchased an FWB 124 and thought I was king of the hill, only to discover that the new R1 had 140 more f.p.s. I was livid! And within a year, Beeman was offering a special tune that jacked up the velocity over 1,000 f.p.s. — the first spring gun to do so. In another year, the standard R1 was getting 1,000 f.p.s. out of the box, and the special tune got them above 1,100 f.p.s.

The R1 didn’t stay on top for very long. Diana soon came out with their model 48 sidelever, which produced an honest 1,100 f.p.s. out of the box…and did so with less cocking effort than the big R1. But for as long as it reigned supreme, the Beeman R1 was like a booster rocket for the advancement of the spring-piston air rifle.

Beeman’s R1 accelerated the velocity wars beyond the sound barrier!

Are there others?
Of course, these 3 rifles aren’t the only ones to have a major impact on airgunning. I can think of several that belong in this group. What models do you think deserve this recognition? And why? 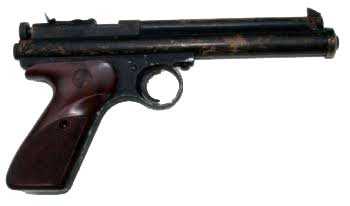 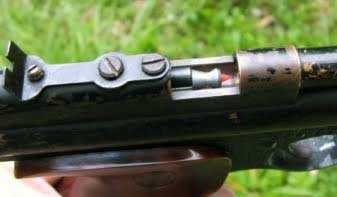 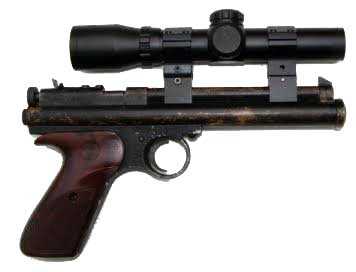 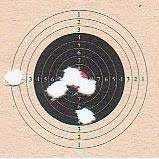 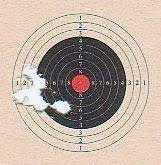 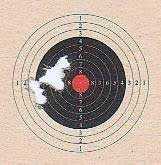 Gamo Hunters matched the RWS hollowpoints with a .60-in. group. 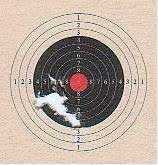 Crosman Premiers gave the best group at 10 meters at .53 in. 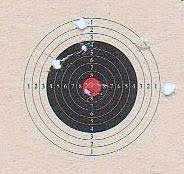 At 25 yds., the Beeman FTS pellets grouped in 1.55 in. The scope definitely helps at this distance.

Where do you get one?
There are plenty of Crosman bulk-fill guns still around, and they can be found at most airgun shows and on the usual auction sites. The 116 is probably the most common of the pistols since .22 was the preferred caliber in the 1950s and the shorter guns are more handy. Expect to pay about $90-$100 for a working sample in good condition. Many of these guns have not been shot for many years and are in need of resealing. The parts are readily available, and there are people who will do the job for a reasonable cost. If you have one of these guns, there’s no reason to let it lie around. With new seals and regular use of Pellgunoil, they’ll give many years of service. It would be a shame to leave one of these fine, old airguns sitting in a box and gathering dust.

I’ve had a lot of fun shooting the 116. Part of the charm is getting a 55-year-old gun working again. The 116 is also more accurate than I expected. For short range at low power, they’re a real joy. Lots of shots with no pumping!