Founded in 1945 in Racine, Wisconsin by Ed Wackerhagen and Bill Kraus, Sheridan Products, Inc. produced what many considered to be the finest airgun made in the USA. The company was born out ofWackerhagen's dissatisfaction with what he considered to be the poor quality of airgun offerings at the time. HIs dissatisfaction peaked after his disappointment with the pellet gun his son, Philip (who, by the way, was named after Civil War Union Army Gen. Philip Sheridan and is the company's namesake) was shooting.

Kraus and Wackerhagen produced a working prototype in 1944 and, in 1947, the first Sheridan Model A Super Grade air rifles were produced and remained in production until 1953. A number of air rifles have been produced under the Sheridan name ever since, including the Model B, from 1948-1951, the Model C and F - both of which remain in production to this day. Benjamin began producing them in 1976 until Crosman acquired Benjamin in 1992. Crosman has produced them since then. 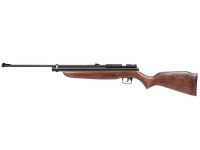