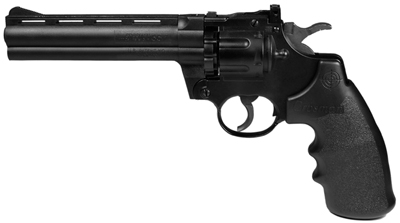 Realistic weight, nice looking; heavy build quality and durable. Fires great for a double action gun - no indexing problems , no jams so far. Shoots very acturate at 30 - 40 feet within a 2" to 3" grouping-mostly because of 'my' unsteady hand. Crosman made a really great product.

Nothing really --maybe offer some nice optional grips to dress up the pistol as a aftermarket product. The grips on the 357W are fine though, no complaints.

"Great" pistol for the price. Just a fun gun to plink with - or target shoot with. The double action hammer is made from steel and not plastic - well thought out in design. The rotary clips are inexpensive so buy a couple - and once you get into opening your pistol correctly - you should'nt have problems with the clips falling out - again no complaints. Pyramyd Air ships quickly with great tracking information and such a great Website. Thanks Again Pyramyd Air !!!

If you are looking for a nice-looking gun for plinking soda cans and other such targets from ~ 5 yards or so, and that you don't have to reload after every round, this is a pretty good gun for that task. Buy plenty of pellets as you will go through them fast... I get 80-100 shots per CO2 cartridge. On the other hand, if you are looking for a gun that is accurate enough for shooting bullseye targets at more than 5 yards away and you don't mind reloading after every shot, you'd probably be happier with Crosman's 1377 (I have one and really like it). The rear sights on the 357 revolver are adjustable for elevation and windage, but adjusting them does not seem to make the gun any more accurate at distances greater than 5 yards.