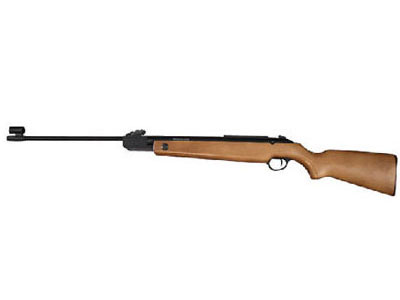 Great accuracy. All metal parts (not a plastic fantastic rifle) except for front sight and trigger guard. Neat rifle. It's sort of an odd one--like an ugly duckling, but it's a great shooter. Very powerful.

Matte finish on the metal is a little uneven, but not that bad overall.

This is an extremely good deal. If you are after results--a hard hitter that has the potential to send pellets through the same hole every time, then consider this rifle. It's not going to win any beauty contests, but it's one fantastic shooter. It has lots of recoil and torque, but it has one the finest barrels you will ever shoot.

It's a powerhouse (pretty close to RWS 54), really accurate with just iron sights, light for its' size, and you don't have to be afraid of dinging it up for the price. This gun with ironsights does well out to 65 yards on three inch praire chuck target silhouettes

It hasn't been an issue yet, but the jury is still out on the aluminum cylinder. Smooth out the cocking sequence and build in some more leverage.

The cocking sequence on this gun gives no quarters to old men, children or little old ladies. It is made for someone that can forgive the rough edges for the outstanding accuracy.