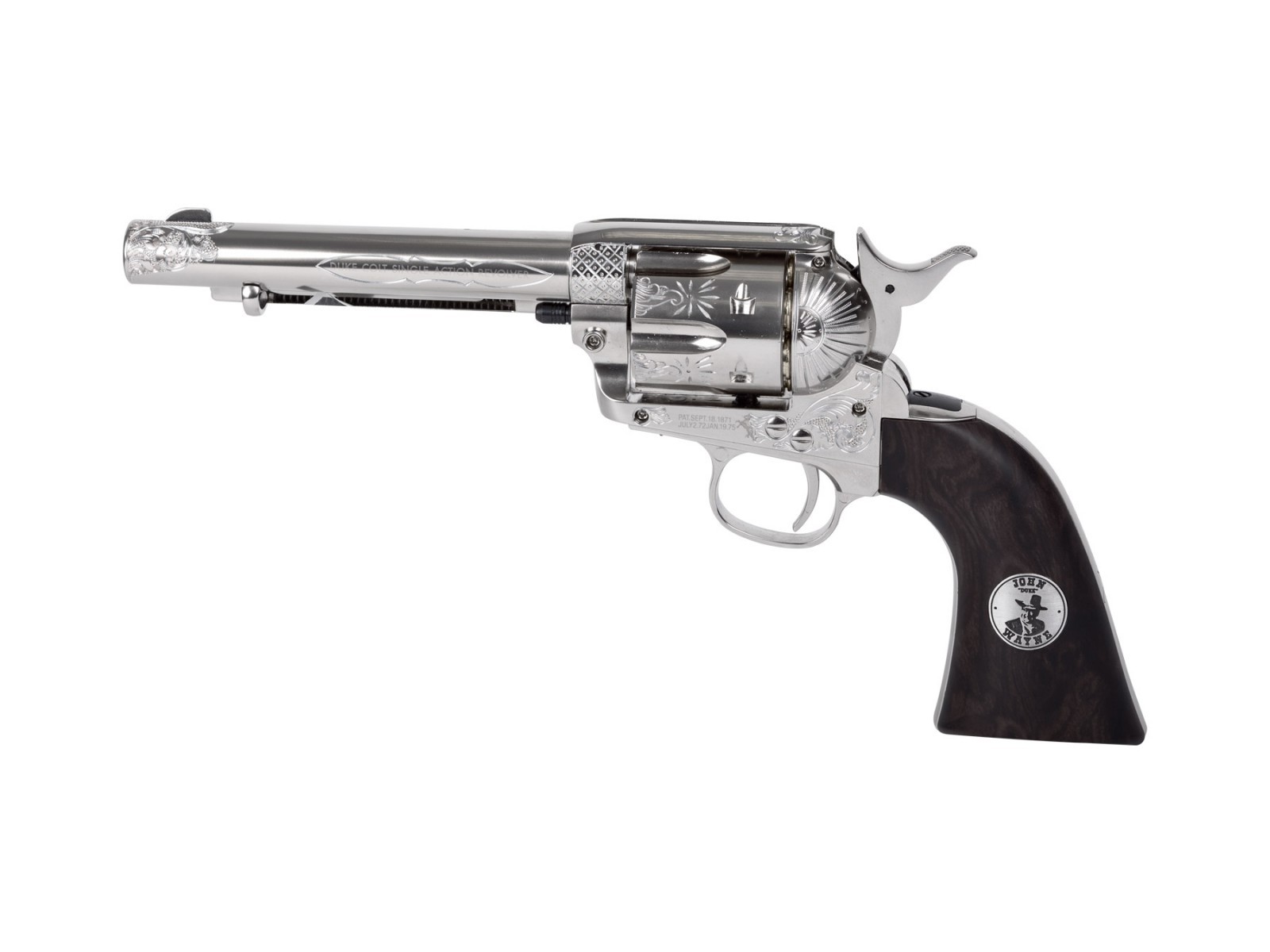 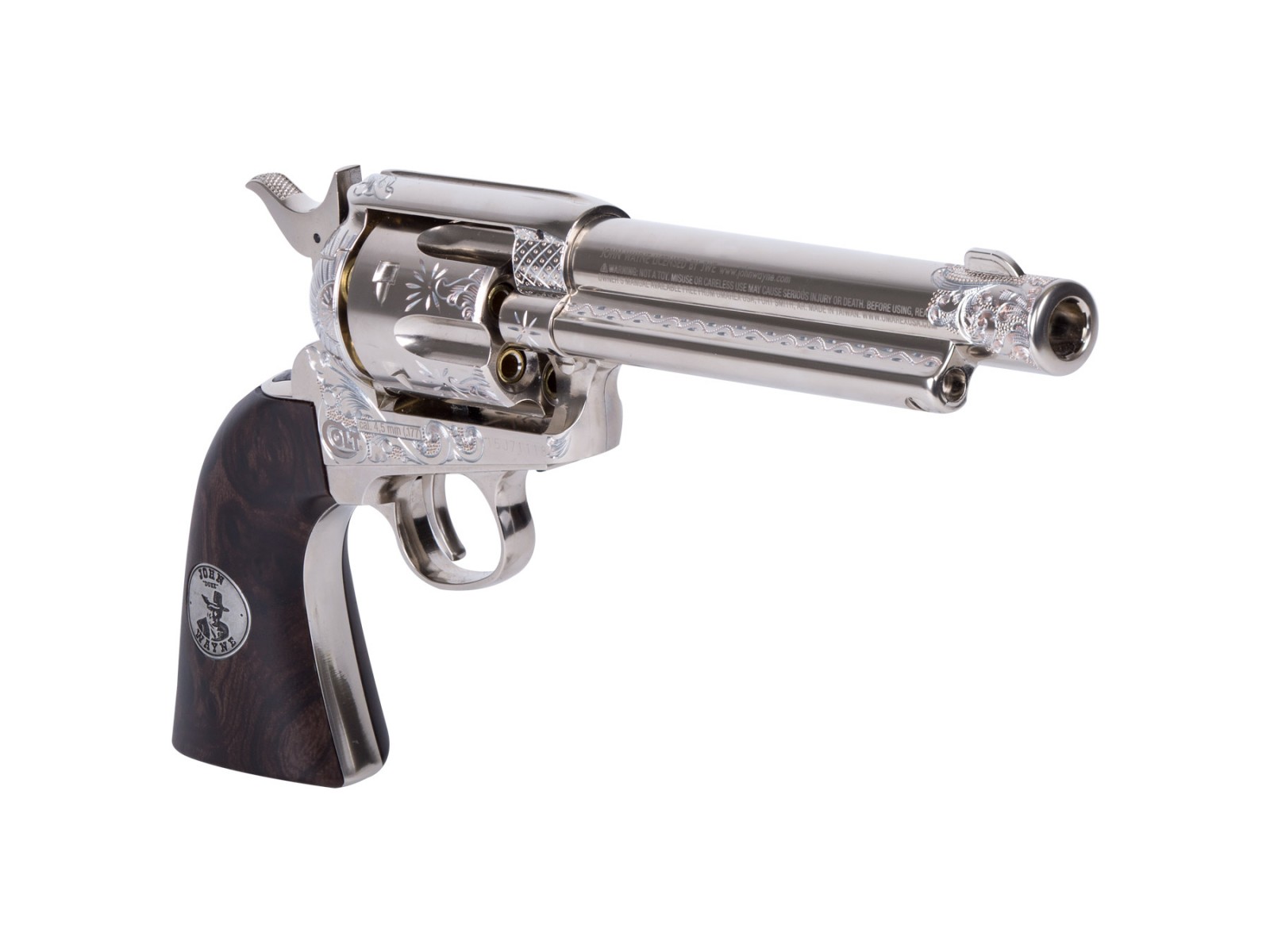 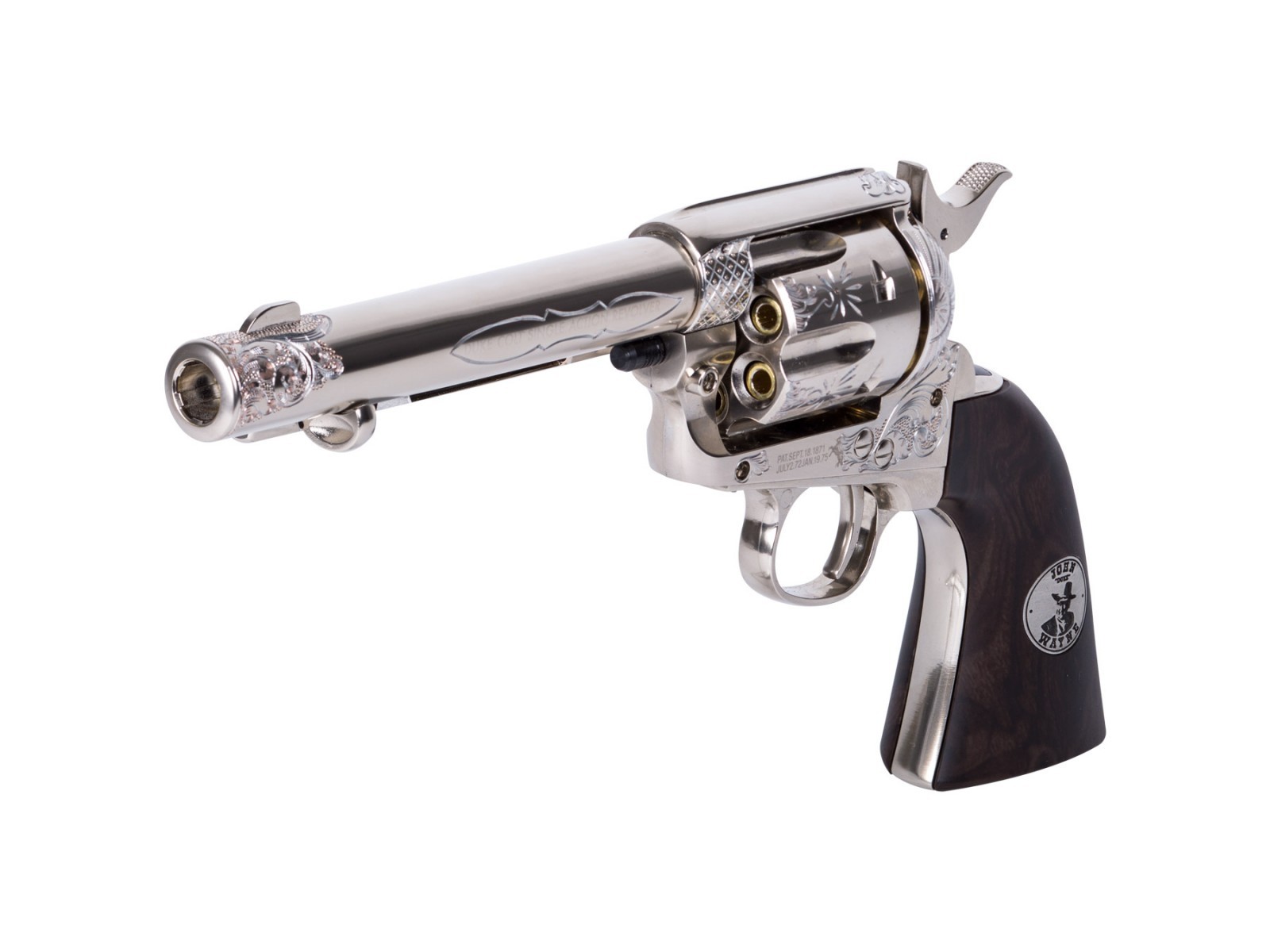 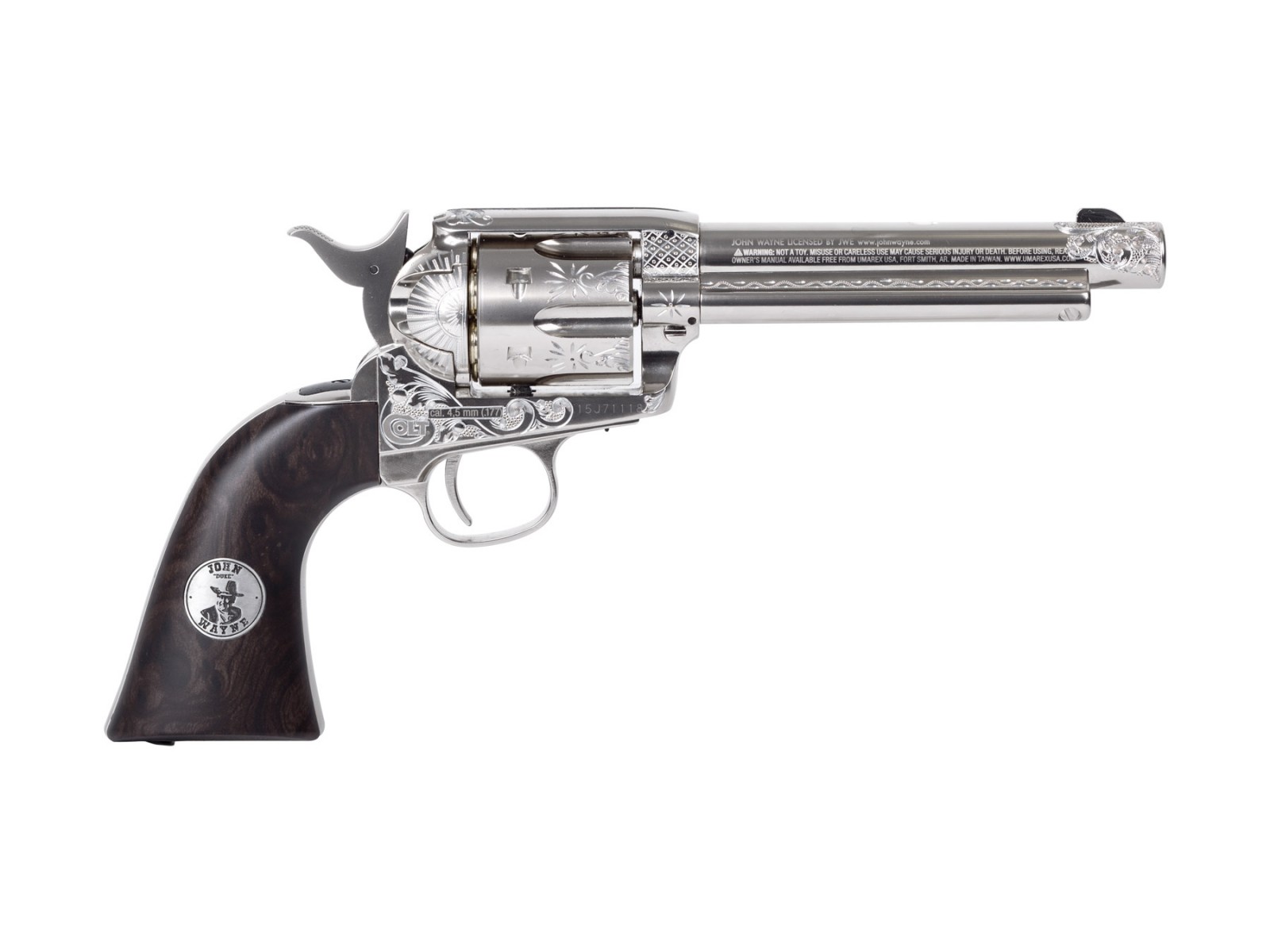 
This faithful replica of the original Colt Peacemaker has just been kicked up a notch with magnificent hand engraving from Conrad Anderson of Rocktree Ranch Enterprises. Only 100 made! Rocktree Ranch has produced exact reproductions of the famous silversmiths of early 20th century Hollywood by creating special dies and molds that produce virtually any of the famous signature silver worn by favorite Western stars/characters Roy Rogers, Hopalong Cassidy, The Lone Ranger, Gene Autry, Shane, Tim McCoy, Ken Maynard, Paladin, Matt Dillon and The Virginian.

The Colt Single Action Army (SAA) .45 revolver is a true American icon and has graced the collections of enthusiasts for 140 years. A favorite gun of the late John Wayne, the Peacemaker sat on his hip in over 100 of his Western films. An Oscar-winning Hollywood legend, John Wayne was also known as the "Duke".

Marion Mitchell Morrison, who weighed a whopping 13 pounds at birth, got his first dog "Duke" when he was nine-years old. Marion and Duke were inseparable and the boy was soon referred to as "Little Duke". To his relief the nickname stuck. Although his billing as John Wayne came a little later, his friends continued to call him the Duke.

To commemorate the legacy of the famous six-shooter and the man who made the gun a symbol of the American West, the replica Duke Colt Single Action CO2 Revolver was built. This replica revolver is a throwback to gunslingers of old and America's favorite cowboy actor, the Duke himself. It's a must-have for any collectors, a great plinker for endless fun, and an effective tool for training new shooters.

Featuring a full-metal frame, authentic action, and synthetic grips that have an inlay of John Wayne, this single shot BB revolver is CO2 powered and includes a 6-round cylinder with a working ejector rod. The 6-shot comes in various finishes and reveals the John Wayne signature on the back strap.

Choose your finish and add an American treasure to your collection today.

Nothing really. I thought the warning markings on the barrel would look bad. But to be honest its hardly noticeable. If you buy from Europe, remember customs and VAT.

I changed the grips on mine for faux Ivory grips with Colt medallions. Made the gun look more real and beautiful.

I finally got one of these... along with the weathered finish gun. Awesome engraving. A keeper for sure! This completes my hand engraved Colt series. Wonder if they will do another version?

For the money... nothing.

If you call them on the phone, you can get one locked in just for you. I tried the request by email when they are available, but it seems to me calling is the best. A side note... Haven't figured out where the number (001 out of 100) is engraved yet. I'm in my 60s so I'm sure I am just not seeing it. If you buy one then let me know where the number is.

Outstanding looks, feel and shoots true to aim at reasonable range. I have to admit though that the 1st one that I got of these Limited Edition Engraved guns was a blued one with Ivory grips and it beats this one on looks hands down. Otherwise they are identical. I just feel fortunate to have been able to have gotten one of each gun.

Not really anything on these guns and that is for the whole line. I now have one of each one available both engraved and also the first ones out in the plain Nickel (Chrome) and Blued and the Blued Weathered. I love them all. I happen to be a great fan of Western style Single Action Revolvers.

I think the key to liking these particular guns is whether or not you like Single Action shooting. If you want fast action, load it up and shoot all day this is not the gun. If you want to "TARGET" shoot then this is Not your gun. Even though the guns are as accurate or better than any other one shot guns. You do not have quite as high a pellet speed as many other tighter revolvers--like the Crossman 357 6" barrel. This is one to buy if you like Single Action Revolver Shooting and you want to practice your shooting with something cheaper to shoot and that you can shoot in your back yard.