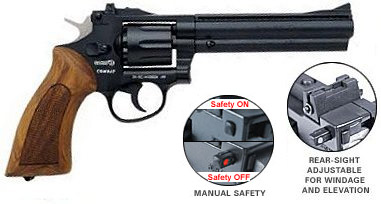 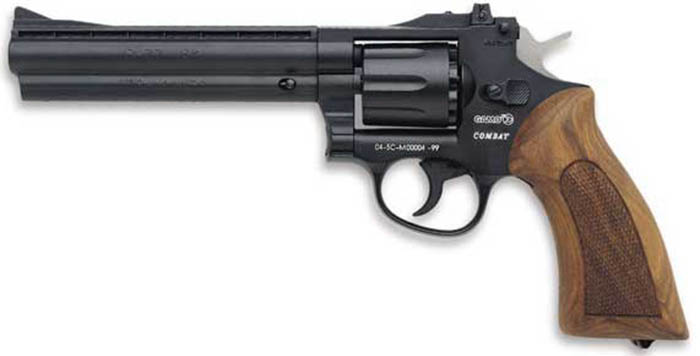 
This pistol looks and feels like the real thing with its 6" steel barrel and beautiful walnut wood grip. Features include a single and double action trigger; cross-bolt hammer block safety; 8 shots in 2.5 seconds at 410 fps; a full length ribbed shroud in the barrel and fully adjustable sights.

R77 Classic 6" Walnut
Ok, so we really dig this revolver! There is something really special about the look and feel of this authentic revolver with Walnut Grips!

The way the grip comes off & on to replace the CO2. The part that secures the grip is shapped like a "U" & has a catch at each end. Unfortunately, one side broke off & even Gamo dpoes NOT carry the Walnut grips anymore. I ordered the plastic/rubber Packmyre style grips, & although they don't look as good as the Walnut ones, the do look great & feel even better! I personally like the feel of them over the walnut grips, but... When I received the new grips, one was broken in the exact same place as the Walnut one was. I am very disappointed & hope that Gamo will resolve this, as this is NOT Pyramyd's problem, & I ordered the grips directly from Gamo.

Despite the issue with the grips, I wouldn't give this gun up for anything! Great looker AND shooter! I would recommend getting this gun WITH the Walnut grips, & also order the plastic/rubber Packmyre style grips, & use the gun with these grips & store the walnut grips for later, as this may increase the guns value later on.