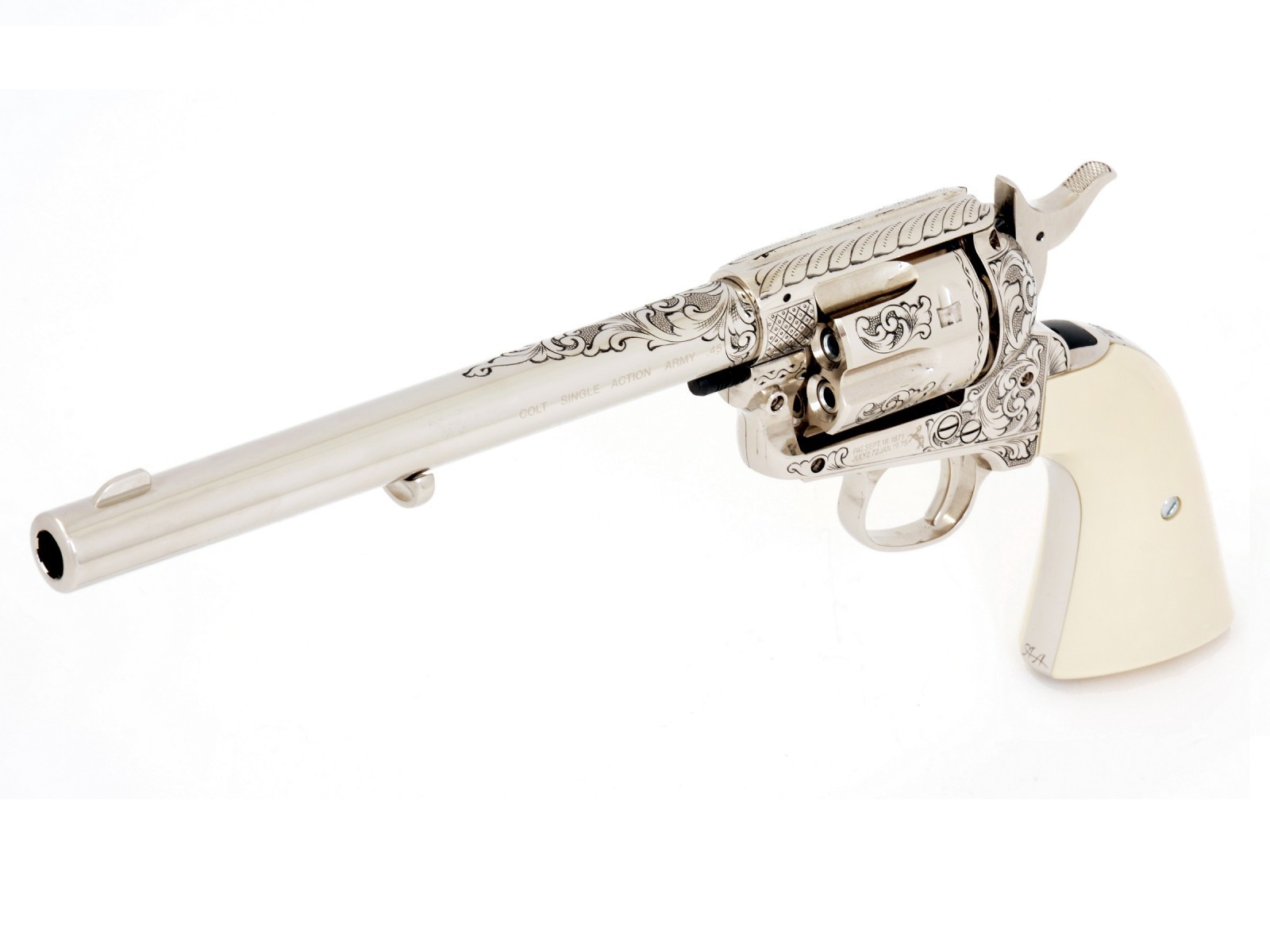 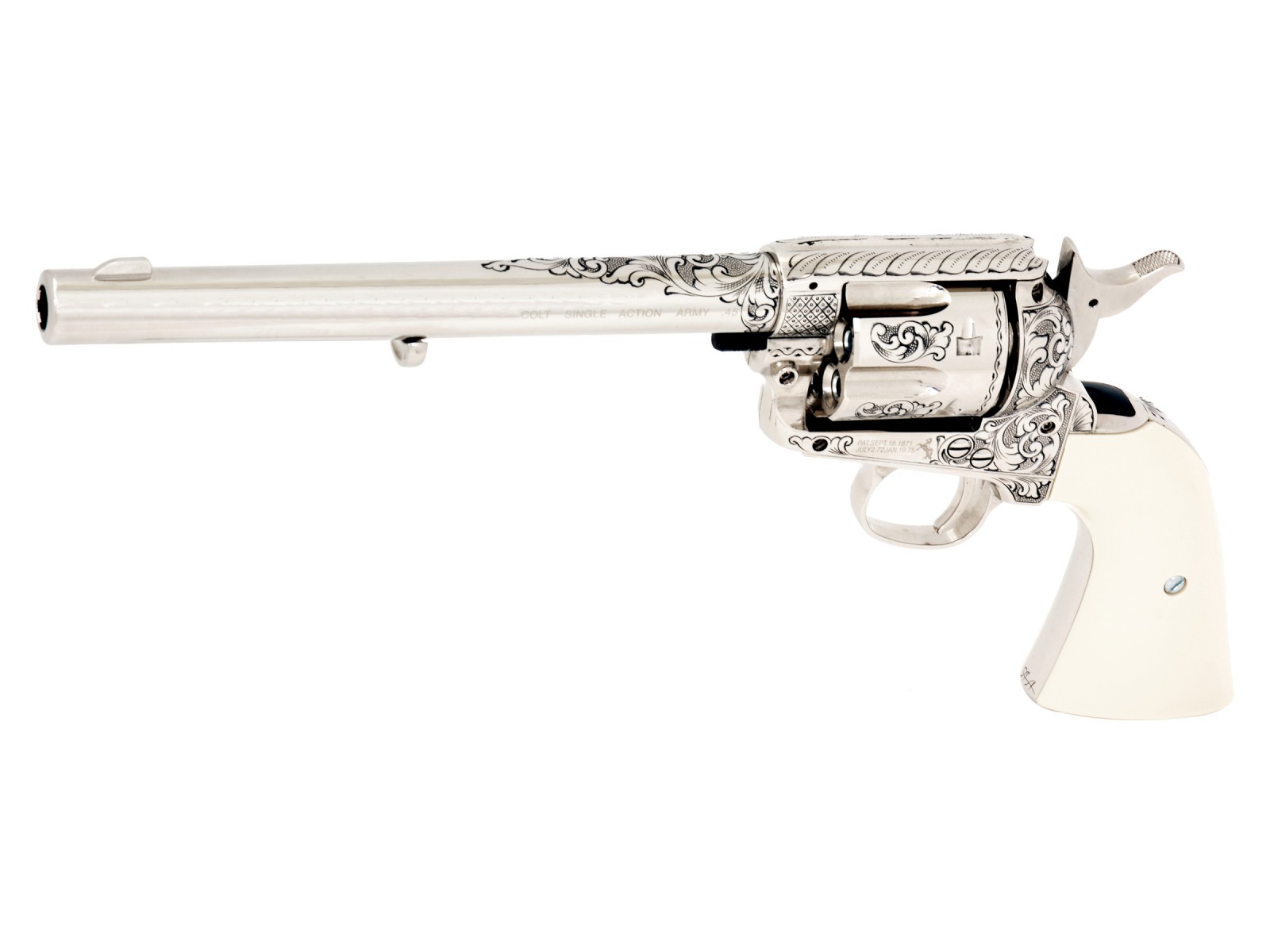 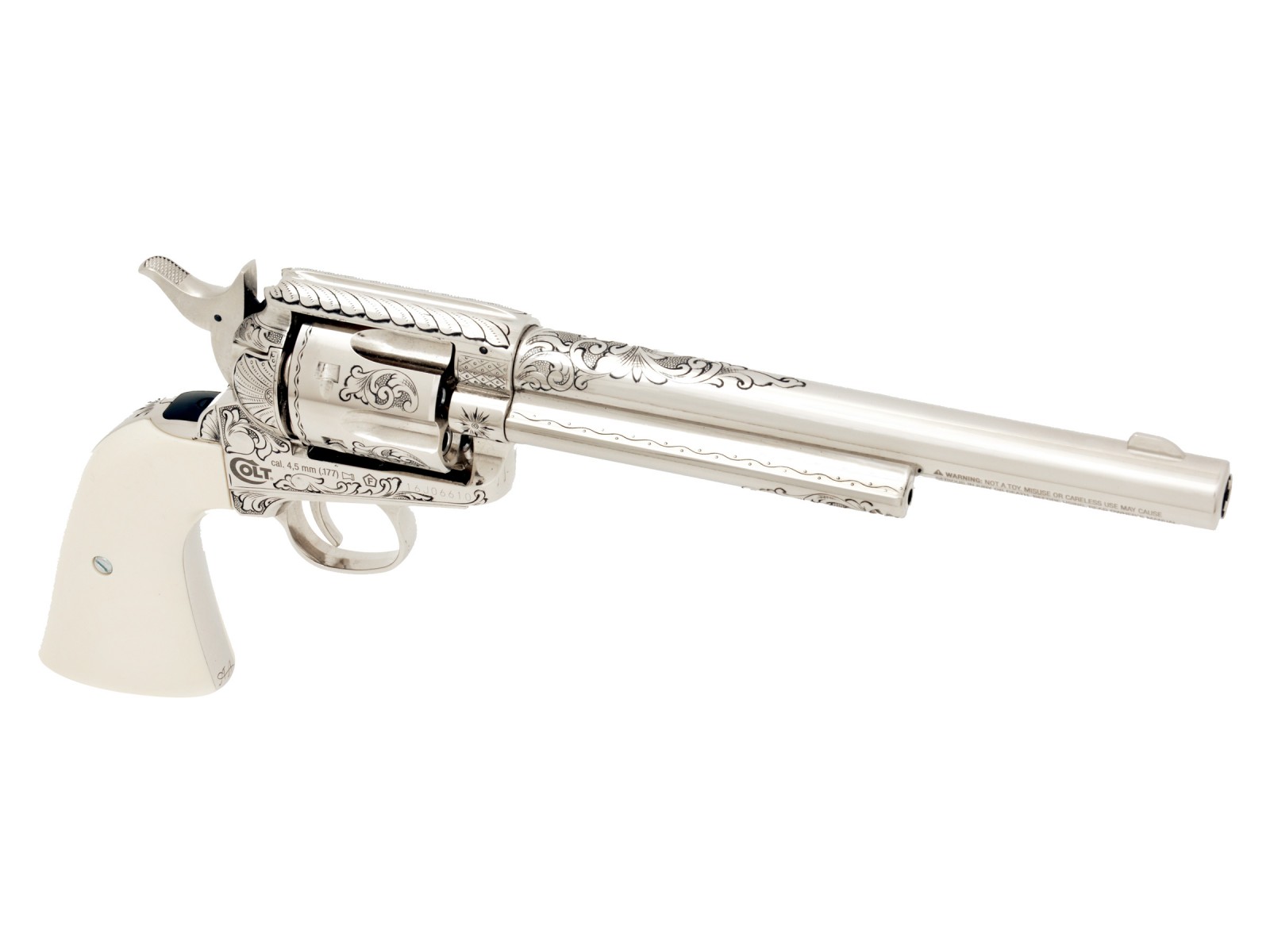 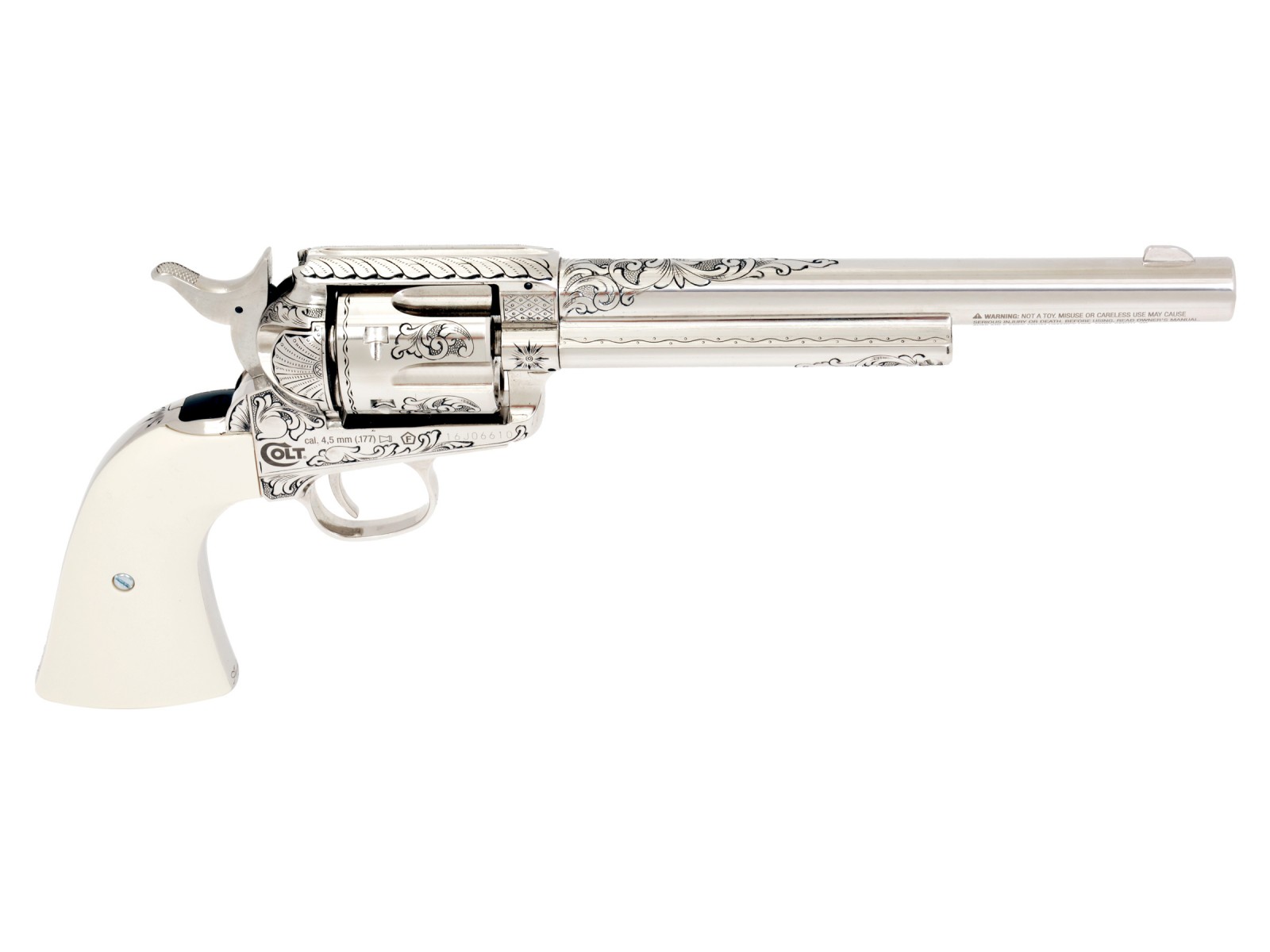 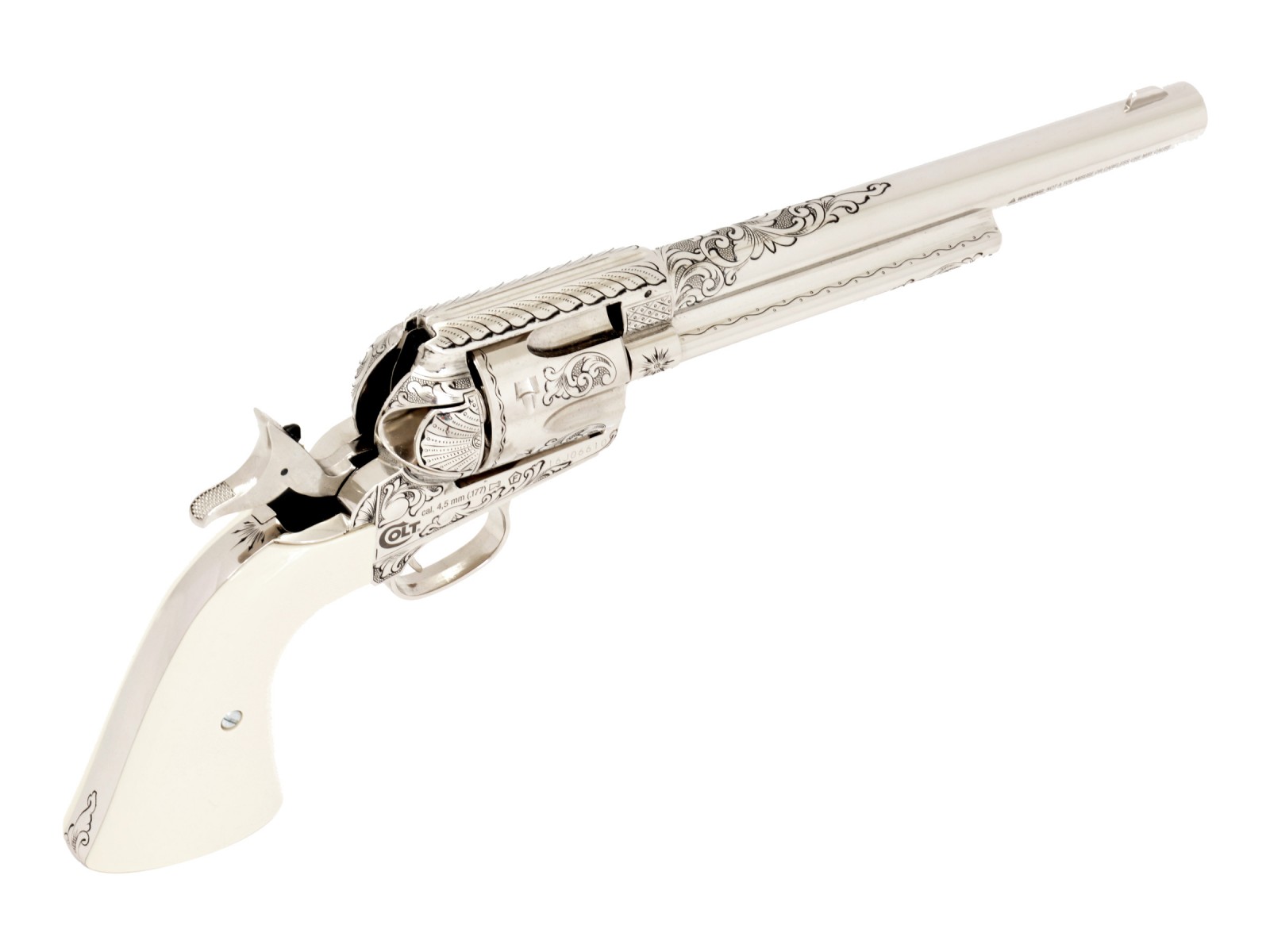 Pyramyd Air is proud to announce the latest Umarex Colt Limited Edition, hand engraved Peacemaker by Adams & Adams of Vershire, Vermont, one of America's top firearms engravers for over 50 years.

The designs on this gun are copied from an original L. D. Nimschke Colt Peacemaker done for New York City retailer Schuyler, Hartley & Graham in the 1870s. It is reproduced here by John J. Adams, Jr. for the new 4.5mm nickel plated 7-1/2 inch Peacemaker pellet model. The revolver comes with white (faux ivory) Micarta grips and has the same L.D. Nimschke engraving patterns as the 5-1/2 inch model, only in an all-nickel finish, with the hand engraving inked in by hand for added detail.

Louis Daniel Nimschke's style, and that of the Nimschke Shop in New York City, was unique in the combination of engraving elements, and extensive use of punch dot backgrounds to add greater depth to the engraving. Patterns were usually a combination of vine scrolls, sunbursts, crosshatch panels (usually on the side of the frame where it meets the barrel), and use of borders or waves and dots to accent ejector housings and frames. This is the style used by Adams & Adams for the Umarex Colt Nimschke Peacemaker. This is the second Umarex Colt model to be engraved by Adams & Adams exclusively for Pyramyd Air. Like the 5-1/2 inch model, this gun will also be limited to just 100 examples, each individually numbered and signed by Adams & Adams.

Everything, almost! I purchased one pellet and two of the bbs', and all three are very, very nice. All three came exactly as described, short on nothing. The engraving is deep and beautiful and covers much of the two bbs' but not quite as much on the pellet due to the longer barrel. I am very happy with them. These however, I haven't shot and don't plan to, so I don't know about the accuracy but I would guess it's as good as the standard models. One more thing, even though I ordered the two bb versions on different dates PA, was able to send them with consecutive numbers, and you can't beat that!

This is why I wrote almost above. A nicer box or certificate of authenticity would have been nice to display with these Colt SAA's but for the price I paid and for all the Adams and Adams engraving that these have on them it was a Great deal.

If you look around you can buy some nice display cases at most gun shows and at very good prices. Buy yourself one of these and then look around for a copy of "Guns of the Old West" magazine, they had a great story about these special editions pistols and Adams & Adams, together you have the 'things I would have changed' covered.

Thank you for your comment!
The "Guns of the Old West" magazine is #92, Winter 2017 issue. You might be able to purchase a copy at; www.gunsoftheoldwest.com
Add comment to this review
January 6, 2018
By michael

A really nice revolver, that is a work of art. Waited a few months but worth it.

Mine arrived in the standard box sporting the standard wood grips. Pyramid is sending the white grips , but I doubt they will have the nickel screws. The revolver should be in a special edition box, and it should be checked before being shipped , which clearly mine was not. It put its' first shot dead on in the center of the bull, so it shoots as good as it looks. I would have added more engraving on the back strap, and a ring around the end of the barrel more like the original engraved Colts

The description states ink filled engraving , but it is not. Still and impressive looking revolver

Thank you for your comment!
The crocuses were minor, and at the end of the day it is an excellent revolver exhibiting outstanding value.
As stated an excellent revolver that had the potential to be exquisite. Still deserves 5 stars. Pyramid sent me the grips. I would still order one , just think there has to be a little more effort. Compared to what an actual engraved Colt Single Action costs it is still a bargain.
All that stuff is wrong, missing or screwed up on a special edition co2 revolver you payed almost $600 for and you still gave it 5 stars all around??? WOW, just wow. I would have returned it if anything short of perfect.
Add comment to this review