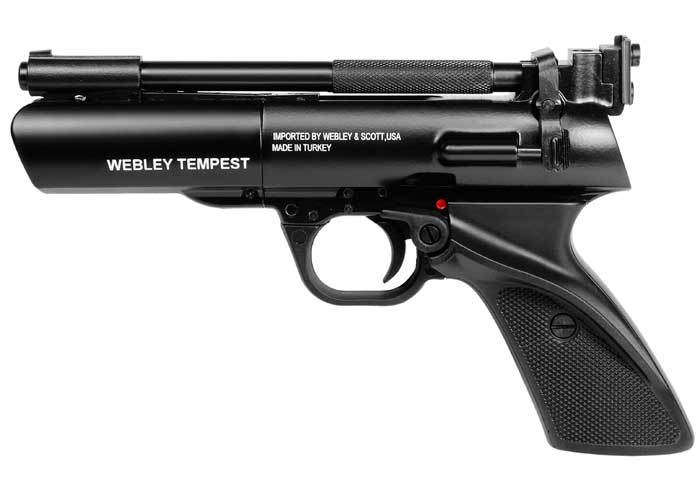 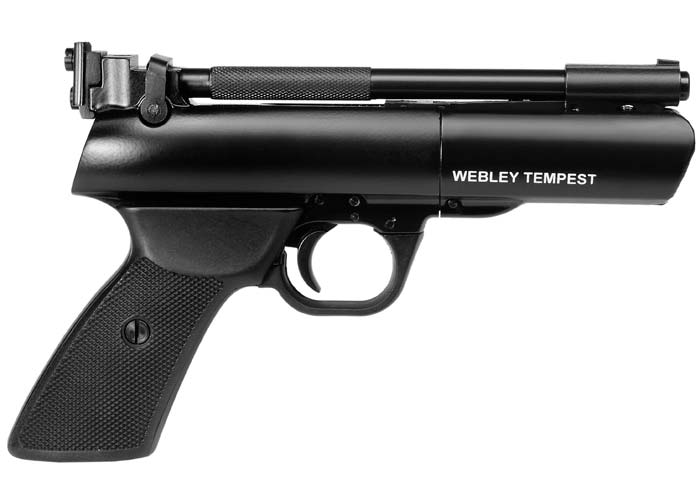 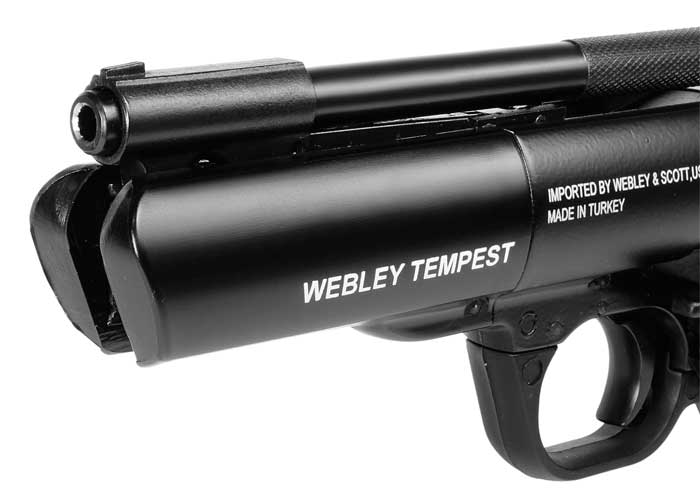 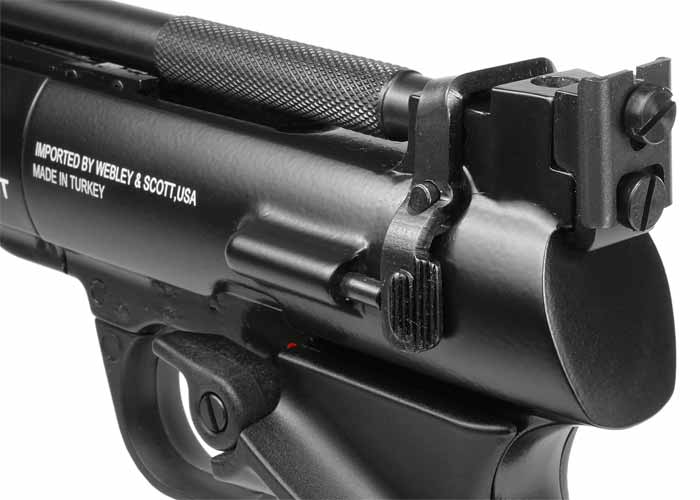 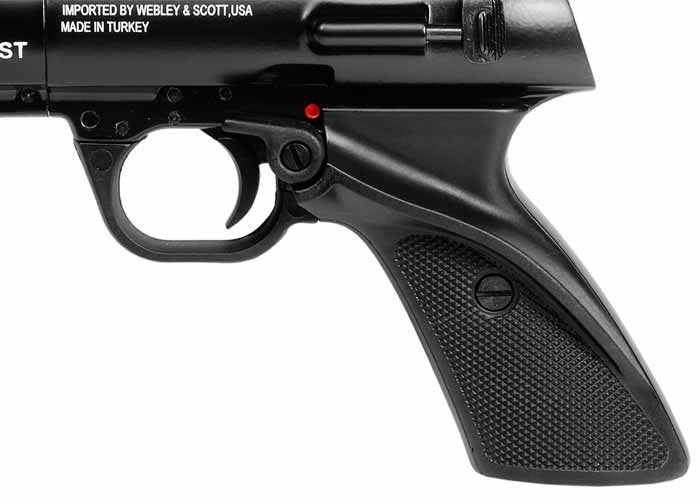 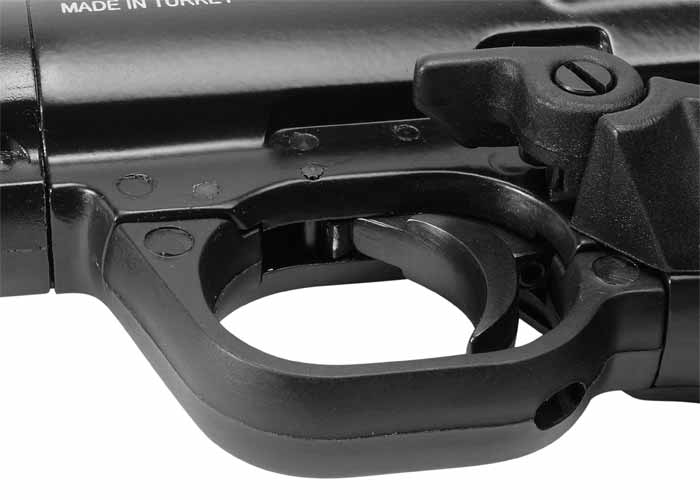 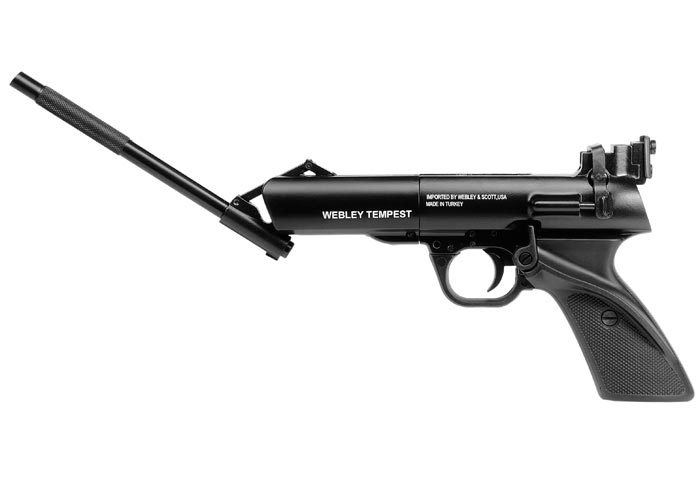 4.5 (92 reviews)
Product DetailsItem comes in various specifications. Check product details to select what is best for you.

A reissue of the Webley Tempest, which originally debutted in 1979, this gun belongs in your gun vault. It's an all-day shooter that will help you hone your accuracy with pistols...and it's a lot fun, too. Ideal for plinking, paper targets, spinners and shooting tin cans. You will never regret getting a Webley!

I purchased this gun about 2 years ago and have fired about 500 shots through it. It feels great in your hand and is fun to shoot.

The Turkish made Tempests just aren't great quality. After about a dozen shots, my breech seat started to leak. I ordered a replacement, fixed it myself, and it's been fine for about 500 shots since. After about 250 shots, one of the aluminum linkage pieces in the cocking mechanism broke, while I was cocking it. Luckily I was holding the barrel when it let loose. I was able to order a replacement part from the UK and get the gun working again, but at this point I've lost faith in it. I just don't trust that this gun is high enough quality for regular use, and I hardy shoot it any more.

I'm able to consistently hit a soda can at about 15-20 yards. This gun just just isn't accurate enough to shoot longer distances.

Had the gun for to many years haha im today 37 years old and had it since childhood where i bought it as a used gun from an older neighbour.its the .177 modle and i still loves it and both me and my son shoots it

i acculy have not had any issues at all with it rather then regular cleaning. i would change information about ammunition as if its a true pellet gun or if you can use round balls as well etc

its a robust lill gun with a low weight but for me tends to tip in front due to weight overall in the gun. but its a true shooter and never failed me rather me failing it with a bad aim. Will give a load of funny memories from shooting alone or with friends and family

There's something innately satisfying about shooting this gun. It's quiet, shoots faster than its size suggests (135 m/s-ish), has a trigger that breaks cleanly and it fits my hand so well, it's a pleasure to just hold. And it looks really sweet with walnut grips. The gun is being made in Turkey since 2005, and the only immediate difference I can spot with a 90's Tempest I had are the grips, the current ones seem to be of higher quality polymer as opposed to the old ones, which were made of shiny hard plastic.

Here comes the bad. Hard to cock, not only because of the awkward motion, but also unusually high friction. You can feel the metal digging into itself (galling). The piston chamber had tool markings, scratches and burrs everywhere (too deep to polish out completely). Then, the barrel. Looking at the muzzle, I could see that the rifling grooves just stopped about half a mm before the end. Completely messes up any accuracy. The trigger. A complete lack of finishing of the mating surfaces of the sear and trigger makes for a heavy trigger pull. The 'adjusting' screw does nothing but add extra spring pressure. My polishing and lubing cut trigger pull in half. The worst: This gun is held together by pins that are so weak that all the load bearing ones were bent! That's the biggest pin that holds the mainspring and barrel in place, the linkage pins and the trigger and sear pins. Pretty unsafe. I replaced them with roll pins and they hold up nicely.

This gun is easy to work on, and it deserves the attention and finishing that the factory didn't deliver. I still love the gun, and after my modifications I feel it should last decades. If you get this gun, make sure to replace the load bearing pins. Also, mine didn't cock smoothly until I lubed it with lithium grease. Didn't seem to like moly grease. Note on recoil: The piston moves towards the shooter, and it rotates the barrel downwards in doing so. That's why the rear sight is so much higher than the front. As the piston crashes into the end, the firearm-like recoil is achieved, neutralizing its initial dive. Because this gun is short, it rotates easily and that makes it pretty hold sensitive. All in all, the Turkey factory really, really dropped the ball on this gun, but at least you still get enough gun to salvage. An investment consisting of some work and some spare parts really bring this gun up to the level it should have been at when it left the factory.