Built on the tried and true S510 action, the TDR (Take-Down Rifle) packs all of the features that small game hunters want into a highly maneuverable and transportable package. Able to break down in seconds, the S510 TDR is built to go anywhere you can.

Welcome to the Pyramyd Insyder, I'm Tyler Patner. Today we have a little bit of a different review for you guys. We're taking a look at a brand new line of cases. I'm totally kidding, the Air Arms S510 TDR in 22 caliber. So the 510 TDR came out very late last year in 2017. We got our first look at it at SHOT Show 2018 and they're finally here ready to shoot. 22 calibers are what we have here to test today and let's run it down. As far as what's in the case here, you do have your manual, of course, you got some Allen keys it looks like they're your traditional Phil probe which is threaded to 1/8 psp so you're gonna want to make sure you get a quick disconnect adapter if your fill setup requires it. Let's see, looking through, so we have our buttstock which is a walnut variety and looks like it has one of our magazines in there, it comes with two and it does have this slotting here that you can put both magazines or a third spare if you want to pick one up into that rear buttstock so that you can keep it on you at all times which is really nice. Got a cutout here for the pellets, and of course, then there we go the meat and potatoes of this, the 510 TDR action. So basically, in a pistol form, I guess if you wanted to call it that. Let's get it all set up here for you guys and go into some detail. So as we go ahead and get this put together here guys one of the things you obviously notice the TDR, the 410 TDR which is a bolt-action, the 510's a side lever action used to come in like kind of a carrying case so now they put it in this hard case. I prefer the hard case, I know a lot of folks out there preferred the softer case that had the backpack straps. Putting the buttstock on here, really simple, you're just gonna go ahead line it up with these holes here in the back. You have a three-prong system, you'll line that up nice and easy, you go ahead push it in and then we're just gonna simply screw it in right at the back here. And you can see that gap closing, it's really easy to do this, takes under a minute to put it all together, actually, I'd say probably 30 seconds. And we are all set, you make sure that's hand tight and you are good to go. You got a 40 roughly 40-inch six-pound hunting package that is a really easy very light very convenient to use.

Let's run down some of the specs here starting at the front, so one of the big updates, the 410 version of this gun was unshrouded unsuppressed, we now have a full shroud with the Qtek moderator on the end should keep things very very quiet having shot like - 510 Ultimate Sporter that has the Qtec already on it this is should be a very quiet setup and hopefully putting out about around 30 foot-pounds with some heavy pellets in this 22 caliber. Down below we do have about a 150 CC cylinder here with a screw off endcap that exposes your fill port and this is the standard Air Arms fill system. Again, that little fill adapter comes with it, you do need to get your quick disconnect, but just so you can see how it works, you go ahead slide that on, you'll line up the hole in the end of the fill cap there with that tee fitting, and then you turn it like that. Keeps it locked on, it's never gonna fly off or come off or come out like a fill probe might on you, so that is a really really nice feature, and again, you got that dust cap there to keep things safe and secure when you don't have it out and ready to fill. On the bottom of the stock here, you'll notice we do have a forend accessory rail. We have a Harris bipod adapter that comes with a little swivel stud, you can throw that in there and then hook up your like UTG bipod or something like that and then you, of course, have a fill pressure gauge on the bottom that reads in bar. This is a 200 bar so 2900 psi fill rifle and again should yield about 30 shots, roughly a thirty foot-pounds on high power. And speaking of the power, we do have a power adjuster transfer port adjuster here which, yep they sure did, they updated it to that five setting system so you have those five discernible clicks as you go ahead and adjust it and you can see you got the plus back towards you right there, and then you got one, two, three, four, so five total settings but that's going to give us probably the ability to do everything from shooting in the basement during the winter all the way to going up to that thirty foot pound mark and going after some small game. So talking a little bit more about the furniture on this gun we do have some walnut wood here both for the four stock and the cheek piece. You got some nice stippling on the grip. The gun looks fantastic, in my opinion, especially with the shroud setup, I really like the look of that fixed suppressor on the end there. And again, I mentioned it earlier, you do have the slots that will hold your magazines, I have one in the breach here but the second one just fits nice and snug up in there under spring tension. Very easy to work with, it just sits right like that so it's ready to go when you need it. At the back we do have an adjusted butt plate, you got a screw right in the back there that you go ahead loosen, you can slide that up and down. It is not adjustable for length of pull through, so that is something to keep in mind. Probably not the best choice for junior shooters, it does have a very full length of pull and again, you have your tightening screw here at the back that tightens the whole system together. Bear in mind that you can't run this as a pistol because you do need this three prong adapter in the back to keep tension on your hammer spring setup so that when you cock it it has something to push against. And speaking of cocking it, we do have a side lever system as I alluded to earlier. It used to be a bolt, now it's a side lever so a lot smoother, they're probably gonna be a lot faster for you guys at home that need to get that quick follow-up shot. So we just pull it back nice and easy to cock it, pull out our magazine, of course 10-round magazines, which are standard for Air Arms, and to decock it if we do want to, you go ahead and you pull the trigger as you hold the bolt. All good to go, very easy to do, and of course we have our standard safety that is on the trigger. I'm not a huge fan of this but Air Arms does it on all their guns and it certainly does work. You put it on safe and it's not going anywhere I would just prefer it to be anywhere but the trigger for myself. But other than that this gun has all the hallmarks of the rest of the Air Arms line just with some updates from the 410 version that we used to see. Got an 11 millimeter dovetail rail on top. We have a Hawk Vantage 4 to 12 by 40 scope on it and we are gonna head out to the range, get some chrony numbers, throw some lead downrange, see how accurate it is and then we'll come back to wrap it up. Let's head out

Alright guys so looking at these accuracy results, of course we tested you know the full battery of pellets, and it was like 12 pellets or something that went through this gun and the two best by far the 18 grain JSPs and the Air Arm 16 grains, basically the JSP 15.8 9s, they're a little bit different but they also shot pretty well; not quite as good as the Air Arms did but a 0.45 inch group and a 0.43 inch group 10 shots half inch accuracy at 45 yards absolutely fantastic out of the S510 TDR. With both the 18s and the 16-grain pellets doing so well at 45 yards from an accuracy perspective we decided to go ahead and chronograph both. What you're seeing with those Air Arms 16 grain pellets is a pretty decent spread overall, you know 71 feet per second is a pretty big extreme spread but the standard deviation from shot to shot isn't too bad. What you're really looking for though right around 170 bar down to about a 130 or so is really your sweet spot of shots where we're getting a good velocity and nice consistent results from shot to shot, and we see the same thing with the JSP jumbo 18 grains as well. A little bit bigger spread overall but you get that extra foot-pound out of it you know 29 and 30 foot-pounds respectively certainly nothing to sneeze at from the power perspective. So, on high-power, this gun is going to deliver plenty of shots at a high power to do whatever you guys want to do from a small game hunting perspective.

All right guys obviously the 510 TDR takedown rifle has a lot of accuracy sub half-inch groups at 45 yards, nothing to mess around with at thirty foot-pounds, absolutely fantastic. Like two things I didn't hit on actually. Obviously it's a low throw Walther barrel as all the Air Arms stuff is and actually looking at the gun and thinking about it, this is fully ambidextrous so if you're a lefty you can get down on this no problem, obviously the side lever can't be swapped but that's not really a big deal, I don't think for most lefties out there, but you got a lot of nice upgrades on this over the 410 TDR. Obviously, the quiet factor is huge on this one as well as that five-step power gesture from the free-form power adjuster that was there before and the side lever of course as well. And then coming with a hard case that's something I like you know I throw it in the back of a truck and you're good to go. This gun takes down or gets put back together in like 30 seconds so it's right there at your fingertips. Overall, very very nice offering from Air Arms here to start 2018 off. Two things I would like to see change going forward. I would love to see a quick disconnect fitting here instead of the T-bar style fitting that they use, and I would love to see that safety mechanism get taken off of the trigger blade. That's just me though, other than that these obviously perform fantastically and definitely one if you are a small game hunter this is one you're gonna want to look at in 2018 and going forward. For the Insyder, guys, I'm Tyler Patner don't forget to subscribe, like, and comment down below, we'll see you guys at the next one. Thanks! 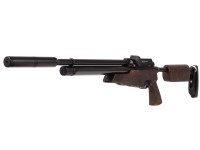