Introducing the TexanSS, AirForce's silenced solution for big bore fans. As easy on the eyes as it is on the ears, the TexanSS features a fully-shrouded carbine length barrel with Sound-Loc System technology. The TexanSS keeps the penetrating power hunters long for, but with quieter shots.

Welcome to the Pyramyd Insyder. I’m Tyler Patner. Today we're gonna be taking a look at a brand new one from AirForce Airguns, the TexanSS and 457. So, we saw the TexanSS at the Shot Show 2017 back in January and now it's finally here. Not a lot of changes from the traditional Texan platform at least from the back half of a gun. You're still talking about a four hundred and ninety CC bottle, the same non-adjustable trigger as you're gonna find on the rest of the Air Force line, side cocking mechanism and single loading, of course, which all functions flawlessly.

The Texan is a tried-and-true platform at this point with the .45 caliber being the most popular of the three. So, the TexanSS made sense to come out in that .45 caliber. Now what AirForce has changed about this gun, of course, is a shorter barrel so we're going from 34 inches to 24 and 3/4 inches and, of course, a full-length shroud system that's gonna sit off the front of the barrel making the total gun about 45 inches.

The moniker SS fits on many of the AirForce guns. They have an EscapeSS, a Talon SS, a Condor SS, and now of course the TexanSS. SS standing for super silent meaning that the gun is supposed to be quieter than the non-shrouded version. Now, with the small bore guns, that's always proven to be very true in all cases they're very, very quiet, but we don't know how that's going to happen with a big bore. Here we have a very large shroud, a lot of volume. It is a very large diameter can here and you have about four baffles inside as best as I can tell that should dampen the noise significantly. Now, I'm gonna guess that we're talking still on the relative loud side for most air gunners out there, probably not going to be a backyard friendly gun, but for those of you that are hunting out in the field, using this in big wide-open spaces, this is going to alleviate the need for hearing protection which is something that, quite frankly, I don't like wearing big earphones and I don't find that the little earbuds do it for me in most cases, especially when you're talking about guns that go over a hundred and twenty decibels for example like the normal Texans do, so this SS model should give us the ability to remove that hearing protection as well as keep a little bit of that silence factor, especially if we're going after some larger game.

Now, we're gonna take the TexanSS out to the range, put it through the normal battery of tests. We got a couple bullets lined up. I've already done a little bit of pre-shooting, haven't put it on our sound meter yet and obviously haven’t chronograph yet for you guys either. So, they're claiming 400-foot pounds out of this and you really shouldn't see any diminished accuracy with that shorter barrel, but we're gonna find out what it does at 45 yards. Let's head out to the range and check it out.

Alright, guys, before we get to the accuracy in the velocities and all that stuff, you'll notice I'm not wearing hearing protection with the SS. It's really not needed in my opinion even though we are in a pretty tight confined space, so if you're gonna be outside, you're probably not going to need hearing protection, at least I wouldn't, but right now indoors with the noise bouncing off the walls, it's definitely a little bit louder than it's going to be outside, and we're gonna throw it on the sound meter compared to a regular Texan and show you guys that difference, but just my take on it, don't need hearing protection which means that SS is doing its job well. So, let's head down range and see what we can do with these slugs.

Alright, guys, so we tested pretty much all the ammo options that we offer here at Pyramyd in this 457 size, came down to 4 that basically did the best for us out of the TexanSS here. First off, they got the JSB, the 234 grain XXL's, about an inch and a quarter group, maybe a little bit smaller than that in 323 foot-pounds, so definitely moving pretty good, although, not our most accurate option, you do have the 350 grainers coming in right again above an inch and a quarter so and generating 431 foot-pounds. That's a lot of power and our most powerful projectile here out of this text and SS, but still not terribly satisfied with the group, and then coming in at 407 foot-pounds is that 411-grain slug. That's a big freaking chunk of lead, guys, pretty impressive results, obviously, three shots with one going into that same hole there. This is gonna be a lot of power and very accurate, but our most accurate is definitely gonna be the 405 grain 406 foot-pounds of energy out of the 405 is about 670 feet per second at their highest. Guys, this is absolutely phenomenal grouping right here out of this Texan SS. Again, about 3 shots is what you're gonna get on a fill from something this heavy, but awesome groups, definitely get yourself some of these 405's and 411s if you're gonna get you a TexanSS.

Alright, guys, you'll notice we use the 357 Texan and not a 457 Texan here for the unshrouded testing purely because it's what we had on hand. The 457 is definitely a little bit louder in that unshrouded version, but that said, if we look at the audio files here, you can see just how much higher those peaks are for the sound on the 357 unshrouded Texan versus the Texan SS, so you know while that 5 DB difference may not seem like that much, it's actually very significant. It's a completely different sound profile which really gives the Texan SS a huge advantage.

Alright, guys, so to wrap things up on the TexanSS here, obviously, very impressive results downrange 45 yards 1/2 inch group basically cloverleaf in them at that 45 yard mark with 400 plus foot-pounds at the muzzle, these 405s, the 411 grain slugs, definitely going to be the ones to get, the 350 SR all right and they do produce a little bit more energy, but I'm sticking to those 400 plus grain slugs. They were very impressive downrange.

Overall, though, I got to say that SS, the super silent, the sound moderator on the end of this, guys, is doing its job well. To be able to take the earphones off and be able to shoot comfortably without any hearing protection is a big plus in my book, and if you're looking for some extra stealth in the field, this is definitely gonna give it to you without compromising too much in the way of power, so if you are going after some big game or if you want to shoot long range with the AirForce airgun the TexanSS is definitely going to be one to check out and compare.

As always, guys, we want to hear back from you. Tell us what you thought of the video and if there's anything else you'd like to see comment down below. Don't forget to subscribe, hit us with that like button, for the Insyder, I'm Tyler Patner, we'll see you guys at the next one. 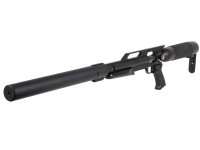