A balance of performance, quality features, and price point, the Chief is Beeman's first foray into budget-friendly, entry-level PCP guns.

Whoo, guys, it was tough but we won the game. So today we are looking at the Beeman QB, which I looked online I couldn't find what it stands for so I decided instead for quarterback and then I realized that's not what it stands for, and it's out of the Beeman QB series. This is the Beeman QB Chief. Now this is Beeman's intro to the PCP airgun. It's a $180 airgun. It is very simple. It's for beginners, it's for people who want to just get in the PCP world without spending a fortune. So taking a look at this gun it's pretty simple, first of all, a very classic Woodstock, very nice, and like a typical rifle, I would say. Rubber buttstock nothing really adjustable on here, but you know as you look at it's a single-shot bolt-action 177, also comes in 22, you've got the rear adjustable sights here, the fiber optics, and the front side up there. Safety, safety is pretty simple, it's it's right here on the backside, so you know when you get ready to shoot you just flip it like that. It's not automatic at all, so when you cock it and load it, it's ready to go. And here's your dial, so you can see how many psi. It only takes 2,000 psi because like I said it's a small reservoir. You do get about 50 shots per fill. Up front, you've got that you snap that off. You got the male quick disconnect there, so works with any female hose, you just snap it on. Very simple we're seeing more and more that in the airgun world which I love because I hate fill probes. We've got it filled up to 2,000, so let's take some shots, check some accuracy, see what kind of feet per second we're getting. They say at the 177 you're gonna get maximum a thousand feet per second. I'm gonna shoot a couple different size pellets here and see what we do alright, see how accurate it is.

All right so here we go I've got the Meisterkugeln in the seven-grain, I've got H&N Sport at the 8.1 grain and I'm gonna have the Kodiaks at the 10.6 grain, I think it's gonna be too much for this gun but you'll see what it does, and I'm gonna shoot it through the the open sights. It does have an 11mm dovetail here that you can mount a scope on, which you can get at Pyramyd. So here we go, let's take a look-see and see what we got starting with the seven grain. 1,214! Now this says this says that they give you get a max velocity of 1,000 fps on the 177. All right 989 ah that's interesting went from 1200, to 989 that's quite a jump. It's putting together a nice little group down there, didn't get a read on that one.

9 54, again pretty nice group. A very nice group, come on Chrony, now that was shooter error, a little bit to the right. Ah there we got 954.1, so mid 900s with the 9 grain. Let's just take a look at the at the 10 grain, that's gonna drop it out about quite a bit but let's see what we've got. Very accurate. So so you're getting is like it's you're getting the 700s with the 10 grain. Now here's the one thing we shot about 20 shots now, and I'm getting close to out of the green, so as far as you know consistently get like, it says up to like, get 50 shots, I don't know if you're gonna get 50 shots on one fill you may get it if you take it down to zero but I got imagine after a thousand, you're gonna you're gonna get quite a bit of drop-off you know. I just want to reach out and see let's just check it out at 50 yards see what this thing can do. I'm impressed, I mean 2,000 psi you expect not a whole lot of power, small reservoir, but this gun has some good power so I think you can, you and you would be able to put to get a group together 50 yards. So let's check it out and see what it can do alright. 50 yards. Golly a 1030.

Yeah 837 that's how that makes a little bit more sense I'm getting kind of low, lower on air but again 993, so this is one interesting thing. I feel like the power's a little all over the place, the guns still pretty consistent 816. So you know I'd say your shot string from what I'm seeing, is about 20-22-25 shots that are gonna be pretty consistent and then it kind of gets a little weird from there. Um that's enough paper for me, I mean the fact this thing that I've got it, I've got a nice enough group at 50 yards with open sights, like I feel pretty good about it. Let's shoot some targets, have some fun, and see what this thing is really all about.

-Bang, there you go that's what I'm talking about. Can! Apple!

Apple. The slow roll of Apple death. I really want to hit this chalk, this purple chalk right here. There! The air is getting low want to see if this has the power to pop a over 100 psi bottle. Boom! Yes it does Beeman QB Chief. There it is guys I mean that's all kinds of target up to 50 yards, this is an intro PCP gun 180 bucks. I don't know what else you want out of it, I mean it's a great little gun, like I said it's only takes 2000 psi, which you can pump up with a hand pump in like less than 100 pumps. That's it for this Pyramyd Outsyder I'm Rossi Morealle, thanks for watching. 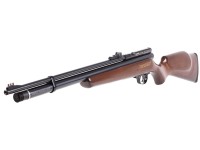