Get the "buzz" on an airgun that breaks the mold. Watch as Rossi tests out one of the most anticipated innovations in breakbarrel tech!

Killer bees on the Swarm today on the Pyramyd Outsyder.

All right now it's time for some trigger time. I'm not gonna lie the bee thing is probably more exciting moving around. Anyway, here we go. Gamo Swarm, it is a ten shot repeating break barrel. Time to blow some stuff up, see how quick we can do it around these ten shots off. Ready? Time starts when I touch the barrel.

Boom Oh let's go take a look at the new Gamo Swarm. Shall we.

Now I know what you’re thinking, it looked like I missed one of those cans. Tomato tomahto. After the dust settled and got all over me and the gun, there were no more cans so I don't know what to tell you. All I know, 10 shots in 24 seconds with a break barrel so let's take a look at the Gamo Swarm Maxxim. Ambidextrous. All-weather, you know pretty indestructible, but you know got some little texture up here to hold on to it just that little bit, it's your basic synthetic stock. The cat right here is the custom action trigger. Two-stage you can customize it. Get the safety right here, I like to safety, pull it back it's in safe, you gotta push it forward for it to shoot so it's right there by your, you don’t have to like reach we're doing weird, it's like right there. I like that comes with the scope 3-9 by 40 scope. It's got the 11-millimeter rail system, the RRR the rail reduction reconnaissance, or some I mean I it's a it's an 11-millimeter rail, it's supposed to take some of the absorb some of the shock. Suppression sound suppression technology. If there's a steel barrel in there it's surrounded and shrouded. I mean as far as airguns go it's not that quiet, but what it does do is it makes for a thick barrel which is cool as you saw how quick I make you smack that thing down and load it which is great. This is the magic I mean this is the, it's a 10-round repeating shot barrel gun. It's got a little magazine here very easy to load. It literally similarly shows you, it's like turn this way, and put the pellet in here. So you turn it there's an empty hole you put the pellet in and it shows you how many punch you got left. 10 counts all the way down to one, and there's actually an exclamation point which means don't shoot anymore. Put it in, you stick it in. It's actually impossible to put it in wrong, don't go in, so the only way to put it in with the pellet face now out now. Let's check the accuracy you know, they say 1,300 feet per second 1 7 7 9 75 on the .22. To that's with air pellets basically. So I mean we're gonna see, we're gonna get I'm using the H&M and I've got the exact the heavy Diablos, let's take a look see what it chrony’s and see how accurate it is. Alright so we're gonna go with the exact heavy diablos 10.4 grain .177 25 yards, let's see what happens.

There you go. And see now, you look, it's got the exclamation point kind of a warning sign like don’t cock and shoot. Not bad 25 yards .177 I gotta say, man this thing is sweet. Let's try it out at 50 yards, see I mean which I know that's a big stretch for .177 but let's see what it can do. 50 yards this is gonna be interesting in the wind.

I mean I'm sure some of you guys can do tighter groups than I can, never claim to be the most accurate shooter but it's got a ten shot repeating break barrel magazine which is awesome. We're just getting started let's go really have some fun. All right we got the Pyramyd Outsyder range set up here. Time to have some fun and see the Gamo Swarm Maxxim.

Just cock and then BAM you're ready to go again. How much fun is that with a break barrel. I could sit here all day and do this. Before I get out of here I gotta try one more time, 10 cans, 10 pellets, 10 shots. How fast can I do it. You guys ready? Can I beat 24 seconds? I think I can let's do it. You ready to see you surrender, see record-breaking shooting, record-breaking shooting here it goes. Tommy ready? Done! 3.7 seconds yeah and that's how you do it. A ten cans at one target shot repeater all cans knocked down in 3.7 seconds. Give it up for your boy. Guys that is it. The Gamo Swarm Maxxim, this gun let me tell you something, this is a good-looking gun, it's got all the things that you want, all the little bells and whistles. Let me tell you why you want this gun. Right here it's the only ten shot repeater break barrel gun. You've seen how much fun we've had, you see how quickly we've been firing off shots, and and it's got some power, 25 yard, 60 yards. That's it you guys can get this at Pyramyd Air. This has been the Outsyder, see you next time. 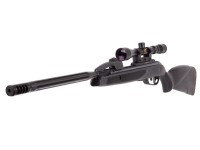