Welcome to the Pyramyd Insyder, I’m Tyler Patner, today we're gonna be taking a look at the Hatsan Nova in .25 caliber.

So the Nova is one of the newer offerings from Hatsan here in the US. This is the .25 caliber also available .177 and .22. In the .25, they're claiming about 46 foot-pounds of energy and about 88 shots per fill. Now this is a 500cc air cylinder. A lot of air capacity and it does fill the 250 bar. But 88 shots is quite a lot, so I obviously we're gonna get this on the chronograph, because I'm very eager to see if it's gonna hit that mark. One way to find out though guys. But let's check out some of the specs on the gun. Up front is Hatsan’s QE technology, that's quiet energy, see it on pretty much all of their guns now. 23 inch barrel under here and then you have the moderator suppressor, if you will, setting off the rest of the gun and it is baffled inside of this chamber here. A very quiet gun for the type of energy we're talking about, you know 40 plus 50 almost foot-pounds. It is pretty darn quiet, I'd say you know 1-2 area in terms of loudness, we'll put it on the sound meter for you guys as well. Moving back, we do have a 500cc aluminum cylinder on this gun. Not removable, you don't need to remove it. Fills via the hole right here and does come with a probe that is threaded to 1/8 pspp which is pretty standard, all the Hatsan guns use the same probe here. We got ours with a quick disconnect so we can just hook it right up to our hose and fill. And as I said, this does fill the 250 bar, so it is a little bit higher than most of the other Hatsan guns as well. And you notice we have a bipod on this gun as well. The gun does come standard with a weaver Picatinny rail on the bottom. It is plastic so any metal bipod you're gonna mount on it, it's probably gonna have a little bit of give in that rail so just make sure you got it tight down very securely, and obviously this one flips forward. Just got to here for the stand, we'll put it on the bags though when we test it. And you also do have some swivel studs as well in the front and the back of the rifle. That allows for a sling as well so you don't have to pick between a sling or a bipod, you can do both with this gun. Also on the underside of the stock, we do have our gauge here so you got the colors displayed there. It's a 250 bar fill gun so about 3600 PSI. Most guns are going to go to about 3000 in the Hatsan, this is one of the ones that goes higher and with that bottle that's why you're getting that higher shot count there, so obviously we're gonna put it to the test, but 250 bar make note of that. And real quick just to show you. The gun actually does come with a fill port protector, which I think is a real real nice feature here from Hatsan. I'm just gonna take the probe and push it on through, but you can see it comes with this little protector so that when your fill probe is not in the gun you're not getting any dust or debris into that probe area, which is a very nice add-on from Hatsan.

So on top of the breech block here, we do have what is very common on the Hatsan guns. It's a split rail and what I mean by that is that you have an 11 millimeter mounting option for the dovetail and then a weaver mounting option. Because it's not standard Weaver spacing though, I would recommend going with the dovetail setup, it's gonna give you more freedom to set the scope to the proper eye relief for you. So the Nova, like a lot of the other Hatsan PCPs, is a side lever. I like it a lot, it's not very fancy or anything it doesn't look very sleek but it works, it's very functional. Side lever just comes back like that, straight back into the cockpit and you will know you also have an automatic safety as you find out with most the Hatsan guns. Not a huge fan of the automatic safeties on PCPs. That said it's located in a place that when you do shoulder it, you just flick it off, it's not very difficult. And our magazines are the standard Hatsan mags, now these are 9 round magazines and the gun comes with three of them, so that's a lot of shots right out of the box, and Hatsan knew you know with the extended shot count of the large bottle on here and higher fill pressure you're gonna need a bunch of mags, so they just went ahead and gave them to you. Now to load these magazines, very simple, you see you have this little catch lever here, you're just gonna pull it back and lock it into that upward position. Throw your mag in there and then you just flip it down, and once it's positioned right, this will snap back into place holding it. You may have to rotate the mag just a little bit to cycle it to that next position so you can get that bolt back through, but very easy to load, simple mechanism once you do it once you'll never forget it. The Nova does feature Hatsan’s Quatro trigger, very crisp clean let off on this trigger and it is adjustable so I mean you can you know work with it to get it set up for you. I think as a hunting trigger this is actually one of the better triggers on the PCP market, so picking the gun up here, you'll notice obviously Turkish walnut stock. You do have some nice checkering on the grip and the forend of the stock. It's very fine though, it's not giving you too much feedback tactile-wise, and a raised cheekpiece, adjustable butt pad, it's got all the hallmarks of a comfortable gun here. Let's get out to the range, see how she does. Let's go shoot.

Alright guys, so we went through about six, seven different pellets in .25 here. Ended up going through all JSBs just purely because they shot the best. The King's the 25.4s, they did pretty well, not great, you know six of those nine shots are in within about three-quarters of an inch, so I think it's gonna be gun to gun in terms of which King it likes best. But obviously the Mark two heavies, whoa, half inch, I mean this is by far the pellet to go with in the Nova, and this Nova in particular. I think you get a lot of reasonable groups, and obviously the big surprise I think for myself and probably most of you guys as well are these Predator GTOs. I've been trying these than a lot of guns lately, and they did quite well in the Nova, about an inch group there for nine shots, it's pretty damn good, you don't get a whole lot better than that. Obviously the King heavy just blew everything else out of the water, so we're gonna use those for the chronograph testing, see how many shots we get, and then we’ll do it for the sound testing as well.

So looking over our chronograph numbers here, now you notice we started shot 30 and 220 bar here on this graph. That's because when we filled it to 250 bar, the velocity was right around 650 feet per second or so and it actually came up into that 700 range. So really those first 30 shots are pretty useless in my opinion, but as you go that's when you start to see things even out, and as you guys can see we got a 92 shot sweet spot, pretty much between 725 and 750. Those 92 shots are super consistent now Hatsan obviously rates this with 88 shots, but we're getting 92 in the sweet spot, 140 total from 220 down to 100 bar and that's within 50 feet per second. For an unregulated gun, super impressive.

Well guys the Hatsan Nova, you saw it on the range, performed very well. This isn't my grocery list, this is the shot string, I mean this is ridiculous, over 140 shots on this thing within fifty feet per second which is like seven or eight percent variation from the high velocity. This is obscene, like I'm stunned by this. Hatsan blew away even their own claims on this one so. Very impressive they're obviously accurate, half inch, this guns got a little bit everything. It's not the most powerful in the Hatsan lineup but you feed it the right pellets and 42 foot-pounds in .25 caliber is gonna be more than enough for almost anything you're gonna do. Definitely check it out and my only gripes with this one though, length and the weight or just it’s it's a bulky gun so know that going in. Certainly got the performance to back it up and well worth it you know, for that kind of middle-of-the-road price point. And this Leapers UTG bubble leveler scope, I'd also check that one out, that little bubble level inside makes it really helpful for making sure you're aligned, and you're not canting the rifle every shot. Overall I think this set up as a whole if I was going to be shooting maybe a little bit longer range or going after game from a fixed position, this would definitely be on my list of considerations. But for the Pyramyd Insyder, I’m Tyler Patner, we’ll see you at the next one. 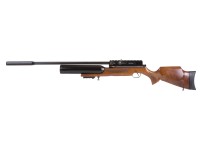