From the powerhouse of Turkish air arms comes the Hatsan Proxima air rifle. Powered by a Vortex gas-piston powerplant, the Proxima is ready for hours of backyard target shooting and small game hunting. This air rifle’s greatest asset is its ability to quickly fire repeating shots, thanks to the 2 included spring-loaded rotary magazines. With a cock of the underlever, you’re ready to fire again and again.

Welcome to the Pyramyd Insyder, I’m Tyler Patner, today we're going to be taking a look at the Hatsan Proxima .22-caliber.

The Proxima is Hatsan's latest offering and it's available in .177 and .22-caliber. Now the big thing here is the fact that it is a repeating underlever gas piston rifle. A lot of features packed in there but that repeater’s gonna be the big one. Obviously we saw Gamo come out with the Swarm earlier this year and Hatsan has followed suit here with an underlever which means we should be getting really good accuracy out of it. Let's check out some of the up-close features of the Proxima. Starting at the front of the gun we do have a really tall front sight here with the red fiber optic in there. Now I can tell you that this isn't going to come into into you know your view if you're using a scope with high rings, which I had to on this rifle, also we went with a mini SWAT scope here purely because the front sight comes into play in terms of the length the scope. Overall you're gonna have a lot of options here but we just went with the SWAT to make sure there were no clearance issues and obviously that front sight not coming into view on that highest magnification setting of 12 power, I did mount a three to nine on it as well to try that out even on nine couldn't see anything, on three you do catch it a little bit, but it's not going to impact your shooting. And you guys will notice on this kind of plastic molded piece here that also houses the underlever you do have your release for that underlever, so you just slide this brass piece forward and kind of pull down on the lever itself at the same time to go ahead and release it which is gonna allow you to cock the rifle, and then once you're done and ready to go ahead and close it up, it just snaps forward and back into place. Really easy to do. Sliding back a little bit further we do have our rear fiber optics site which is micro-click adjustable and you have the green fiber optics here to match up with the red up front. Very stout unit, you can remove it if you want to, just a couple screws no problem, so you can mount a longer scope if that's the way you want to go, although like I said you're gonna have a couple scope options in terms of length that you can go for that aren't gonna come into contact with that rear sight. And going on to scope mounting, you have Hatsan standard 11 millimeter and weaver style rail so you do get the best of both worlds there, and you can mount whatever you want. I went for a dovetail setup, just what we happen to have, but the weaver style mounting is no problem as long as your scope has enough tube space to accommodate the non-standardized spacing between those mounting brackets. And just on the right hand side of this rifle you will notice this anti-beartrap release lever. So what this is gonna do is when you go ahead and cock that rifle, this is gonna engage and actually not allow you to bring that cocking arm back up forward until you depress this. We'll show you guys how this works once we get the mags loaded and everything and show you guys the whole process of how that works. It's fairly easy to do and as long as your hands aren't too small to get around the stock it's not really going to be a problem in terms of being able to depress it and fold that cocking arm back up quickly. The trigger is Hatsan’s Quatro triggers so fully adjustable you're gonna be able to get this to a very nice feeling place for yourself. Right out of the box it's a little on the heavy side and there’s definitely some creep there but knowing that you can adjust that out more than enough to keep up you know my mind at ease there and I've used the Quattro triggers many times, it's a very solid trigger especially for those hunters out there you know what you're gonna get and it's going to break clean, which is always very important. And up top at the very back of the action we do have an automatic safety here that is going to engage every time you cock the gun, so keep that in mind there as well. And you will notice here we have a gorgeous walnut stock, Turkish walnut of course, just beautiful detail work on this stock. It's got a very dry oil finish, it's not, you know, doesn't have a gloss finish or anything like that on it, but it works really well with the rifle I think, you know with the kind of matte finish they have on the metal, it's a very good-looking gun. That thumbhole style pistol grip with the finger grooves on there fits my hands really nicely. You got the adjustable cheek piece here which is also a great feature, just two screws to adjust it up and down to get the height perfect for you. Rubber butt pad, of course, and even a storage slot for your second magazine, which is awesome, and the gun does come with two as I mentioned before, so really nice feature there, and you also have swivel studs here, one on the back and one in the front on the side there to mount the sling that does come with the rifle as well. So a lot of features packed in here to this Hatsan Proxima, but without further ado guys, we're gonna head out to the range and show you just how well this gun works.

So loading the magazines up here for the Proxima, you're gonna take the face, rotate it with the cassette ,you see everything moving counterclockwise around there till it gets that stop, and you flip it over, now we see that hole there, we're gonna go ahead and load the first pellet skirt first, so we simply take it and put it in skirt first until it drops in then we can let everything go. It's retained under spring tension, we don't have to worry about it anymore. Now we can go through and load each one of these with the pellet head first and just rotate on to the next one until you are all loaded up with 12 rounds. First step to loading the Proxima, we're going to go ahead push this brass pivot forward and then release our cocking arm. Now we're gonna go ahead, cock the rifle, forty-five pounds of cocking effort is pretty stout and you guys will notice that, that frees up the breech. The probe is out of the breech now and we actually are retained by this bear trap. We're gonna take our fully loaded magazine, go ahead you see the indent here on the back, we're gonna line it up right there, slide it in, it is good to go now. Once you have your magazine in, you're gonna depress the anti-beartrap lock here, go ahead and close the cocking arm up, and you are good to go. So this next part is really important guys, Hatsan nailed this next part and this is what a lot of companies in the past that have done underlever repeaters in spring or gas piston have failed at. This magazine will actually not allow you to dry fire the rifle with the magazine in place once it's empty. So you notice this is an empty mag and it's actually covered there in the hole that the probe goes through, so that means you're actually not gonna be able to close that cocking handle when you actually have this rifle cocked with an empty magazine. That's huge. So that means you're gonna know exactly when you need to go to the next magazine to continue shooting.

Alright guys, so with everything shooting basically three-quarter-inch groups at 25 yards, we're just gonna skip ahead to the 45-yard results here. Two-inch group out of the H&M barracudas, not very good. You got an inch and a quarter group for all five shots out of the H&N field target trophies with four of those actually going into basically a half inch groups about 45 yards, that's pretty solid, but still I'm gonna have to give the nod to those JSB 18.1 three heavies. Three-quarters of an inch basically a very similar group to what we saw at 25 yards. The Proxima’s definitely got accuracy all the way out at 45 yards, plenty for a small game, so good marks on accuracy.

Alright guys, let's give the final thoughts here in the wrap-up on the Hatsan Proxima in .22-caliber. Overall obviously group wise very good shooter and very consistent chronograph numbers as well. Sub 1-inch groups at 45 yards out of just about any springer gas piston rifle is on the money for me. About 20 foot-pounds of energy not too bad in terms of power so small game hunting is gonna be no problem with this. A couple of gripes I have, obviously the gun is very heavy. Over 11 pounds with the scope that we have on it and it is a bear to cock as well for a multi-shot gun. You're talking about 45 maybe 50 pounds of cocking effort here for that vortex gas piston, so it is not an easy one to cock by any stretch so know that going in. And that does really make getting those repeating shots off quickly a big challenge in my opinion. I do love the fact that they have an adjustable cheek piece on the rifle, and the stock ergonomics here are spot-on, even though it does have a little bit of a long length of pole, it's very comfortable once you get used to it, get that scope mounted properly for yourself and that cheek piece set up, and you're gonna have no problems getting along with this gun, assuming you can hit that 45 to 50 pound cocking mark. So that's a Hatsan Proxima in a nutshell guys. Thanks for joining us today here on the Insyder, I'm Tyler Patner, we'll see you guys at the next one.

Hey guys thanks for tuning into today's video. If you want to see more insider videos, go ahead hit the subscribe button. If you liked the video you saw, hit the like button. And if you want to talk more about the video or another video you'd like to see, comment down below. Thanks for watching. 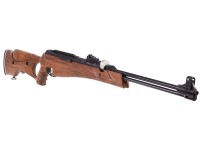