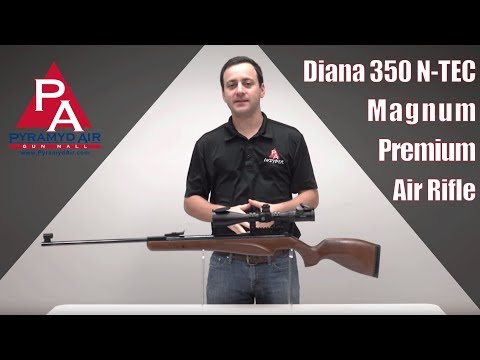 This model is ambidextrous and delivers stunning power along with notable accuracy. The handsome stock has checkering on the grip and forearm for added shooting comfort.

Welcome to the Pyramyd Insyder, I'm Tyler Patner, today we’re going to be taking a look at the Diana 350 N-TEC.

So as the name suggests this is the N-TEC gas RAM version of the 350. One of Diana's latest offerings. They came out with the 340 year or two ago and now they have the 350 version, so the more powerful gas RAM. This one here is in .177 so this is gonna be a super Magnum by all definitions. It also is available in .22 so definitely check that out. Personally that would be my choice in a gun because it's going to give you really the most the power that the gun the platform itself can provide. But a .177 is what we have here to test today, so we'll see how she does. So go over some features for you guys. Starting here at the muzzle we do have a hooded front sight that does look like it accepts some inserts, although the gun didn't come with multiple inserts, it's just got a standard post in there and that matches up really nicely with your rear notch sight there. So the open sight’s certainly usable if you want to go that route, although again to see your best accuracy like we always tell you guys, the scope’s going to be the way to go. But the rear sight here does have micro click adjustments and they are very audible actually, you'll probably hear them now. So the open sight’s a very nice unit if that's the way you want to go. Nice pairing with the gun overall and there's no fiber optics, and I know a lot of folks like that and you got that thin post in there it's, it's actually really quite nice and actually how I broke the gun in first hundred shots or so I took with the open sights.

The 350 N-TEC has the T zero six trigger unit which means you also have the T zero six base rail on it as well which is an 11-millimeter dovetail rail. Now we found that our gun had some barrel droop, I would imagine that's probably fairly consistent seeing as most of the spring versions do. Just you know it'd be a fair assumption to say that the gas RAM versions are probably going to have a little bit of barrel droop as well so we went ahead and mounted the DNT zero six base from Leapers. It's a very nice unit, goes from a dovetail to a weaver setup. Nicest thing about it though, it has two stop pin holes one in the front one in the back that match up with the stop pin holes on the rail so you are good to go, it's gonna lock you in nice and tight. Also, four screws on the side here make it very sturdy. And then on top we went ahead and mounted a Hawk Air Max 34 to 16, it's one of my favorite scopes so we use it for a lot of the reviews here, and obviously it's held up very well so far on this rifle so nothing but good things to say in that regard. So as I said, gun has the T zero six trigger, probably the latest iteration of the T zero six that I've ever felt, and a lot of these Diana's that we're getting these new N-TEC versions seem to have very very light triggers from the factory. Personally I'm a fan. You may not be. I gotta figure this is between a pound, pound and a half, somewhere in that range but it's really nice to know that the T zero six can go down that low safely as well as be set up higher in that three-pound range like a lot of the Artemis branded guns come. A same trigger unit but you know a lot of adjustability in that, so you can fine-tune it for yourself which I like a lot. And of course, we do have the automatic safety which is a hallmark of the break barrels and piston guns in general from Diana. And always you can manually set it but it does automatically set itself on safe every time you cock the barrel, so that is a nice feature as well in this particular rifle. Easy to flick off with the thumb there when you're ready to go.

So for those of you guys that are familiar with the 350, the spring version, probably the biggest departure you're gonna notice right away is this stock. So this is the premium version and you can already tell it's got some different lines to it. Obviously with the raised cheekpiece, which is totally ambidextrous on both sides, really like that, and then it rounds out at a nice rubber butt pad here to mitigate some of the recoil and this one does jump pretty good being a Magnum spring gun. But we also have checkering here on the grip and the forearm. Overall, I actually really like the shape of this you know the way it kind of thins out and comes up a little bit so you can get more of a comfortable hold on it out further away from the base of the rifle, which you know rifle that balance is somewhere about middle of the four stock. This is actually quite nice in my opinion, just the overall feel of it, you know it's got a very comfortable feel to it but solid. So 350 N-TEC comes in around seven pounds unscoped. Once you add the scope, the rail up there, obviously you're gonna be right around nine pounds or so at least in this case, there are certainly lighter scopes out there if that's the route you want to go. But various options that's all going to vary on your setup, but this one's coming in right around 9. Overall nice feel, got a very solid recoil to it, comes straight back into the shoulder. But you know what let's head out to the range. Let's go see how she shoots.

All right so we tested about 15-16 pellets for this. The H&N Barracudas, and I assume the Barracuda matches, well I just didn't have them on hand to test, and the JSB heavies were my two best pellets. So at 20 yards starting off with those JSBs open up a little bit but about 3/4 of an inch here. Not a bad group at all, 5/8 ¾. But a half inch out of the H&N certainly much better, and yes in case you're wondering that was all me. At 45 yards the groups actually were not too bad. I had this one that first shot fly on me there with the JSBs, you know what are you gonna do. Magnum spring down like this, really hold sensitive, so that's probably part of it and then again you know there's always the human error in there. But a 5/8 group out of those H&N. This is, I, you can't ask for better than that to be quite honest with you. So 45 yards, I am very impressed.

All right guys we're gonna take our most accurate pellet the H&N Barracudas, I imagine the Barracuda matches will work just as well for those of you that are wondering, and run them across the sound pressure meter here. We got it all set up, we'll take five shots and see what our highest reading is.

So at 106.3 3 decibels, probably a little bit too loud for most backyards. That's gonna, your mileage is gonna vary, obviously you know if you have neighbors really close by this is probably gonna be a bit too loud, but you have a little bit of property to play with, I think this will do just fine in the yard.

Alright guys you've seen it for yourself, the Diana 350 N-TEC even in this fast shooting .177 is quite a rifle. A really solid trigger, accuracy out to 45 yards more than enough for small game hunting, and certainly plenty of power to do it, upwards of 20 foot-pounds in the .177. I'm actually itching to get my hands on a .22 to see what kind of energy that's gonna put out. But overall I am very pleased with this rifle. It's really nice to see another manufacturer coming into the gas RAM market with a higher end gas RAM gun and I think the 350 N-TEC certainly hits all those marks. So definitely one that you guys should check out. But for the Pyramyd Insyder, I am Tyler Patner, we'll see you guys at the next one.