This is the final test to determine if the BAM B40 is worth buying. In part 1, we saw that the quality of the gun is very high for a Chinese airgun, and there are several areas for concern, such as the woodwork. In part 2, we learned that the gun is just as powerful as a TX200 Mark III, but it has a too-light trigger with no second stage. Today, we’ll shoot it off a bench for accuracy.

Windy day!
This was not a perfect shooting day, as the wind was gusting from 7 to 12 mph from the 3 o’clock direction. I waited for the calmest air I could get, but the wind was always blowing. And, this part of the country is very dry, so the gnats and flies were out in force. They kept flying into my eyes to drink the moisture, and I have to say it’s incredibly difficult to hold steady when there is a gnat crawling around inside your eyelashes. So, instead of 40 or even 50 yards, I set up the range at 25 yards.

The TX 200 was my control
I shot the TX 200 Mark III under the same poor conditions that the B40 faced. My TX has known accuracy. Although the conditions were hard, its groups would be the baseline for accuracy. Both rifles were scoped with Leapers 3-9x scopes, so neither one had an advantage. The TX was already sighted-in, but the B40 was not. I sighted-in at 10 yards. After a handful of shots, I had the rifle printing close to where I wanted it.

Then, the target was moved out to 25 yards. The B40 went first. From the sight-in I knew it was going to be a good shooter because it was putting all the shots into one hole, but 25 yards would show just how good it was. I shot JSB Diabolo Exact heavies, Gamo Magnum pointed, Beeman Kodiaks and H&N Field & Target pellets. The JSBs shot best in both rifles, as I thought they might, but it never hurts to check.

The first group of five JSBs from the B40 went into 0.737.” Under the circumstances, that wasn’t too bad. The next group went 0.780.” Then I tried Kodiaks and the other pellets, but it was clear that the JSBs were the best. The final group of JSBs went 0.619.” 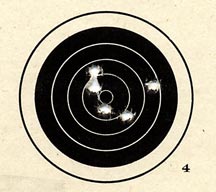 Five JSB Exact domes from the B40 went into a group measuring 0.619″ center-to-center at 25 yards.

That super-light trigger!
Concerning the trigger, I found it easier to use off the bench than I have reported thus far. I’m now certain it releases at under 4 oz., but the pull is very long and that gives me a measure of control. I don’t think it’s unsafe, but I do wish there was a positive second stage. A hunter will have to be very careful with this one.

Now for the control
My TX 200 Mark III has had thousands of shots fired through it, and I have the trigger set exactly the way I like. I am so familiar with the way this rifle shoots that I thought I’d have no trouble shooting better groups with it. But the first group of JSBs went into 0.768.” That’s larger than the first B40 group. So I settled down and shot a second group – also 0.768.” Then, I shot the other pellets, just to make sure the JSBs were still the most accurate, and of course they were. A final group of JSBs went into, you guessed it, 0.768.” Now, I’m sure these groups do vary by several thousandths, but it’s just too difficult to see where those tiny pellet holes begin when you shoot domed pellets. Still, there is a very large difference between six-tenths of an inch and almost eight-tenths. You can see it with your eyes – no calipers required. 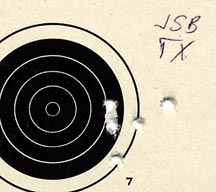 The BAM B40 wins!
In this test on this particular day, the B40 out-shot my TX 200. It was a hands-down clear victory. Yes, the day was less than perfect, but both rifles had to endure it, so the test was fair. On a different day, the results might be different, but I don’t think the B40 needs any apologies – it is a very accurate air rifle.

Comparing to some others we know
To put this into perspective for you, on the same day a Gamo CF-X might have produced 1.25″ groups under the same conditions. A Beeman R1 would have been the same or perhaps a little better. The RWS Diana 48 might have shot a one-inch group. The TX is really the best air rifle I have seen, until now, so this B40 is remarkably accurate. At least the one I tested is.

Can they keep the quality consistent?
One thing that has plagued Chinese manufacturers is quality control. They cannot keep a consistent level of goods flowing from the factory in most industries. The optics industry is one notable exception, and there is, no doubt, a lot of foreign oversight behind that. Chinese airguns are at the other end of the quality spectrum, and that fact should keep potential buyers wary for a long time to come. BAM seems to have produced an exceptional rifle in the B40, and if they can maintain the level seen in this single rifle, then it’s time for England and Germany to become concerned.

The .22 is next
Pyramyd Air also made a .22 caliber B40 available for testing, so that will be next. I plan to look at it just as critically as this rifle, and I hope it passes muster! 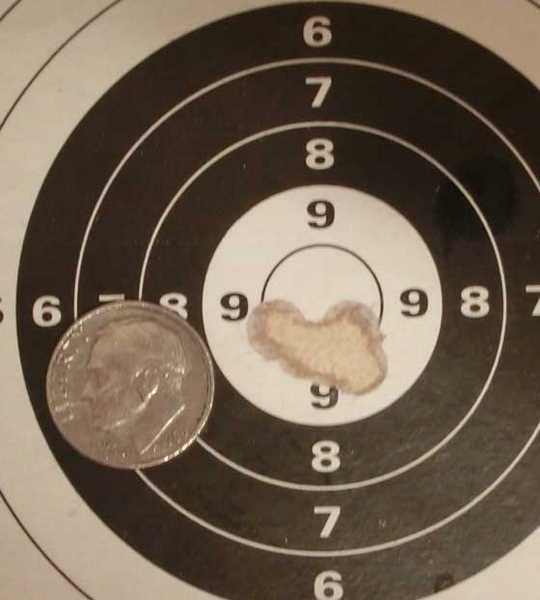