Have you looked at the Christmas Gift Guide on Pyramyd’s website, yet? It’s a great place for friends and relatives to find the things you really want.

Okay, today we return to the the Gamo Viper Express air shotgun. I went to Gamo’s US website to see what they have to say, but there is very little technical info there. They do say this gun is for hunting small game and birds (which are small game) at close to medium distances. I disagree. Maybe you could take a roosting sparrow at 20 feet, but to push the envelope out farther or to go after larger animals would be unsportsmanlike, in my opinion. And, PLEASE, let’s hear no tales of scaring off domestic pets with it!

Velocity
I checked the shotshell velocity again and found that it had increased to 598-601. That’s better and more in line with what I would expect. The shot charge weighs 15.3 grains, so now we are up to about 12.2 foot-pounds. However, you cannot use that energy to calculate the effectiveness of this gun on game. Because it is a shotgun, only the shot that actually hits your quarry transfers energy, so we first need to establish what the pattern looks like.

Pattern
I used a white sheet of paper placed at 10 yards on a stout cardboard box. The box had both two- and four-fold thicknesses that enabled evaluation of penetration. The first shot was quite revealing, as the photos show. 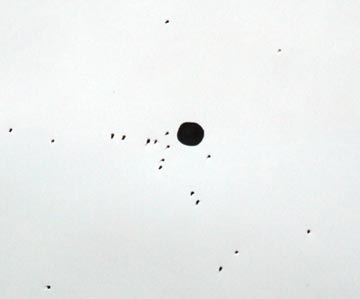 This pattern was obtained at 10 yards. The black circle was the aim point. Notice the large areas devoid of any hits. In shotgunning parlance, this is what’s known as a “blown” pattern.

Nineteen holes show, but I think two shot went through the same hole somewhere. Notice the large areas in which there are no holes. This is a poor pattern that shotgunners would call a “blown” pattern, meaning the voids (areas where there’s no shot) in it. 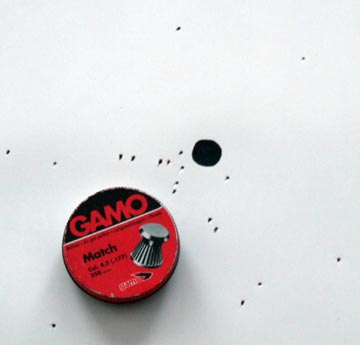 The tin of pellets gives some scale to the pattern and the holes in it. You can see other spots just as large that also received no shot.

The first pattern is rather tight at the center, so I shot a second one to confirm or dispel this trait. If you could count on the shot holding together this tight at 10 yards, the gun might be able to take pigeons and squirrels reliably. 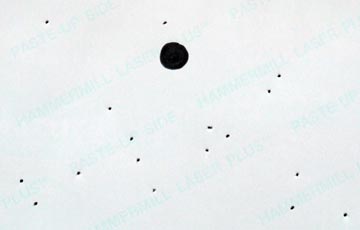 This second pattern is more evenly distributed, however it also has some voids. The pattern should be round, but 20 shot aren’t enough to give a distribution like that.

Penetration
On shot No. 1, 14 of the 20 shot made it through both sides of the box. Six of those passed clear through four thicknesses of box, because of some reinforcements they had to pass through. That’s very good 10-yard performance for No. 9 shot that starts out going only 600 f.p.s.

Hunting – yes or no?
A resounding NO! Too few shot make a blown pattern that has limited effectiveness on game…even at close range. This is always a problem for air shotguns, and especially for this one, which is the midget of all of them. Hunting game with this gun would be cruel.

HOWEVER…
There are other things to shoot. Like insects, for instance. How I would love to go after carpenter bees with a Viper Express. What about that nest of yellowjackets in your backyard when the climate gets very dry? The shots would have to be taken closer than 10 yards, which would add a sporting side to the challenge.

We still need a good way to reload the empty shells, so there’s going to be at least one more report on this gun.