Before we begin, I noticed that there are some pellet packages in the Pyramyd Air Gift Guide now. If you have someone who wants to give you a nice gift but doesn’t know much about airguns, these are great selections. Plus, they’re giving the 4th tin free in the promotion! Better hurry, though, because the best pellets will probably sell out as the season progresses.

We’re back on the RWS Diana 54 today, but if you are concerned that this rifle or the Whiscombe are going to hog this blog, don’t be. I will take plenty of breaks and do other airguns. I’ll need the time, because some of my future reports require trips to the range. Let’s look at several details I glossed over in the first report.

Cocking
I told you this is an easy rifle to cock, but now I’ll tell you why. The sidelever is arranged to provide superior leverage, and this is true for the Diana models 48 and 52, as well. It’s true the sidelever does add some weight to an already heavy airgun, but the cocking advantage makes it worthwhile in my opinion. 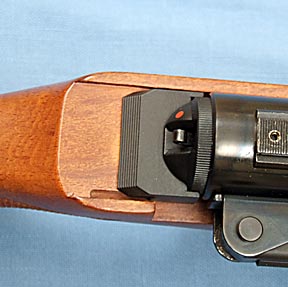 The action slides forward and locks up until the gun fires. When the piston springs forward, that pushes the action to the rear. The harsh impulse of the piston coming to a halt stops the action in its tracks, which removes every sense of recoil from the shooter. 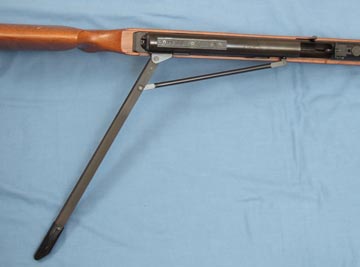 The sidelever swings far to the rear, so the mechanical advantage is great. The strange thing about this picture is the fact that the rifle was not cocked! As I tell you in this report, the ratchet was holding the sliding chamber. The lever still goes back another 20 degrees. 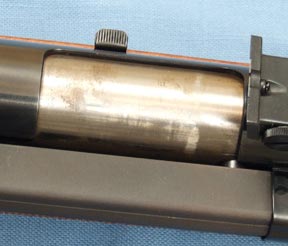 The silver cylinder is the sliding compression chamber.

On the left side of the stock there’s a button sticking up. It’s the release button for the ratchet, so you can slide the chamber forward once the rifle is loaded. If the button is ever difficult to push, back off, because the rifle is not cocked! The ratchet is holding the chamber, instead. Keep your hands off this button while you load the rifle! That actually happened to me while shooting the pictures for this report! 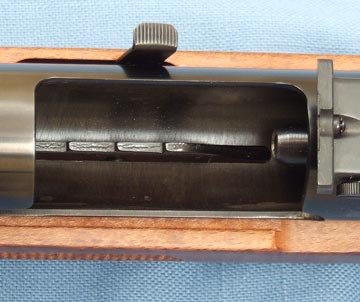 Here you can see the breech, which is very accessible for loading. The steel ratchet is seen at the bottom of the cylinder and the button standing proud of the receiver is the ratchet release. This one was holding the sliding chamber at the time, though I didn’t know it when I took the picture!

Next time, I’ll mount a scope and head to the range!