The rifle
The 99 is a large underlever rifle. It weighs about 8 lbs. and is 44.75″ long. The pull is a generous 14.5″. The stock is reddish-brown hardwood with tight grain but without much figure. It has a low cheekpiece on the left side and the top of the comb is contoured in the Monte Carlo style. The metal parts are all an even dark blue. There are a few plastic parts, such as the end cap and triggerguard, but the bulk of the action is wood. The fit of the black rubber recoil pad and white line spacer is crude and uneven, but the rest of the wood fit is pretty good. The stock on the rifle I’ve got has one spot filled in with wood putty, which is almost a hallmark of Chinese wood stocks.

Unlike the majority of Chinese airguns, the TF99 is a copy of nothing. It is, rather, an enlargement of the TF97, which is an improved version of the QB36 underlever.

Loading and cocking
To load the rifle, pull down the underlever as far back as it will go. That retracts a silver-colored sliding compression chamber and reveals the breech of the barrel. The pellet is inserted directly into the breech, and the underlever is returned to the stored position, which closes the sliding chamber. You have to unlock the anti-beartrap mechanism or the underlever won’t move. The lock is a lever located just behind the trigger. Pull back and the underlever is released. You get used to this after a few shots. 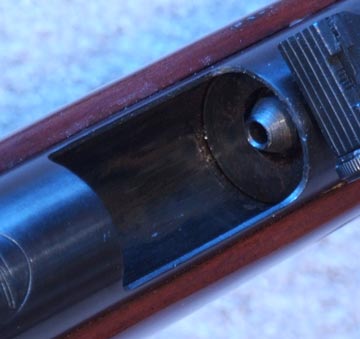 With the sliding chamber withdrawn, the breech is exposed for loading. 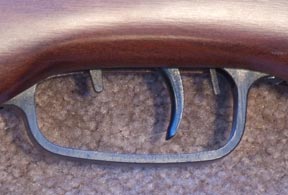 Three levers inside the triggerguard can be confusing. The one in the rear (the right in this shot) is the anti-beartrap release for returning the underlever to the stored position. The trigger is the long one in the center. The automatic safety is in front (left) and must be pulled back before the gun will fire.

Velocity
The rifle cocks with about 28 lbs. of effort, which seems light for a rifle that shoots 1,100 f.p.s., but the one I tested did not achieve that velocity. With 7.0-grain RWS Hobby pellets, it averaged 890 f.p.s.; with Gamo Match pellets that weigh 7.5 grains, it averaged 801 f.p.s. With 10.6-grain Beeman Kodiaks that are among the most accurate, the rifle averaged 629 f.p.s.

Trigger-pull and firing behavior
The trigger pull is quite light. It’s a long second stage but not over 2.5 lbs. of pull weight. There’s a lot of low-level creep in stage two, but this trigger does break-in over time. After 1,000 shots, you should start to notice a smoother pull. Firing behavior is very smooth, with practically no vibration or recoil.

Accuracy
Accuracy is on the order of 0.30″ to 0.50″ at 10 yards when the best pellets are used. The rifle is very sensitive to how it’s held and demands a light hold on the palm of the hand. Resting it on sandbags destroys accuracy.

You have to compare this rifle to others in its price range. It currently sells for $170, though there are often sales throughout the year. That positions it against Gamo CF-X, which sells for $200. While that is $30 more, you get more power and a lot more accuracy with the Gamo. What you get with the TF99 is the .22-caliber option that many hunters will want. So there is a place for it. 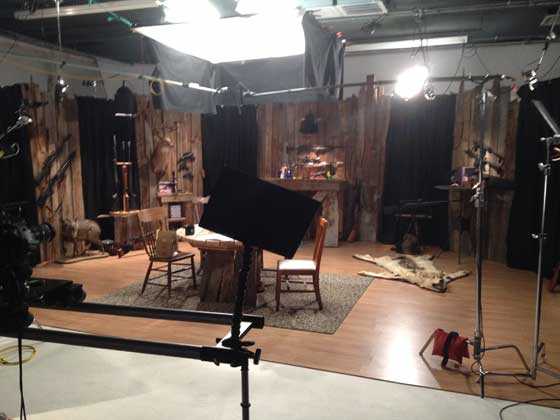