Okay, yesterday’s post did not explain the physical changes that take place during the break-in of a spring piston airgun, so today I will finish the report. I assumed that all readers had followed the 13-part spring gun tuning series I finished back in August of 2006 and would be able to match the results of the break-in period with the things we did in that series. Some of you did, no doubt, but I keep forgetting that we get new readers every week, and many of them haven’t had the time to read all the blogs we have done since we began in March of 2005.

Today I will explain what happens to the physical parts of the gun. You more experienced readers can keep me straight by adding your comments.

Spring-piston technology
A spring-piston airgun is a purely mechanical machine – perhaps among the few remaining in production. It has no microprocessors and requires no electronic test system to keep it running. It works on purely mechanical energy (excluding the one Rutten rifle that’s cocked by a motor), with mechanical parts working together to produce a propulsive force.

As a society, we have forgotten what mechanical devices are like. We forget that an automobile used to have to be broken in after purchase with a process of slow driving followed by short sprints. Only after thousands of miles were on the odometer was the car loosened up enough to drive normally. There are many other examples, like leather cowboy boots, but you get the idea.

A spring piston airgun comes to you from the manufacturer full of burrs and sharp edges. Each manufacturer has different levels of finishing before the gun leaves the plant, which was the point I tried to make about the differences between guns and their break-in periods. Weihrauch rifles, for example, tend to have more burrs and sharp edges than Air Arms rifles. On the other hand, the Weihrauch HW45 spring-piston pistol (Beeman P1) comes from the factory in a very polished and ready-to-go state.

Wear-in
As the powerplant parts slide through their cycle time after time, the burrs and sharp edges wear off. You can see this when you disassemble an airgun with a few thousand shots on it. There will be shiny spots where metal-to-metal friction has worn the parts smooth. As the burrs wear down, the parts slide with less friction, which is where the cocking effort reduction comes from. It’s probably also where part of the velocity increase in the TX200 Mk III came from, but that begs a question. Why didn’t the Beeman R1 increase in velocity after the break-in? That’s because of one of those difference I talked about.

Seals can wear-in, too!
The R1 piston seal is a parachute design, the same as the TX200. But the thickness of the lip is different, as is the material from which the two seals are made. The Weihrauch seal does just about all it’s ever going to do right out of the box. The TX200 seal likes to be worn-in. It isn’t made of steel, but even a synthetic part can experience a wear-in.

The proof of the Weihrauch seal being maxed is that you can replace it with a different type of seal and get different performance from the gun using all the same parts. The old blue Beeman Laser seal, for example, had to be sized to fit the cylinder of the R1. Until is was, you couldn’t get it in. Do a good job and you got an increase of 200 f.p.s. in .177 using a lighter-weight mainspring. So the rifle cocked easier and gave 200 f.p.s. more velocity. However, if you didn’t size the laser seal correctly, the gain was marginal, if any at all. So that seal really had to fit the cylinder tight to work. 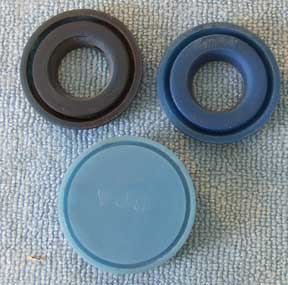 The Diana 48 seal on the left has been fired between 1,000 and 5,000 times. The pretty blue seal on the right is new. The dark seal is as close to new as you can get, except for the color from the lubricant is has absorbed. Larger seal on the bottom is a new unfitted R1 Laser seal. 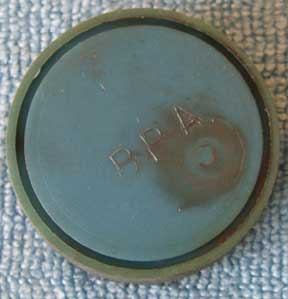 This R1 Laser seal was in a rifle for over 2,000 shots. Except for discoloration from lube, it shows no wear. 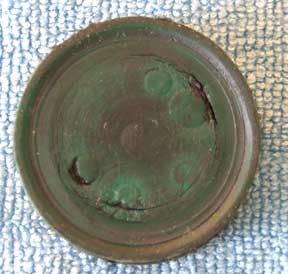 This experimental R1 seal was damaged because it didn’t generate a high-pressure air cushion to retard its forward movement. It slammed into the end of the transfer port repeatedly for hundreds of shots. At the chronograph, the velocites were slower than expected. Firing was harsh. I show this to point out that airgun parts are not produced by guessing or chance. If they aren’t right, they don’t wear in – they wear out!

Triggers
Yesterday I mentioned that BSF airguns were overbuilt, but I didn’t explain what I meant. Let’s look at their triggers. The lever portions of the BSF triggers were made of numerous plates that were riveted together to act as a single solid piece of steel. Those joints where the plates were cut were rough. A new BSF gun had a horrible long hard trigger pull. But after 4,000 shots, the pull smoothed out (from metal wear) to a beautiful clean letoff. Older Gamo rifles were the same way, though not for the same reason. All their parts were punched and formed from thin sheetmetal and they were loaded with sharp edges and burrs. Horrible triggers at first, but after 3-4000 shots, not too bad.

But did you happen to notice that the two R1s Gaylord tested had slightly different velocity numbers with the same pellet? That drives some owners wild. They think their guns should all have identical performance because they are all made from identical parts. The truth is, those parts ARE NOT identical in any way. The miniscule differences caused by finishing and interaction with other slightly different parts makes each airgun unique. I think it’s wonder they are all as close as they are, given the influences of such small variations.

Now I need you readers to tell me if this was a satisfactory explanation, taking what I wrote yesterday into account. Remember, I am answering Scott298’s question about what happens during the break-in of a spring piston airgun. 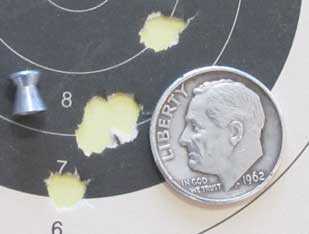