I’ve had something come up and have to go out of town for a couple days, so I won’t be able to answer any questions until Friday. Plerase help out while I’m out of the loop.

The UTG M4 is an automatic electric gun (AEG), so the 8.4-volt battery has to be charged. That takes 16 hours the first time. After that, it takes about 4 hours.

The battery stores in the butt, balancing the rifle well. With the oversized handguard and the rifle’s general stoutness, this gun feels big!

I started with 0.20-gram BBs, even though I thought they were too light for the powerplant. Sure enough, at 10 yards they gave groups in the 2.5″ range. That’s not what you want in a battle rifle – not even a CQB gun. But I knew 0.25-gram BBs would make things better, and they did. I used TSD Competition Grade AEB BBs that I had laying around. As you can see, they worked quite well. 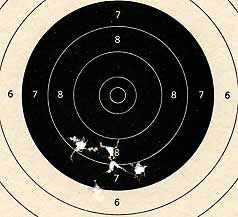 TSD 0.25-gram BBs did the trick! I was using a 6 o’clock hold, so they went just above the aim point.

Great open sights!
All shooting was done with the peep sight supplied with the gun. It works the same as an M4 firearm peep, and the front sight does, as well. Both front and rear sights have elevation adjustments, and the rear has windage, too. The top of the receiver is a Picatinny rail, so you can use optics if you like, but I wanted to see how good these iron sights were. They’re great! 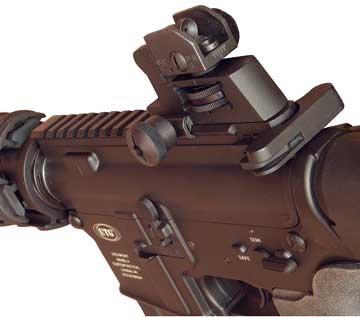 The rear sight is quite a piece of machinery! It’s just like a firearm sight, because it was MADE for firearms!

Velocity
Next I tested velocity. I tested 0.12-gram BBs, though you’ll never use them, because all the other AEGs report velocity with them. It’s just for comparison.

Naturally you’re only going to shoot the most accurate BBs, which are 0.25 grams. Remember that all BBs are not made the same, so do some comparison testing before settling on a brand. Don’t just buy on price.

Let me get my thoughts together, and there might be one more part to this report. If not – please remember the most important thing. This airsoft gun is built right here in the U.S.A.!

Tom Gaylord, gunfighter
In college in the 1960s, Tom worked at Frontier Village in San Jose, California. He was a ride operator and a gunfighter. Some of you have asked us to post a picture, so here is one taken around 1968. Tom was the Deputy Marshal shooting it out with the outlaw, Dakota, who is Randy Mitchell (not the airgun hunter, though they do know each other). 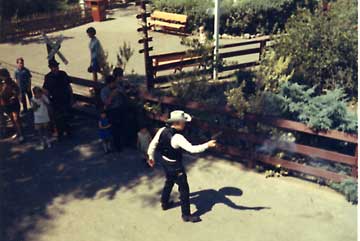