Continuing our look at the Beretta PX4 Storm, let’s examine functioning and then shoot it for velocity. I’ll also record the number of available shots per 12-gram CO2 cartridge, because there’s a lot of interest in that number.

Trigger
The trigger is both single- and double-action and is a bit strange in the single-action mode (when the hammer is cocked). The first stage is there and light as it should be, but the second stage divides into two distinct parts. The first part is a pull that stops at a definite point, and the second part is the letoff. If you’re familiar with old (pre-1930) Colt double-action revolvers, you’ll know they “stack” toward the end of the double-action pull…meaning they come to a definite pause in the pull as the effort to release the sear increases. You can use this stacking to control the release of the hammer if you’re careful. The single-action trigger on the PX4 Storm feels remarkably similar to those old Colt double-actions. I suspect it has to do with advancing the 8-shot clip to the next chamber. It releases in the single-action mode at 4 lbs., 12 ozs.

Two types of shooting
I tried the gun two different ways in an attempt to learn how to get the maximum number of shots from a CO2 cartridge. The first method was to pause 30 seconds between shots to let the pistol recover from the cooling effect of the CO2. Using that method, I got 5 full magazines and half of a 6th, which amounts to 40 shots on a cartridge. At the end, the power was definitely falling, meaning that all liquid CO2 had evaporated and the gun was shooting on gas, alone. I dry-fired a few more shots; within four more shots, the slide was not cocking the hammer.

Gamo Match pellets ranged in velocity from 226 f.p.s. to 356 f.p.s., but the 226 was an anomalous shot. All other shots were above 332 f.p.s. The average for this pellet with a fresh CO2 cartridge (and excluding the lowest shot) was in the low 340s. Gamo Match were also the final pellets I shot under this technique, and the final string went from 292 to 360. The average was about 350, 10 f.p.s. faster than the first string, which proves that CO2 acts as a pressure regulator, as long as there is liquid CO2 remaining. The final shot at 292 f.p.s. was the result of the liquid being gone.

Crosman Silver Eagle lead-free wadcutters averaged 410 f.p.s. Of course, they’re 2.3 grains lighter than the Gamos and H&Ns, so an increase is to be expected.

I also shot H&N Finale Match pellets on this CO2 cartridge. They weigh almost the same as Gamo Match pellets and produced an average velocity of 337 f.p.s.

When the cartridge ran out, I swapped it for another and started shooting with a string of Crosman Copperhead BBs. They’re made of steel and are 2.4 grains lighter than the lead pellets I shot, but they averaged only 370 f.p.s. They’re quite a bit smaller in diameter than the pellets and therefore allow some gas to blow past the BB in the barrel. They’re held in the magazine by a magnet in the center of the revolving clip. 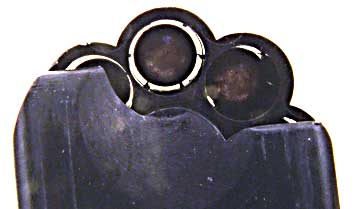 Steel BBs leave a lot of room in each chamber. The BB is held in by a magnet. Those ribs in the chamber are there to hold the pellets.

Fast shooting
This time, I shot as fast as the Chrony could register, which is about a shot every 1.5 seconds. The strings went down in velocity from the first shot to the last, as you might expect. For example, the first shot with Gamo Match went 360 f.p.s., while the 8th shot with the same pellet went only 328. Gamo Match went from a first-shot high of 334 to a last-shot low of 290. However, shooting this way did improve the total number of shots I got from the pistol, from 40 to 48. On the final string, I waited 30 seconds between shots and the average for Gamo Match was 318 f.p.s. So, if you want more total shots per cartridge, shoot the pistol rapidly. The temperature on my office range was 70 degrees F throughout the test.

Impressions
I didn’t know what to think before starting this test. I’ve read reviews both praising and condemning the PX4, so I was ready for anything. I like the trigger and the way the gun feels in the hand. It’s on the large side for me, so shooters with big hands are going to enjoy it. Next, we’ll see how it does on paper.

Why do pellet weights vary?

How and when PA got started – Part 4