Let’s look at the accuracy of the .22 caliber Gamo CF-X with Air Venturi Ram Air gas spring installed. You’ll remember that I commented about the soft aluminum scope rail that Gamo now mounts on its rifles. It cannot take the recoil, and you’ll gouge the soft aluminum if you anchor a scope mount with a steel pin. So, I removed the rail and mounted the scope rings directly to the steel receiver.

The aluminum scope rail on the CF-X came off.

Three Allen screws hold the rail to the gun, but the large screw at the back of the rail is actually a steel stop pin screw that fits into the rifle’s steel receiver. It has to come out also, and the plastic end cap must come off the rifle, so the action has to be separated from the stock. 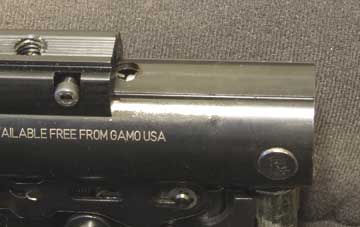 The plastic end cap comes off, and the scope rail slides off the back. 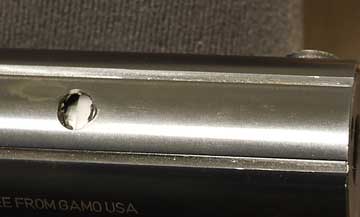 With the aluminum rail off, the Gamo steel receiver has a nice hole for a scope stop pin.

Once the aluminum rail is off the gun, there’s a hole for a scope stop pin in perfect position for any scope mounts you use. The aluminum rail used this hole already, so it’s clearly intended for that purpose.

Scope
I mounted a Leapers 30mm 3-12x mini SWAT scope that is so short that it cleared the rotary breech by several inches. If you have a short neck this scope may not have enough eye relief, and you’ll want a standard-length scope. Once the receiver was free of the aluminum scope rail, mounting took less than a minute, because the scope was already in rings from other tests.

Sight-in
Sight-in was a breeze because it took exactly one shot. The pellet was in perfect alignment and only required more elevation to hit the point of aim. I shot .22-caliber Crosman Premiers that did well in the velocity testing, but I’ve also had good reports from many satisfied customers. I did try 15.8-grain JSB Exacts, as well, but they didn’t group as tight as the Premiers.

This rifle demanded that I relax completely to group well. I tried several locations for my off hand but the best was just behind the cocking slot in the forearm. There, the rifle was balanced perfectly and shot its best. 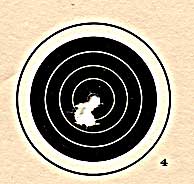 Summary
So, what have we learned with this test? First, that the Gamo CF-X is probably best-suited to .177 caliber instead of .22. Diana 48/52 rifles had a problem when they bumped the caliber up to .25 caliber, too. The rifles didn’t shoot as hard in .25 as they did in .22. Maybe we’ve run into that here.

Second, we discovered that the aluminum scope rail cannot stand up to a steel recoil stop pin. Remove it and mount the scope rings directly to the rifle and everything will be fine.

Finally, we learned that the CF-X is a good shooter in .22 caliber, just as it is in .177. Forgetting the lower-than-expected power, the rifle is dead-calm and quite accurate, as you can see.

This was our third look at rifles with Air Venturi gas springs, and I like them more each time we check one out. I’ll be going through the Gamo, Crosman and Remington guns this year and checking out several others with the Air Venturi gas spring. It’s a great way to get a fine, smooth tune.

Piston bounce: When is a pellet “JUST RIGHT”? – Part 2

Beeman Pell Seat – does it work?