Today, we’ll look at the accuracy of the Beretta PX4 Storm. This has been an interesting review from the standpoint of all the comments I’ve seen. One reader said he was surprised that the velocity was so low (450+ f.p.s. in his gun with Silver Eagle hollowpoints) because the blowback made it feel more powerful. I never thought of that, but perhaps that is the big draw for blowback action – the power it conveys to the shooter.

Start close!
Because I had no idea of the potential accuracy, I started shooting at 12 feet. I normally reserve such close distances for BB guns, but with repeaters that have blowback I know the accuracy will probably not be great. Starting close keeps everything safe. Naturally, I wear shooting glasses; because this gun shoots Crosman Copperhead BBs as well, I used a Quiet Pellet Trap.

Gamo Match
One of the PX4 customer reviews mentioned success with Gamo Match pellets, so those were the first ones I tried. The first group looks great until you realize it was shot from just 12 feet. I’d normally group like this at 33 feet (10 meters) with a really accurate Umarex pistol such as the Colt M1911A1 or the S&W 586 revolver, so this isn’t as good as it looks. Yes, the PX4 Storm is also made by Umarex, and I wanted to say the blowback was the problem until I remembered that the Desert Eagle also has blowback and is very accurate. Something else is at work in this case. 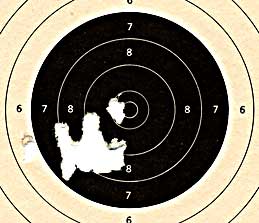 This looks good until you realize it was shot from 12 feet. Eight Gamo Match pellets.

BBs were next
For BBs I stepped up to just 10 feet, because they can really spray wildly. You can see from the resulting group that they aren’t as accurate as pellets, but they’re not that bad, either. Certainly they’re minute-of-pop-can at 20 feet. However, as I was going to back up to 25 feet and BBs were already drifting to the left, I stopped testing them here. 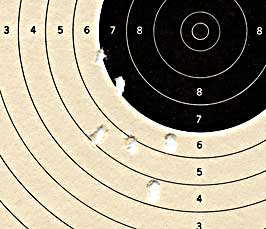 Crosman Copperhead BBs opened up at just 10 feet! They’ll tag a soda can at 20 feet but you’ll have to aim to the right. There were only 7 BBs, due to one falling out of the magazine just before loading.

Other pellets
I also tried RWS Hobbys, Crosman Silver Eagle wadcutters and H&N Finale Match to see if there’s a difference. If there is, I couldn’t see it. In fact, the Hobbys seemed to perform just as well as the Gamo Match. The H&Ns were slightly less accurate, though I didn’t shoot them enough to confirm that. Because they cost more, I figured why bother with them in an action pistol?

25 feet
I shot from a strong side barricade position, which means I rested my right hand against a door jamb and used my left hand to steady the pistol. I used a strong spotlight on the target, so the sight picture would be clean for me, and I disregarded the three white dots on the sights. However, I still had my bifocals on and they were causing some double images of the front sight blade. That’s never good. The groups that resulted were in the 3″ range, though curiously centered in the bullseye. The better sight picture did away with the gun shooting to the left. 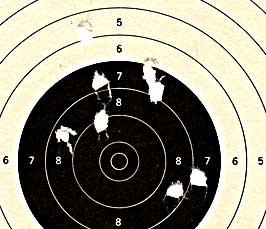 Shooting from a strong side barricade at 25 feet, 8 Gamo Match pellets opened up like this.

Glasses off!
Finally, I took off my glasses so the sight picture would not look double. That gave me the best results from 25 feet, though the shots moved to the left again. All shooting was done using a 6 o’clock hold. 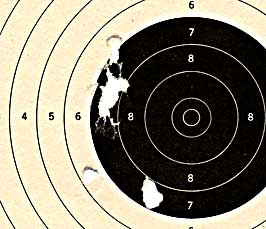 Glasses off made the front sight sharper, but this is still the best I could do.

So what?
The PX4 Storm isn’t for target shooting, so why am I shooting it that way? Because you can’t accompany me as I plink at pop cans and balloons. I have to have something to show you and targets are a good medium ground. Shooters who buy the PX4 Storm are not looking for one-hand target accuracy, they’re seeking a fast-action pistol that can keep up with their shooting fun. I believe this pistol can do it.

What about jams?
There have been some reports of jams with this gun. I bet I know how they happened, too. After shot number 32 (or 40, if you followed my earlier report) the shooter kept on shooting even though the gun sounded weaker and weaker. That’s a typical error for a new shooter with an action CO2 pistol. It happens with green gas airsoft guns as well. I think if you pay attention to the number of shots fired and to the sound of the gun, you can avoid any jams. I certainly had none in over 300 shots.

They have the wrong twist rate!: Part 1 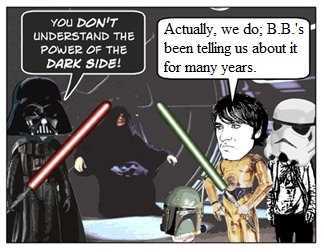 What is “lock time”?