Okay, all you 10-meter-philes, wake up, because today will be special! First, though, I have to remark that the survey on the Pyramyd Air home page is indicating that most airgunners like to hunt. Ten-meter shooting is coming in much lower. I told them I thought people might be interested in a lot of things and not consider themselves to be 10-meter shooters, but they may still have an interest in the guns. I drive a pick-up truck and live in Texas, but I’m not a cowboy. Okay, let’s get to it.

Used guns to be concerned about & why
Gamo/Daisy 126 – Needs frequent rebuilding. I would avoid it altogether.

All FWB spring guns, including Daisy models – Their early piston seal formula deteriorated over time. If you buy a 150 or 300 target rifle, be aware that it may need a costly resealing ($150 and up). Same for a 124, but the cost to rebuild is under $100. The new seals last much longer in all models.

Walther LG 55 and LGV – Same seal problem as FWB. The fix is easier and cheaper because these are simpler actions. Finding the new seals is harder.

Diana model 60/65/66/75 recoilless rifles (model 75 also briefly sold by Beeman as model 400) – Same seal problem as FWB and Walther. Costly to fix, but Umarex USA can do the work. Giss counter-recoilling piston has to be timed with the power piston so this is definitely not a DIY job! 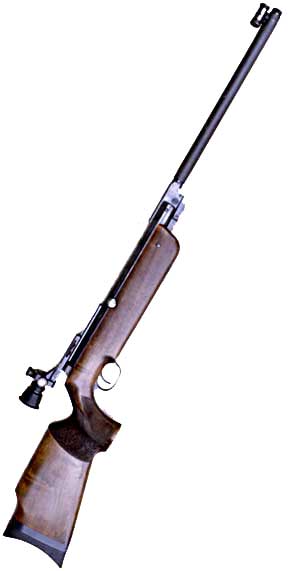 Diana model 65 was an early breakbarrel recoilless target rifle based on the Giss system. You can spot a Giss system by the round cap over the trunnion that connects the two pistons (silver circle above stock). There is one on each side of the spring tube.
Anschutz 250 – Has an oil recoil damper that invariably leaks over time. Parts are nonexistent, but a clever airgunsmith can sometimes repair it. Also, this model is EXTREMELY prone to developing a crack in the near-vertical pistol grip. Of nine rifles I’ve examined, seven were cracked at the pistol grip along the line of the wood grain.

What works?
Those problems will not be found on every one of these guns. Many of the FWB 150/300s have now been rebuilt with modern seals that will last a long time. Same for the 124 that I just threw in for good measure. Same for about three-quarters of the Diana guns, but more of them will need seals than the FWBs.

These older guns now sell for $450-750, depending on their condition and the accessories that come with them. Their triggers are very good compared to a sporter trigger, but they are nowhere near the triggers on guns of later make. They usually lack overtravel stops, and nearly all lack a dry-fire capability.

Guns you never hear of
The Haenel 311 bolt-action target rifle is in the informal class, but the sidelever model 312 is much nicer and more like a real target rifle. The Haenel model 50 (I believe) is the same as a Hammerli overlever single-stroke rifle that’s quirky but accurate enough for informal target shooting. The Mauser 300 was made by Hammerli, I believe. Another good informal target rifle.

As you get into the 1980s guns, CO2 comes into use and many of these guns are still competing regionally. No brands have outstanding problems, but you probably don’t want to shoot a Crosman 84, because it’s so rare. The factory says only about 100 were ever made, so I’d keep it as a collectible rather than a shooter.

In the 1990s, compressed air began replacing CO2 as the power of choice. But CO2 guns continued to be made during this period, so they advanced at the same rate as the pneumatics.

Go for the gold!
The beauty of a 1980s and 1990s target rifle is that they’re just as accurate as the guns of today. What they lack are the ergonomics, but that’s about all. The prices for these guns run in the $500-700 range. You’ll occasionally see someone asking $1,000, but not many will sell at that price. This is where you can buy a top-quality 10-meter gun for very little. The brands to look for are Feinwerkbau, Walther, Anschutz and Steyr.

Not obsolete yet, but give it another year or two and this FWB P70 will be a gun to watch for.
A tip
Precharged rifle removable air tanks have a service life of 20 years. Some guns will be sold because the service life is running out on the tanks. They cannot be rebuilt or serviced in any way – you’re supposed to just throw them out. If I were looking for a good deal, I wouldn’t worry about the remaining service life – as long as the seller is worrying. Only the owner will ever charge these tanks, so it’s up to you whether you discard the tanks or not at the recommended time. They are way under the size of tanks that have to be hydrostatted, and they never go empty unless they had to be shipped, so they have much less work-hardening. You can probably buy new tanks for almost any PCP gun on the market. Features may change on the gun over the years, but fundamental specifications such as tank fittings seldom change.


Don’t overlook single-strokes!
I haven’t mentioned single-strokes yet, but all of them are in the “good” category except for the Gamo 126. Starting with the Walther LGR, which tenaciously holds its price, all the way down to the FWB 602, a used single-stroke can be a wonderful way to break into 10-meter rifles. The LGR is a little hard to pump, but the designs get easier with each passing model, and the most recent ones take less than 20 lbs. of effort. Single-strokes seem to hold their prices better than CO2 or even PCP guns – maybe because you can travel with them. Expect to pay $700-900 for a good one. I’ve even seen asking prices as high as $1,400. 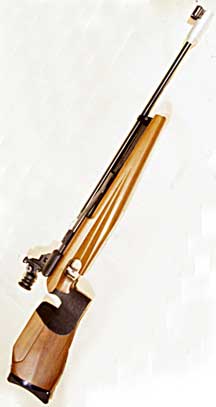 FWB 601 single-stroke is obsolete but remains a wonderful target rifle. It could still win gold! 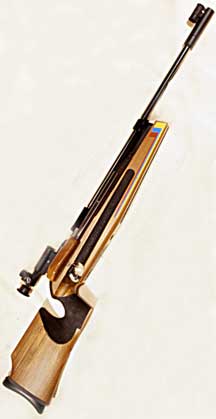 I think this is an old Steyr single-stroke, but it could be a Walther. Either way, it’s a great target rifle that won’t cost you much money.
What about running bore/running target guns?
These rifles were not made for 10-meter competition. They were made to shoot moving targets and to be swung as they are aimed and shot. They don’t make good substitutes, even if you can get them with the correct sights. Since they were made to be scoped, they’re not something to buy unless that’s what you want.