Who’s your pal? Pyramyd Air has just uncovered a very small number of new-old-stock Norica Young breakbarrel spring rifles from the 1990s. These were left after an airgun dealer went out of business and they’ve been sitting around for years. While they are brand new, a few may have some age discoloration and handling marks. 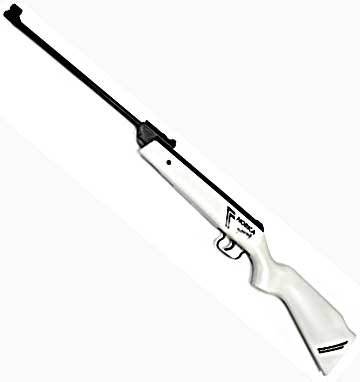 The Norica breakbarrels come in several different colors (color choice not possible because of short supply).

The Norica Young is a youth model breakbarrel with a colorful painted wood stock. Norica is the quality Spanish airgun maker that made several models for Beeman. I imagine this .177 rifle will produce velocities in the low to mid 600 f.p.s. The gun has no safety and the non-adjustable trigger is very heavy for safety. The price for this time capsule air rifle will be only $75. Quantities are very limited, so act as soon as I alert you they are live. Don’t call before because until it’s live on the website, there’s nothing to sell.

Field target course in jeopardy
Things aren’t looking good for a field target course in 2008. So far, only Wayne has said he’ll attend. We’re issuing a press release to locate more students. If we don’t have any more takers before the end of the month, we’ll have to postpone this course until the summer of 2009. We understand that we gave you very short notice this year, and if it doesn’t work out – so be it. We’ll sure get a head start on a 2009 course!

Here comes the Diana scope base
Tomorrow, I will start a report on the new Leapers scope base for Diana air rifles. They’ll be available in about a month. I’ll explain in detail what this new base has going for it.

Now, let’s get back to Ruger’s Air Hawk Elite and test for velocity. The rifle had a few shots before this testing took place. The first one was a powerful detonation, but not a sound after that. The rifle is rated to 1,000 f.p.s. I shot a few dozen times before recording these velocities, just to get any excess oil out of the compression chamber.

RWS Hobbys
RWS Hobbys (7.0 grains) used to be the lightweight pellet of choice. Unless the manufacturer had some compelling reason, like they made their own pellets, they used Hobbys for velocity tests. And, every airgun writer used them for the same reason. In the test rifle, Hobbys averaged 920 f.p.s., with a range from 912 to 930. That’s 18 f.p.s., which is considered pretty tight for a spring rifle. The average muzzle energy is 13.16 foot-pounds.

Crosman Premier 7.9-grain pellets
The Crosman Premier 7.9-grain pellet is another test standard. For .177 spring rifles you use the 7.9-grain weight unless the gun’s power dictates otherwise. This one did not. The average was 815 f.p.s., with a spread from 791 to 833. That’s surprisingly slow and also a larger velocity spread than I expected from this pellet. Muzzle energy averages 11.65, which you can see is a large drop from the Hobbys.

Gamo Raptors
Every dog has its day, and this time the Gamo Raptor (5.4 grains) surprised me completely. Not only were they surprisingly fast at an average 1072 f.p.s., they also had a relatively tight velocity spread from 1059 to 1081. The muzzle energy was the highest, at 13.78 foot-pounds. The first time Raptors have lead in any test I’ve conducted. They earned a place in the velocity test with this performance. Wouldn’t it be fun if they were accurate, too?

Pellet choices
We have a rifle in the sub-14 foot-pound category that performs well with lighter pellets. Popular wisdom says it won’t do as well with heavyweights. Just so we’ll all know for sure, I also tested the rifle with Beeman Kodiaks. Before I get to that test, though, let me explain why I say this. A spring rifle operates on a balancing act of spring strength, piston weight and the length of the piston’s stroke. If the rifle does well with light pellets, it means the piston is probably too light to also do well with a heavier piston. Tuners can actually adjust the gun to a certain pellet by adding weight to the piston until performance peaks. But let’s see how this works in practice.

Beeman Kodiaks (10.6 grains)
Beeman Kodiaks (10.6 grains) also astonished me. I expected a velocity around 690-710, but the rifle averaged 747 f.p.s. What’s more surprising is the tight velocity spread from 743 to 751. The average muzzle energy was 13.14 foot-pounds, only a little behind the Hobbys. Conventional spring gun tuning wisdom suggests this isn’t possible – that a rifle be good on both ends of the pellet weight spectrum. So much for conventional wisdom. Clearly, this powerplant loves both Raptors and Kodiaks.

So, the gun is right on the money as far as power is concerned. I think Ruger may be on to a good thing with this rifle. Accuracy testing comes next.

Piston bounce: When is a pellet “JUST RIGHT”? – Part 2