There is a new Airgun Reporter video report on the Hammerli Pneuma. See it here.

Okay, now the teaser I promised you in yesterday’s comments:

When the old woman who lived in a shoe opened her home to her sister who had an equally large family, what did she have to do? That’s right, she needed more room. So she traded in her size-nine loafer for a size-46 clown shoe. And when she did that, she thought that it was a good time to say goodbye to all those old socks, and only move the nice new socks.

Can you guess what’s coming? If not, here’s another tip. Last year many of you enjoyed the Pyramyd Air Garage Sale. Some even mentioned they wished they had been there to see them….

I mentioned Leapers new green laser in my SHOT Show report, and CJr jumped on it! Then Kevin reminded me recently. So, here it goes! 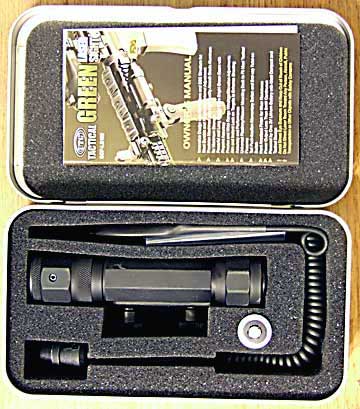 Here is the Leapers green laser in its aluminum carrying case. The Weaver mount is permanently attached, so anything you mount to must have a Weaver base. The laser can be operated directly by a switch in the end of the tube or indirectly by swapping the coiled pigtail end cap for the direct switch. One CR 134A cell is required to operate.

What’s so special about green lasers?
Compared to other colored lasers, the green laser appears approximately five times brighter in daylight and about 20 times brighter at night. Since we’re talking about airgun and, more importantly, airsoft applications, the most common laser color is red.

Laser colors are measured by their wavelengths. A red laser is in the 635 or 671 nanometer (nm) wavelength. A green laser has a 532 nm wavelength, which you can see is noticeably shorter. The human eye responds more (is more sensitive) to light at this wavelength, so the dot is easier to see. At the SHOT Show, I’ve been able to see the dot against the black ceiling girders at ranges out to about 100 meters.

But you will probably not be using the laser in a building with a black ceiling–at least not all the time. What you want to know is how well this laser works outdoors in the real world. Let me demonstrate the difference between a red laser of comparable cost and quality against the Leapers green laser. The red laser is AirForce’s LS-1.

Both of the lasers tested have a maximum output of less than 5 milliwatts. That’s a requirement for the commercial market. By comparison, the industrial laser that put the words on the side of your Gamo air rifle puts out about 25 watts, and the Terminator tried to buy a 40 watt laser when he came back to LA to hunt Sarah Conner. The pawn shop wouldn’t be getting lasers that powerful for another 30 years, so he had to go with a 1911 Long Slide with a laser designator. 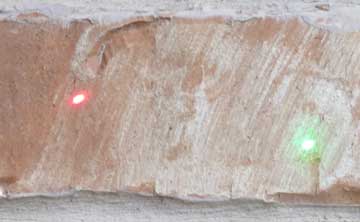 Both the red and the Leapers green laser are shown on brick at 6 feet. At this distance, they appear of similar brightness, though the green dot seems larger.

In this shot, both the red and green laser are shown against a dark clapboard at 6 feet. The red dot is an oval from hand movement of the person projecting it, but it is easier to see that the green dot is brighter. 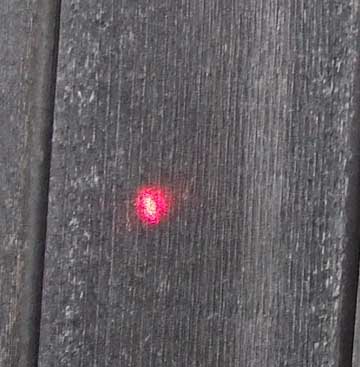 The red dot of the LS-1 has been projected about 40 feet against a fence board in daylight under overcast conditions. Once again, the person holding the laser is shaking. The camera was about three feet from the dot when the picture was taken. 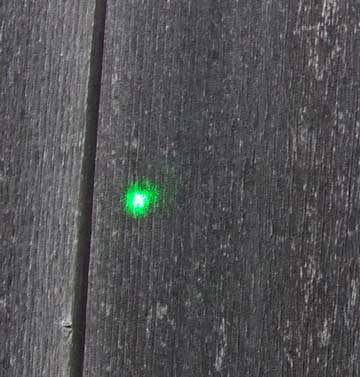 The green dot is projected against the same board under identical conditions. It begins to become evident that the green dot is much brighter at this distance.

More on performance
Outdoors at 40 feet, my wife and I were both able to see both dots against a dark wooden fence on an overcast day, but the red dot was very faint at that point. If seen through a scope, visibility would extend to perhaps 50-60 yards on a similar day.

The green dot was still visible with the unaided eye at 50 yards. Seen through a scope, it would still be visible past 125 yards on an overcast day.

Why a laser?
What could you do with a laser? Well, they’re used as designators–similar to sights but since they project, you don’t have to look through anything. Once the dot is on target, and assuming the gun has been sighted-in, the pellet/bullet should go to the dot. The Terminator uses one in the first movie and Buzz Lightyear has about 10,000 trained on him when he lands on Zur’s planet in Toy Story II.

But why a laser for airguns?
First of all, lasers are highly desired by the airsoft crowd. I shouldn’t have to explain why to them.

For regular pellet guns, there’s a purpose to having a laser mounted. You can sight it in for a close range–one at which your scope would be suffering a huge parallax problem, and leave your scope sighted-in for more distant targets. The US Department of Agriculture hunts feral pigeons nesting on bridge overpasses in big cities. They’re reluctant to stick the barrel of their rifles out the car window most of the time, but they can rest the gun on the seat and use the laser out to 30 feet for deadly shots. The USDA has hundreds of airguns in this service around the US, and they’ve used this technique for a long time.

Pest exterminators might use a laser similarly. When encountering a squirrel in an attic or crawlspace at 20 feet, how nice to just project the dot and shoot. I had a possum on my back porch several nights ago. With my entire arsenal, I had no way of engaging the critter at 15 feet. And so it goes.

And don’t worry, there are still green laser designators selling for $1,700, so if snob appeal is your thing, there are still some toys for you out there. But the common man can now afford join in the fun. 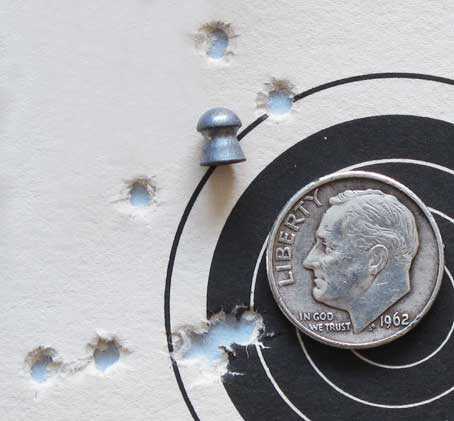