Guest blogger
Chuck decided to gamble on a pellet gun he saw in this blog. Read what he thinks about it now. If you’d like to write a guest post for this blog, please email me. 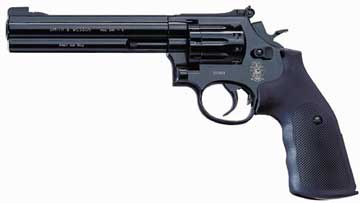 Smith & Wesson 586 is very realistic, as Chuck found out!

Let me start out by saying the Smith & Wesson 586 air pistol fits my needs perfectly. Of course, my needs may not be the same as most air pistol owners. I hear a lot of talk about accuracy, which is admittedly important, but that’s not my primary reason for choosing this particular pistol.

I’m not interested in pistol competition/match shooting or even obtaining quarter-inch groups from this gun. Nor am I interested in its value as a collector’s item, even though, from what I hear, it may be suitable for all the above. I chose this pistol because it resembles a firearm in feel, size, weight and operation. What’s so important about that? Although it would be foolish to use an airgun for self defense (don’t even think of doing that!), this one is ideal for self-defense training! I want to use it to practice shooting with confidence one-handed, two-handed, through the sights, sideways like a gangsta, from the hip and everything in between.

I own a firearm that I keep for home defense, a .38 Special +P Airweight. Someday, if my state wakes up, I will pursue a concealed carry license. In any case, I want to be the best I can be in handling and shooting my firearm of choice. Today, for me that firearm is a revolver because of its simplicity, safety and preparedness. So, how does that make the S&W 586 such a great choice? Why not just go out and practice with the real thing? I’ll tell you why. It’s darned expensive!

I first researched getting a .22LR version of my pistol. I found a couple companies that make them. The idea seemed plausible, and .22 ammo is certainly cheaper than the ammo my firearm uses. However, a visit to the local gun shop discouraged that notion right away. New .22 revolvers were selling for over $500 apiece. The cheapest .22 ammo I could find was $1.49 for 50. If I’m going to spend that much money, it should go into a really good air rifle. I considered looking for a used version, but I’m not knowledgeable enough to know a good used gun when I see one. I’d be lucky to find one even $100 cheaper, I thought. That’s when the S&W 586 caught my eye.

I was rummaging through back issues of the Pyramyd Air blog when I came across a couple posts evaluating the S&W 586. Smith & Wesson 586 & 686 revolvers and S&W 586 & 686 pellet guns – Part 2. After reading those posts, I knew this was the tool I was looking for. I felt I could count on its quality and reliability. It’s much cheaper than the firearm, plus the pellets will be a lot cheaper than .22LR, not to mention that I already have plenty of pellets because of my interest in air rifles. As an added bonus, I can practice in my 33′ indoor range in any weather, any time of year and without driving 20 miles to the outdoor range.

I purchased the 586 (from Pyramyd Air) to see if it could live up to my expectations. I’ll tell you right now it has. I was impressed with the gun as soon as I removed the box lid. If I hadn’t known better, I’d have sworn they sent me a firearm instead of an airgun. When I took it out of the box, I noticed it was a little larger and heavier than my firearm. So, it won’t be exactly apples to apples, but it’s close enough for my needs.

My first concern, since it was a CO2 pistol, is if the cost of cartridges is going to be a factor. After shooting about 500 pellets, I found that CO2 is not going to be costly. The cylinders (magazines) hold 10 pellets, and I can shoot through six cylinders easily before accuracy begins to drop off significantly. Sixty pellets from one CO2 cartridge per practice session is within my budget.

The gun is very reliable and very easy to shoot in both single- and double-action. Very similar to my firearm. The only time I had a problem with jamming was when there wasn’t enough gas pressure for the pellet to fully clear the cylinder, causing the pellet to stick half into the breech. Jams happened around 80-90 shots on the same CO2 cartridge. They’re easily cleared with a rod down the barrel, forcing the pellet back into the cylinder. I use very thick weed trimmer line so I don’t damage the crown. It also works as a great cleaning rod.

My first attempt at shooting was not very productive. In my book, 33′ is a long distance for a pistol. I quickly moved up to 15 feet and worked my way back from there. I was shooting at an 8.5″x11″ target. After eight sessions, I can now hit it consistently using the open sights at 33 feet. That size paper is smaller than a man’s chest, so I’m in the ballpark without the recoil factor. From the hip…thats another story. Very small movements of the gun result in very large misses. I’m not sure I’ll ever be able to master this. Only some very special people have. We’ll see. I haven’t tried “gangsta” yet.

I’ve found that I can be productive as long as I use the sights. My first priority was quick target acquisition with open sights. Since a defensive distance in my house will be about 12′, I think I’m on the right track.

In the beginning, I fully expected to be able to consistently hit the vital areas of a man-sized target at 33′ (with the actual firearm). I think my experience with the 586 has supported that goal. The only things I won’t be able to practice this way will be the recoil of the firearm and the anxiety and stress of facing a real threat. The former, recoil experience, I can practice at the local gun range with the firearm once in a while. It is my hope and desire that I never need to experience the latter.

A postscript by B.B.
Edith and I try to visit the indoor gun range once a month to stay current with our 1911 defense pistols. As a comment to what Chuck says about quick sighting and 12′ distances in home defense, we can relate to both of those. The Texas qualification course for a Concealed Carry permit has you shooting at 3, 7 and 15 yards. These are considered reasonable defensive distances.

When we go to the range, we always start out at 3 yards, then progress to 15 yards. I can vouch for the fact that my sights, which are called Heinie 8-Ball sights, are the fastest-acquiring sights I’ve ever seen. From a starting position, where the pistol is rested on the table, I can get two rounds through the 9- or 10-ring at 15 yards in less than 1.5 seconds. This level of shooting was never close to possible for me before getting these sights.

The 8-ball sight is two large white dots. One is on the front post and the other is centered below the rear notch. You stack them like the number 8 when you shoot–but in reality it’s even faster than that. I just put the front ball on the spot I want to hit and the bullet lands within 3″…most of the time. I seldom even see the rear ball. 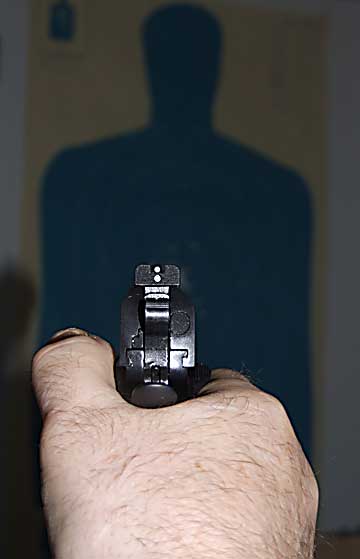 Heinie 8-Ball sights are the fastest pistol sights I’ve seen. Most of the time, all I see is the front ball, and that’s where the bullet goes. The special handling technique I mention in the report is shown in this picture. My thumb is hooked over the manual safety, which counteracts muzzle flip during recoil. As a result, the 1911 becomes very controllable!

I’ve been a target pistol shooter all my life (shooting handguns for over 45 years), and it did me no good for defensive shooting. After reading one book on the subject three years ago and learning the importance of a proper grip on the gun, I’ve gone from being a plodder to a pretty fast reactive shooter. I’m 61, so this isn’t the result of quick reflexes. It’s the result of a technique that actually works. The technique makes the gun recoil so little that Edith became an enthusiastic .45 ACP shooter, where for the previous 20 years she loathed my loaded-down .38 Special loads in a heavy-frame .357 Magnum Ruger revolver. 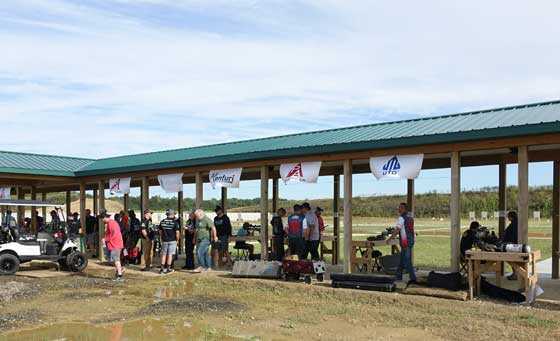 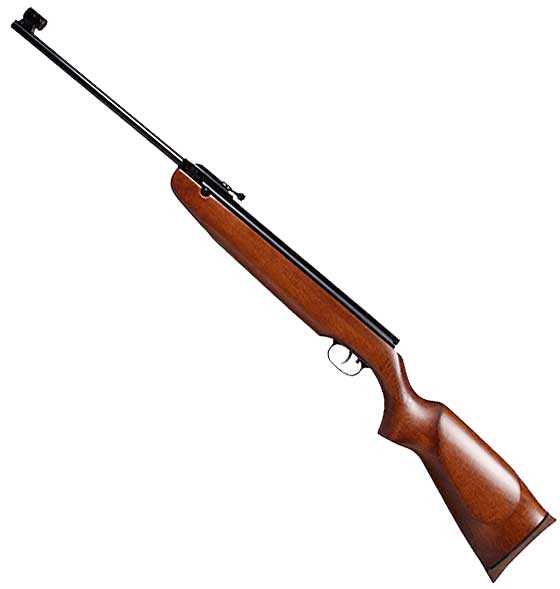 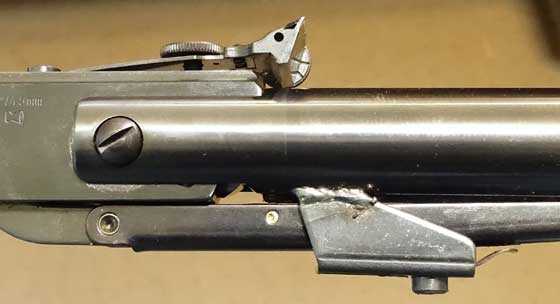