First an announcement: Friday, Saturday and Sunday (May 15-17), the NRA will conduct its Annual Meetings in Phoenix, AZ. There’s a show hall, which is open to the public. It’s like a mini-SHOT Show. Admission is $10, but you can show your NRA membership card to get in free (or join at the door and get in free). There’s an indoor shooting range, where you can shoot a large assortment of airguns, including the new AirForce Airguns Edge. At noon, 2pm and 4pm daily, there will be a demonstration shooting of big bore airguns.

Hammerli’s Pneuma is an exciting new PCP rifle at a great price!

The prices of precharged pneumatic rifles have been dropping over the past several years, and one of the newest guns on the market is the Hammerli Pneuma. The Pneuma is a single-shot PCP that comes in either .177 or .22. Most buyers will choose the .22 caliber for the power, but I opted to test the .177 model for you.

Hammerli advertises the velocity at 1,200 f.p.s. in .177, so I will test the rifle with heavy pellets. The goal will be to keep the exit velocity under 1,000 f.p.s. for best accuracy. Twenty-two caliber owners will not face this issue, as the top speed in that caliber is listed as 1,050 f.p.s. These velocities are for the very lightest pellets, of course, so I expect to be able to control the rifle with heavier pellets.

This is a sidelever bolt-action rifle that loads the pellet directly into the breech. The stock is a synthetic thumbhole that’s fully ambidextrous. It has both a Monte Carlo comb and a very low raised cheekpiece on both sides. A soft black rubber buttpad adjusts both up and down for better fit.

The stock is a matte dark charcoal and the metal is a hunter black–slightly shinier than matte but not a deep shine.

The overall length of the rifle is 38.5 inches, and it weighs 7.25 lbs. While that sounds light, the weight is centered on the flat just forward of the triggerguard, and the rifle feels very solid. It should balance well for benchrest shooting.

The sights are a fiberoptic front and rear post and bead with notch. The rear sight adjusts in both directions and the front adjusts for elevation by tipping up and down in the rear. These are some of the best sights I’ve seen on a rifle that most owners will probably scope anyhow.

Speaking of scopes, the Pneuma has a unique scope base that accepts both 11 mm and Weaver rings on the same base. It’s a novel idea that will suit everybody. 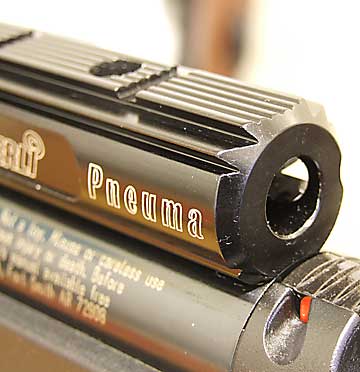 This scope base will accept both 11mm rings and Weaver rings. You can see both dovetails clearly.

The muzzle of the 19-inch barrel is threaded to take a 1/2×20 silencer. Unfortunately, my firearm silencer is threaded with 28 TPI, so I was unable to try it. The barrel is held to the reservoir by two wide plastic hangers. Since the reservoir is removable, the influence on the barrel is probably reduced. In other words, it probably doesn’t move the barrel much as the pressure drops.

A manometer (air pressure gauge) is built into the end of the removable air reservoir. It reads in bar, only, and the rifle is set up to accept a max fill of 200 bar, which is 2,900 psi. You can fill without removing the reservoir by pushing a blank plug out of the fill port and inserting the quick-disconnect probe. The other end of the probe is threaded 1/8″ BSPP, which is a very common thread pattern for PCP fill equipment. It connected to my Hill pump, and I was able to fill the rifle right away. 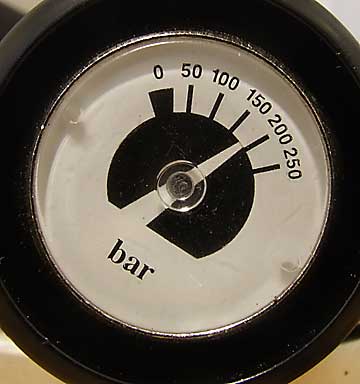 Pressure gauge or manometer reads in bar only and records a 200-bar fill.

A bleed device also comes with the gun, so the owner can bleed out the air at any time. To depressurize the gun, the reservoir has to come out of the rifle because the bleed device acts on the end that screws into the rifle’s action. You would want to do this if you were sending the rifle somewhere by public carrier like UPS.

There are also two extra sets of o-rings for the fill probe, though they won’t be needed soon if you keep the rings on the fill probe lubricated with silicone grease.

The trigger is two-stage and adjustable for the length of the first stage and for pull weight. I will report on it in greater detail during the accuracy test.

I’ve already listed features that would have cost no less than $650 just two years ago. So, the Pneuma is a price-breaker. It promises good power in the 20-22 foot-pound range in .177 and up to 30 foot-pounds in .22. Accuracy will be the deciding factor; and if this is an accurate rifle, it’ll be one to consider.