I’m on the road again starting today. I’m heading to Crosman and then on to the American Airgunner studio. I should be back in the office next Friday, or perhaps on Thursday.

Today, we’ll look at the accuracy of the Gamo Extreme CO2. Before we do that, though, I had to mount a scope. The BSA 2-7x scope that came with my Beeman C1 carbine wasn’t doing anything at the moment, so I switched it to the Extreme CO2 and sighted-in at 10 feet. It took two shots to get on paper, and I was ready to move back to 25 yards. [I got distracted due to so many things happening at the same time & so many guns arriving for testing and review, that I completely spaced out the fact that the Extreme CO2 comes with a scope and one-piece mount!]

As I was doing that, however, it dawned on me what is different about this rifle. The circular clip doesn’t stick up above the top of the receiver! That’s a big deal, because it means you can mount a scope with a low profile. Almost every other circular clip on CO2 and PCP repeaters sticks up above the receiver, necessitating the use of two-piece scope mounts and often high mounts for clearance. 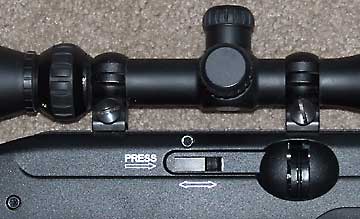 The circular clip doesn’t stick up above the receiver!

At 25 yards, the first pellet was low and to the right, so I made a final adjustment that brought the pellets to the bullseye. Then I proceeded to shoot some groups. The first was 10 JSB Exact Jumbo 15.8-grain pellets.

JSB Exacts
15.8-grain JSB Exacts printed high on the bull at 25 yards. A group of ten measured 1.075″. The wind was dead calm and there was nothing to disturb the pellet’s flight. I stopped at 10 because that was a clip full and it seemed reasonable. 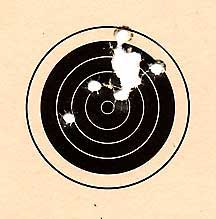 JSB Exact heavies
Next, I tried a group of 10 of the new 18-grain JSB Exact heavy pellets. They went into a tighter 0.974″ group at 25 yards. You can see the performance in the pictures. While I was shooting these, the sliding forearm came off the gun three times, so a word of caution to shooters–don’t pull it forward too hard! 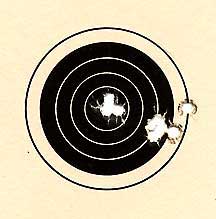 JSB Exact 18-grain pellets made this 10-shot group. The elevation was adjusted down but nothing else was changed

Crosman Premier
The next pellet I tried was the Crosman Premier. It shifted the point of aim and was clearly not a good pellet in this rifle. The 10-shot group measures 1.538″ and is way too open. 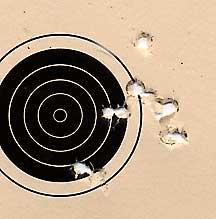 Crosman Premiers were obviously not the right pellets for the rifle.

RWS Superdome
Finally I tried 10 RWS Superdome pellets. They gave the smallest group of the day, at just 0.928.” 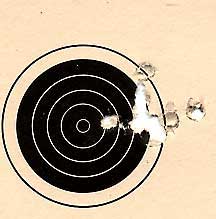 RWS Superdomes were the best of the four pellets tested.

Shooting the rifle
The 88-gram CO2 cartridges are a real blessing when you just want to shoot and not be bothered with upkeep. All you have to do is load the clip and put it back in the receiver for the next 10 shots. The trigger has a long, somewhat creepy pull. Because this is a gas gun, I was able to lay it directly on a sandbag, which made sighting easier and the heavy trigger was not so much of a problem. The BSA scope that had been doubtful in the test of the C1 performed very well in this test. It isn’t as clear as most Leapers scopes I use, but plenty clear on a sunny day. The focus was sharp and crisp.

So, the rifle comes through the test with good marks. It’s not in the Benjamin Discovery class, but it’s probably just as accurate as a Hammerli 850 Air Magnum, which many of you wondered about. And we know that it’s also plenty powerful. A good repeater for not a lot of money.