Today, I’ll tell you more about the 2010 SHOT Show, plus I’ll tell you about the Pawn Stars pawn shop I visited. I’ll even throw in a bit about the car museum I saw at the Imperial Palace. But the SHOT Show is first.

Before I begin, I want to thank my pal Earl (Mac) McDonald for taking all the pictures you are about to see, as well as those shown in Part 1. Mac makes my SHOT Show go much faster and smoother than if I did it alone.

Air Arms in the Pyramyd Air booth
At the Air Arms section inside Pyramyd Air’s booth I was shown the new MPR rifle. It has undergone some changes to make it acceptable in NRA Sporter-class matches, according to Air Arms’ Bill Saunders.

New Air Arms MPR is set up for NRA Sporter-class competition.
Remaining in the Pyramyd Air booth a little longer, I found a remarkable new kind of folding knife at the show, and I showed it to Josh Ungier, who immediately placed an order. The blade locks in 35 different positions, so difficult cuts of tubing, rope and carpet become easy. It can also become a formidable close combat weapon when the blade is locked at a 90-deg. angle. I didn’t take a picture because I hope to test it for you very soon.

I also saw their new Marlin BB gun that has a pronounced western look. They call it the Cowboy, and it looks like a real Western rifle. I’ll test one as soon as possible.

The new Marlin Cowboy looks very Western. It’s a BB gun.
Back to Umarex
Umarex is now branding guns under their own name, and one of them is the new Steel Storm BB repeater. It shoots 6-round bursts or semiautomatic shots one at a time, runs on CO2 and has blowback action. The power for shooting comes from two 12-gram CO2 cartridges. It looks a lot like a Drozd, but expect it to sell for less. 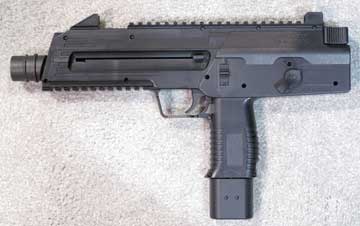 Umarex Steel Storm is a BB submachine gun. Burst-fire and semi-auto, as well. Remind you of anything?
Gamo again
On day four, I ran into Norvin Hornberger at Gamo, who walked me through all their new products. And they had quite a few. I first told him how delighted I was to see three .25 caliber pellets in the booth and he immediately called over the Gamo USA CEO to hear me. I told them both that the Hunter Extreme in .25 and their three new pellets were going to help revive the quarter-inch bore–something I told you guys in the first report. Norvin told me the company was so entrenched in .177 sales that even making .22 caliber guns was a stretch, and that the .25 seemed like a miracle. I responded that I think they may be surprised by the sales, since there are a number of .25 caliber enthusiasts here in the U.S. Especially, the hunters will love the extra smashing power.

Gamo SOCOM Extreme is another hypervelocity spring rifle that joins the Hunter Extreme this year. 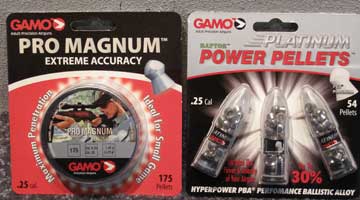 Two of the three new Gamo pellets that will be offered in .25 caliber.
Norvin told me that the new Gamo SOCOM Extreme, another 1,600 f.p.s. springer, will probably also be converted to .25 if sales are good for the Hunter Extreme. Of course, the .22 version will be available even sooner this year.

Another big reason to be in the Gamo booth are the new ND3 and ND5 laser illuminators. These are not flashlights. They’re actual lasers that can be focused to have larger beams at distance. They make it possible to see game through a standard telescopic sight without night vision. For hunters, they’ll soon become essential, since you will be able to see game at night a half-mile away without spooking anything. 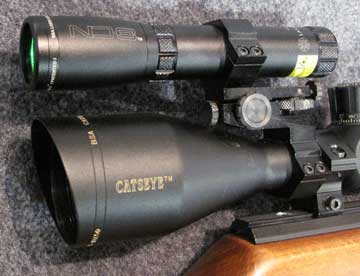 The light clamped to the scope is a Gamo ND3 laser illuminator. It can be aligned with your scope to allow you to see game beyond the range at which you can shoot.
Fun times
The show ended on a Friday, so that evening Mac and I saw Terry Fator, the impersonating ventriloquist at the Mirage. I’ve seen a few Vegas shows, but this was the best of all. Fator told the audience to take all the pictures they wanted and to video the portions of the show they liked best.


At the end of the show, he went into his souvenir store and stayed until the last guest had a chance to get his autograph and get their picture taken with him. The profits from all the sales are turned over to the armed forces for the benefit of troops stationed overseas. No Vegas headliner has ever done these things before, which tells you a lot about the man who won America’s Got Talent.

The next morning, we hopped in a cab and went downtown to the Gold and Silver pawn shop–home of the History Channel’s Pawn Stars. Chumlee was the only member of the cast in the store when I was there, and I asked him where all the old guns were. He told me that about 100 people a day of the 700 that come into the store ask the same thing, so the old guns never stay long. Ten minutes later I heard him explaining the same thing to another tourist/customer. 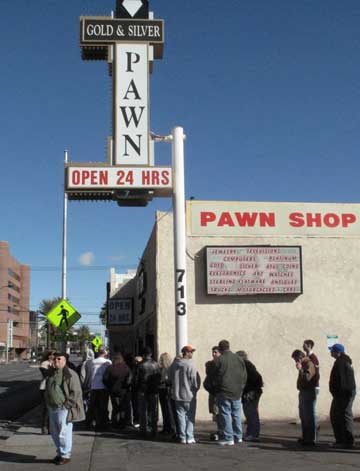 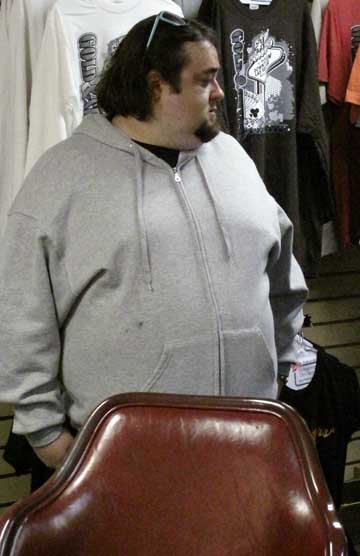 Poor Chumlee has to answer the same questions from hundreds of customers every day. He takes photos with about every fifth customer. Those are Pawn Stars souvenir shirts on the wall behind him. 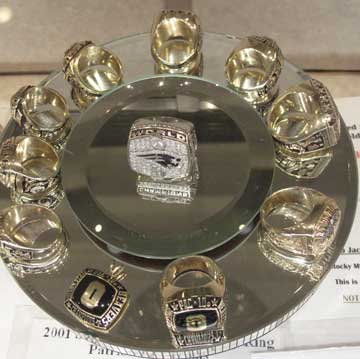 These are the championship rings they have on display. The 2001 Super Bowl ring in the center is priced at $100,000.
As you might expect, a lot of the neat stuff you see them buy on the show is already gone, but I did see a few things from the show. Rick’s refurbished barber chair is on sale, and the wooden airplane propeller that might be linked to Charles Lindberg was mounted on the wall. No prices were seen for these items. The Coke vending machine was there (or another one that looked just like it), and I think Chumlee’s Harley is for sale for $20,000. It sure looked like the bike he bought from them in 2009.

The hot-air balloon Cory bought hasn’t sold yet. The worked a deal to lease it back to the guy they bought it from, so at least they’re making some money from it.

After the visit, we went over to the Imperial Palace to see their car museum. Many of the cars were for sale, and they apparently buy and sell from there all the time. Over 300 restored cars were on display, with the cheapest selling for $14,000 and the most expensive at $1.5 million. 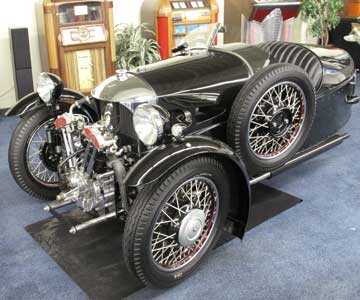 Three-wheel car with a two-cylinder JAP motorcycle engine hung out in front was one of the quirky cars at the Imperial Palace car museum.
This was definitely the best SHOT Show I ever attended. It had tons of new products, and this year I stayed an extra day to depressurize after the show closed. The coming year should be an exciting one for all airgunners.