Well, one of you asked to see the AirForce target sight set mounted on the Daisy 953, and in a moment of weakness I said I’d do it. Forget the fact that I have already tested the rifle with a scope, which is potentially more accurate. They wanted to see what it would do with these sights and I agreed. Today’s the day.

Installation of the sights
Installation was easy. The front sight could be installed on either side of the muzzle, and I chose the right side for no particular reason. Of course, that sight can also be installed at a wide range of heights. Since the 953 doesn’t let you look through the barrel, I guessed what the right height might be and put it there. That guess was based on where the rear sight was, of course. 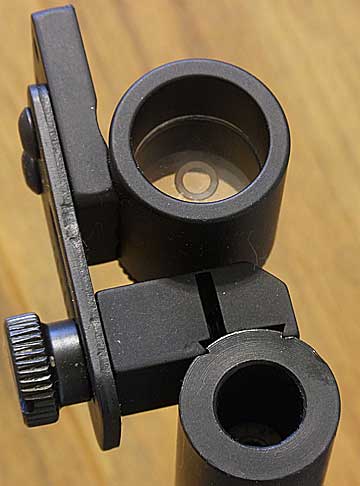 Front sight was installed in a low position. It’s using a clear aperture, the same as modern Precision-class rifles.

The rear sight installs on the left side of the receiver, and once again has a wide range of heights at which it can be locked. After that, all vertical adjustments are made with the adjustment knobs. 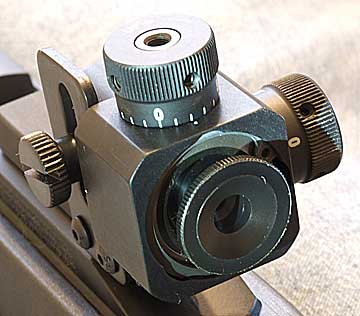 Rear sight has plenty of internal adjustability. When that’s not enough, it goes up and down on a stalk.

Change to the test plan
Since this is a fifth report on this gun and the third accuracy test, I decided to forego the 10-shot groups. Actually, there were both 10- and 20-shot groups for the 953 since I last tested it so long ago. Today, I’m doing just five per pellet.

I also now know which pellets work best in the gun, so those are the ones I’m shooting. And I’m adding one domed pellet because someone asked me to test it.

Today’s shooting is from a rested rifle at 10 meters using an MTM rifle rest. And before anyone asks, yes, I did notice that the rifle jumps slightly to the left when it fires. When I say “slightly,” I mean that the front aperture shifts about half a bullseye to the left.

RWS R10 Match Heavy pellets
RWS R10 Match Heavy pellets were fired before the rear sight was adjusted, so the group was low in the bull. As in all previous tests of the 953, the R10s continued to group well, though you must bear in mind that these are only 5-shot groups, so they will look much smaller than the 10- and 20-shot groups I fired last year.

The group is low on the bull because the sights were not adjusted. But the R10s still shoot well in the 953.

JSB Exact lites
JSB Exact 8.4-grain pellets were tried next because another reader suggested them to me. Since I had an easily adjustable rear sight on the gun, I clicked up 12 clicks to bring the group closer to the center of the bull.

This group of JSB Exact lites climbed on the bull from the adjustment put into the rear sight. They group okay but not as good as the R10s at this distance. At longer range–say 25 yards–domed pellets like these will overtake and pass the non-aerodynamic wadcutters.

There you have it. The 953 accepted the AirForce target sights without a problem, and they turned in great results on target. This test demonstrates that the adjustments on the rear sight do work as advertised.

Although I doubt that too many shooters will mount this sight set on a 953, you can consider this test was also for an 853 and a 753, because their receivers are very close to the 953’s receiver. The rear sight works precisely as you might expect and there seems to be no backlash in the adjustments.

Finally, remember I shot only five shots at each target. That and that, alone, was the difference between this test and the targets in Parts 3 and 4. 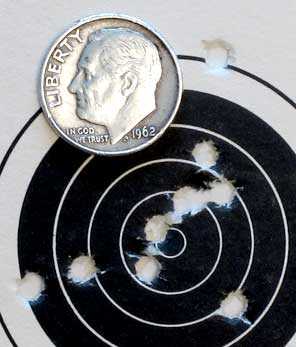