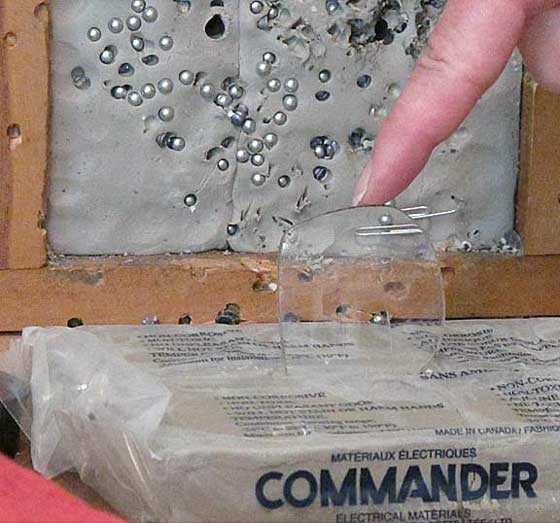 This report is based on a test that turned out exactly the opposite from what I predicted. I was so wrong that I want the world to know about it.

Are safety glasses necessary?
I wear bifocals. And modern glasses are often made from plastic lenses, especially my Lenscrafters ones. So, for decades I have assumed that plastic is plastic and that my bifocals were just as good as a cheap pair of safety glasses. After all, as cheap as they are, my lenses cost over $100 and the cheapest safety glasses go for as little as $4.95. I thought my lenses were supposed to be shatterproof. So, they should be just as good or better than cheap safety glasses.

That’s why I constructed a test. I had a set of lenses from my old bifocals — the ones I’d been using as safety glasses for decades when shooting firearms and airguns. I stuck a lens between two duct seal pugs in front of my silent pellet trap and shot it with a Hobby pellet from a Webley Hurricane pistol. The Hurricane shoots Hobbys at about 450 f.p.s., so I felt that was slow enough to start with. If there was no damage, I planned to ramp up to a Beeman P1 that would add about 100 f.p.s. That was the test.

The impact of the pellet will simulate all sorts of horrible things hitting the glasses. I know my test isn’t scientific, but it is revealing.

The lens is held between two pugs of duct seal. Edith’s finger was not there when the shot was taken.

One shot smashed the lens. No protection!

I was going to test the other lens with steel BBs and finish the report. But I didn’t get that far. The first shot turned my “safety” bifocal lens into a million shards of plastic! Blew it apart. We’ll be picking up the pieces for weeks.

Okay, I thought. Can these el cheapo safety glasses be any better? Up went a pair of nondescript safety glasses, and I shot them with the Hurricane. The right temple was blown off the glasses when the pellet smashed against the lens, which did not break. Instead, it slid along the curve of the lens into the temple. 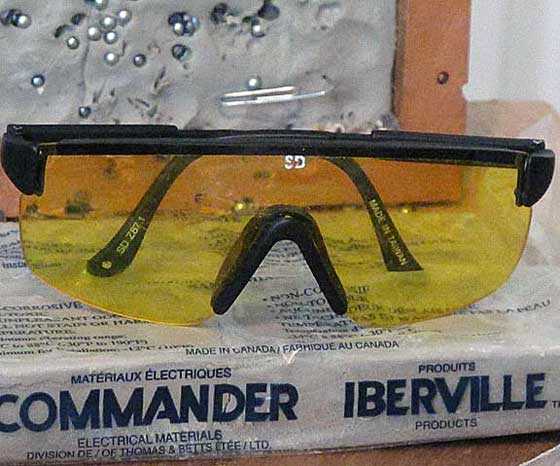 A real pair of safety glasses were next. Same test. 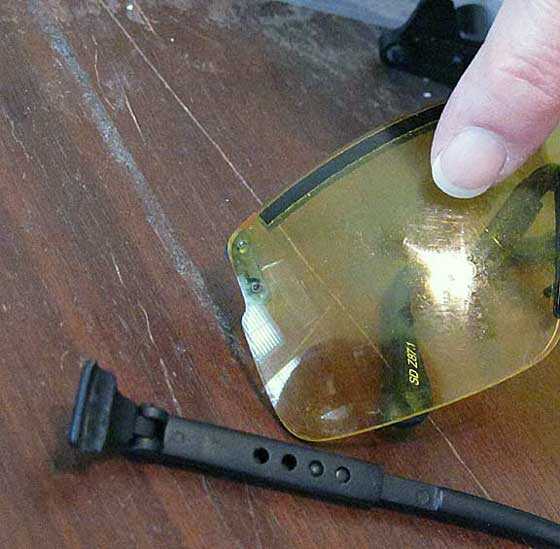 The pellet hit the lens where indicated and flattened out, then followed the curve of the lens to blow off the right temple.

Okay, so the lesson we should all take away from this is: use REAL safety glasses! Don’t assume that your prescription glasses can do the job unless you know for certain they can.

The wife of Pyramyd Air owner Josh Ungier is a noted eye surgeon in Cleveland. I’m quite sure I will catch a little well-deserved chewing out for being so stupid as to think regular plastic eyeglass lenses could substitute for safety glasses. But after seeing what I saw in this test, I thought the best thing to do was to spread the news as fast as I could, because I know there are others who are doing the same thing that I did.

From now on, it’s safety glasses for me. I even have a pair with bifocals in them!

161 thoughts on “How about safety glasses?”