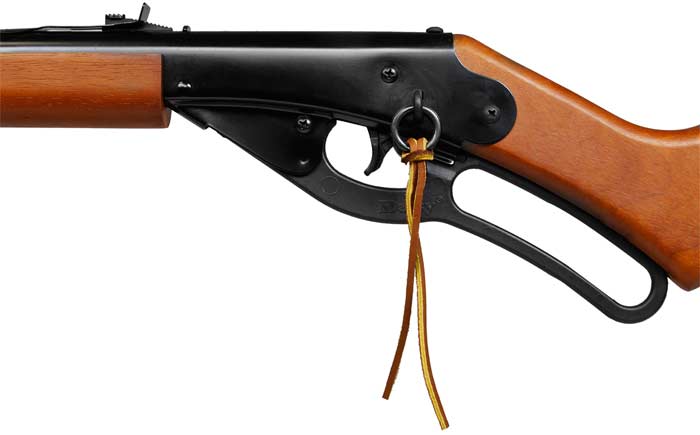 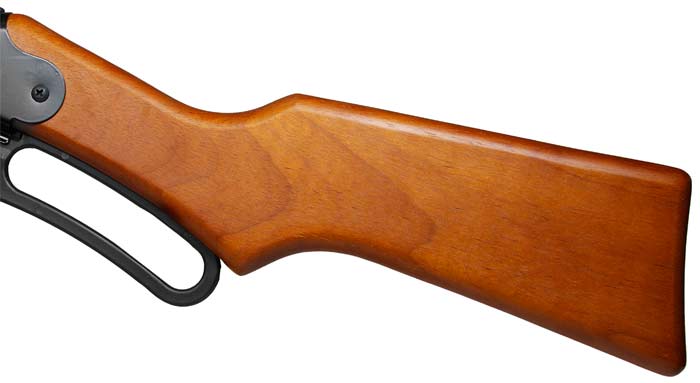 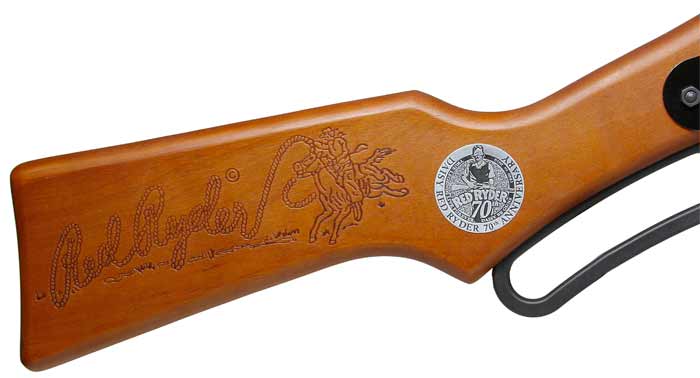 See other products by Daisy

Comes with either a silver or black barrel band.

The legendary Red Ryder! Who hasn't wanted one of these? Daisy's 1938 Red Ryder model is still a favorite of boys and girls (and men and women). This special 70th Anniversary Edition of America's favorite airgun has a special commemorative medallion in the stock. It's bound to be a collectible. A great gift for kids and adults!

Suitable for shooters 10 and older (with adult supervision), this lever-action spring rifle is lightweight, easy to cock and durable. The solid wood forearm and engraved wood stock are just the right length for young shooters.

With a capacity of 650 BBs (Never shoot BBs at hard objects!), you'll be shooting all day long! The rifle comes with a blade and ramp front sight and an adjustable open rear sight. It has a stamped metal receiver.

This rifle is perfect for plinking, shooting paper targets and for training new shooters. The Red Ryder is intended for shooting targets UP TO 5 meters away...about 16.5 feet! Safety glasses for the shooter and everyone else in the vicinity are necessary, as BBs can bounce back.

You'll be shooting so much that you better load up on BBs. Click the AMMO link to stock up. Click the ACCESSORIES link to find fun targets and other gear.

See other products by Daisy

Everyting, lighht, but not too light, powerful

Can't think of any. The Red Ryder's benn around for 60 yrars.

I liked the looks of it. But disapointed in the use of plastic or carbon fiber. The price was right.

Get rid of the plastic . I owned an original back 50 yrs. ago. The hand lever was iron and the place to put in the bb's was metal. Why couldn't you make this one like an original.

Still shoots the same! don't know what kind of wood or is it plastic used in the stock and forearm.

Thank you for your comment!
What was the price? It's not showing it, the silver option, or availability :(
Add comment to this review
January 9, 2011
By BaronR

I thought the "70th Anniversary" emblem would be a decal, perhaps lithographed on in silver paint. Instead I found a metal casting, flawlessly inset into the wood of the stock so that it was almost exactly flush with the surface. The plastic trigger assembly is comfortable, and probably an improvement over the traditional stamped sheetmetal version. Daisy has added seven click-stops to the cocking mechanism, probably as an "anti-bear trap" feature. If you don't fully cock your Red Ryder, NOTHING will happen -- which means nothing BAD will happen. Just finish cocking it, and it will shoot.

I wouldn't mind the plastic cocking lever if it didn't feel like I was going to break it off every time I cocked the gun, although it did get easier to cock after several cycles bedded in the working parts and worked in the lube. The famous "Red Ryder" stamping was very unevenly impressed into the wood of my example (barely visible near the center), but I suspect many of the Originals suffered the same shortcoming. Otherwise, changes should be made with extreme caution; this is a replica, after all.

I purchased a Daisy Model 25 replica from Pyramid at the same time I purchased my Red Ryder; see my review of the Model 25. If you are considering a choice between these two guns, you should know that the Model 25 has a much heavier, more substantial feel, fewer plastic parts, and might well be more satisfying to own. But the Model 25 holds only 50 rounds, while the Red Ryder holds hundreds, and is easier to load. Both guns are about equally powerful. The Red Ryder's sights, on the other hand, have no windage adjustment. Neither did the Original, so adding windage sights would be inauthentic.

Thank you for your comment!
I would appreciate it more, if they would eschew plastic parts entirely. I love that the Medallion is real, however-thank you for letting us know that!
Add comment to this review
+ Load More