On Saturday night, I noticed that my left arm, the one with an IV line, was swollen. Being prudent, Edith and I went to the ER. Since I had no pain, no one thought it was a big deal…but it was. Turns out that I have a very small blood clot. While this sounds bad, it’s actually a blessing in disguise. The doctors are giving me a new IV line and pulling out the old one, they’re now doing imaging and procedures that were originally scheduled to happen in the coming weeks, and they’re moving me along very quickly to finally resolve my pancreatitis.

Today, we’ll do the all-important accuracy test for the Benjamin Trail Nitro Piston Hardwood rifle. Before I make the report, I must tell you that Mac spent several weeks doing this test over and over. He was unsatisfied with the results and wanted to make certain nothing fundamental was influencing the outcome. In the end, we decided that we are not the H.P. White Laboratory, and at some point we have to act like a regular customer.

With that kind of introduction I’m sure I’ve captured your attention.

Mac shot the rifle at 30 yards off a rest. He used the artillery hold. As he shot, the stock screws loosened continually. And the scope required 150 clicks of up elevation to get on target at 30 yards. He used a hard paper shim under the mount portion of the rear ring. Under compression, the shim is the thickness of an American quarter, which is a huge shim thickness! It raised the point of impact by about six inches. 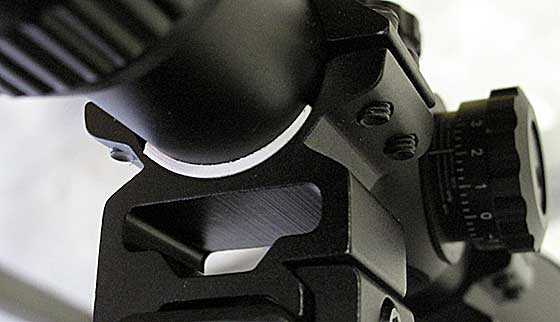 Thick paper shim compressed to the size of an American quarter, it raised the point of impact 6 inches at 30 yards. This is really too thick a shim to use with a scope. Be careful when tightening scope caps or you’ll crush the tube.

JSB Exact Express
JSB Exact Express domes fit the bore very loosely and were the least accurate pellets tested. They gave a group size over 2 inches at 30 yards. While good in many rifles, this clearly not the pellet for the Benjamin Trail Nitro Piston Hardwood. 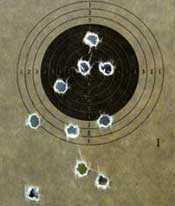 JSB Exact Jumbo heavy
The 18.1-grain JSB Exact Jumbo Jeavy pellet did better, as both Mac and I expected. Being a heavier pellet, it provides more resistance to the explosive thrust of the Nitro Piston. The best group was 1.75 inches for 10 shots at 30 yards. That’s still not good enough for hunting accuracy. 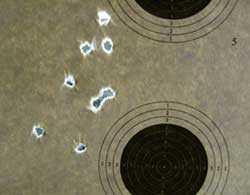 JSB Exact Jumbo heavy pellets were second-best but still not worth pursuing at 30 yards.

Crosman Premiers
Not surprisingly, the Crosman Premier pellet performed best of all. Ten shots went into 1.25 inches at 30 yards. Some of the groups had smaller groups within them, but fliers always opened them up. The Premier pellet is made of hardened lead and provides its resistance by taking a lot of energy to expand the skirt into the bore. 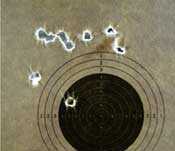 Crosman Premiers proved best of all.

Mac reported that the gun’s firing behavior became harsher as the testing progressed. It gave him the impression that it was delivering more power, but the chronograph proved otherwise.

As I said in the beginning, Mac conducted numerous tests mounting and remounting the scope and even mounting a different scope to get better accuracy. The groups shown here represent the best he was able to do at 30 yards.