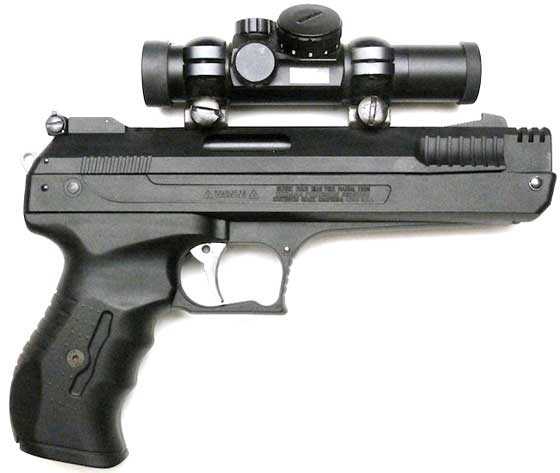 Mac tested his own P3 with a ProPoint red dot sight.

I’ve already tested and reported on a gun similar to this one. Back in 2006, I tested the Marksman 2004 — a carbon copy of the Beeman P3. At the time, I said it was a wonderful value in light of the price for a P3.

Well, the Marksman 2004 went away in 2006, and the Beeman P17 took its place. Same gun, different name. Still made in China, as opposed to the P3, which is made in Germany. This report looks at the genuine German-made P3.

The Beeman P3 is a single-stroke pneumatic single-shot pistol that performs like a target pistol. I will explain why I say that as we go through Mac’s test. The gun is made primarily of engineering plastic, which is the same stuff Glock frames are made of, so no wear-out and breakage fears. It’s an overlever design, where a top strap is lifted away from the frame and rotated forward to open the air reservoir and provide access for loading the pellet. When the top strap is returned to its starting position, the air is compressed in the reservoir.

P3 in the open position. (Photo from Pyramyd Air website) 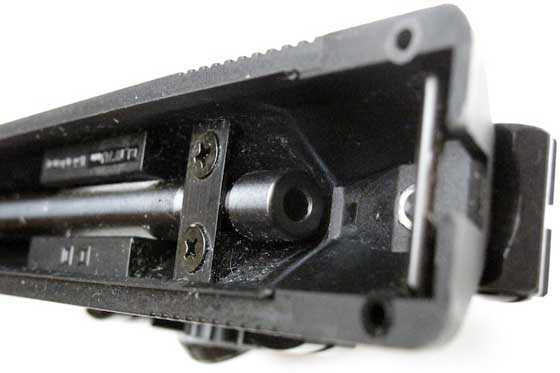 Pellet is placed into the breech when the barrel is exposed like this. Many feel this is clumsy.

How long can you wait before shooting after the gun is charged? Let’s call it five minutes, because the pump head is also the reservoir seal, and it isn’t strong enough to hold the compressed air for a long time. It has to flex to do its job, and that means it has to be made to give a little around the edges. So, five minutes max before you shoot. It’s best not to charge the gun unless you plan on shooting immediately.

The safety is automatic and sets when the pistol is cocked. It’s located on the left side of the frame which makes it impossible to operate with just one hand. 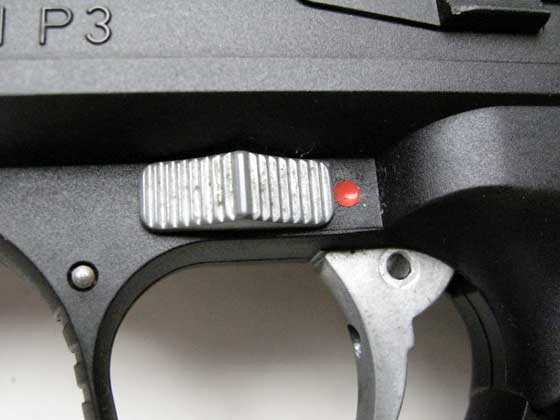 The safety is automatic and must be released before each shot.

The trigger is adjustable through an Allen screw set in the trigger. Mac reports the test pistol trigger breaks with 16 oz. of pressure and no creep or overtravel. That’s a lighter pull than would be legal on a 10-meter target pistol in competition. 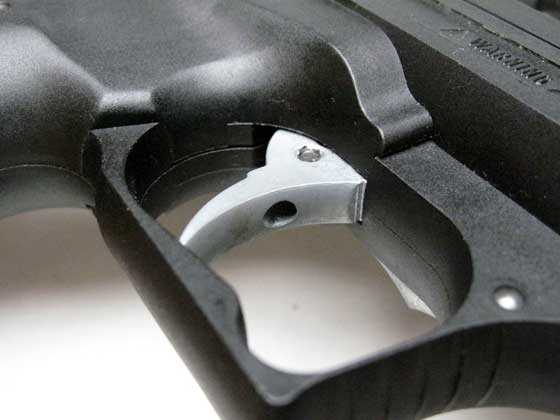 The trigger adjusts through the blade via an Allen screw. It’s crisp, light and breaks cleanly.

The plastic sights are very durable with repeatable adjustments. They also have a very sharp post and notch, so sighting is particularly easy. The front sight has a fiberoptic dot that can also be a solid black post with the right lighting. But Mac preferred to use a ProPoint red dot sight instead, and that was mounted on the 11mm dovetail that is on the top strap. 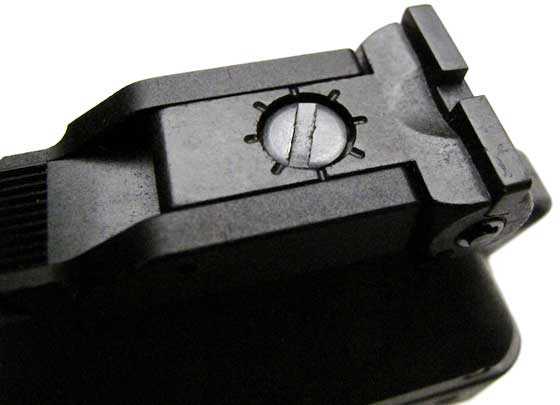 Mac’s pistol has approximately 1,000 rounds on it. That answers another question about longevity. The Marksman 2004 and P17 have sometimes had sealing issues with their compression reservoirs, but the P3 doesn’t seem to share them.