Today, guest blogger Pete Zimmerman continues his report on the C-20 pistol, as he shows us the technical side of his target gun.

Overall impression
The C-20 is a good sized gun. By catalog specs, it’s 16.5 inches (419.1mm) long, and weighs in at 2.5 lbs. (1150 grams). The grip looks much like a Morini competition grip, but old FWB parts lists say that it is not (at least not technically) from the Morini factory.

The palm shelf is held by two small Allen-head screws and is readily adjustable. Unfortunately, it’s not easily fixed precisely in place unless you have three hands — one to grip the pistol, one to hold the palm shelf in place against the gripping hand and a third to wield the wrench to tighten the Allen screws. (Thomas Rink’s custom grips have a patented palm shelf that can be adjusted with only one hand!)

Apparently, the C-20 was the first FWB pistol in which the angle of the grip is also adjustable. The two Allen screws that hold the grip together can be loosened to permit the grip angle to be changed through about a 10-deg. arc. This is a major improvement; without it my scores would suffer! 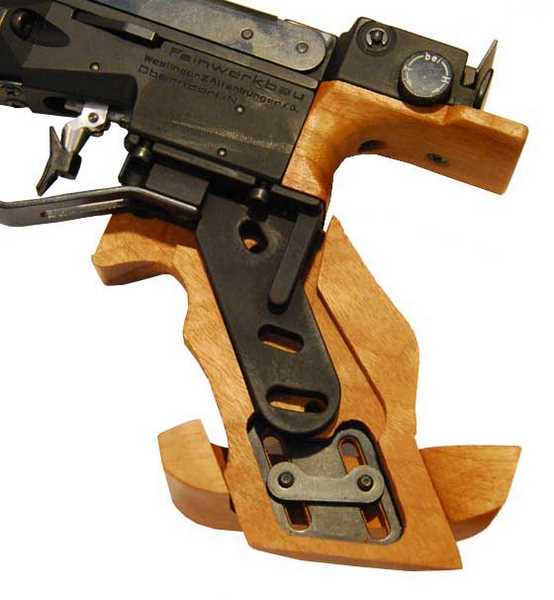 The inside of the C-20’s grip. Allen bolts through the two slots let the grip rotate approximately 10 deg. forward and backward to help the shooter get to a good rake angle. It’s crude, but it works.

The loading system is extremely easy. The shooter pulls up the charging cover until it reaches full stop. The breech is now open, the bolt retracted, the gas system charged and the trigger cocked. Between breech and bolt is a small channel — pellet-sized. The shooter simply puts a pellet in the channel and closes the cover. The bolt moves forward, and a small o-ring seals it in the breech. The gun is ready to fire. Remember…competition arms have no safety, so the weapon is live! There’s one other problem. You cannot see the pellet once it enters the breech, so it’s too easy to lose focus, load a second pellet, and then shoot both. This is not a good idea. I know from experience. 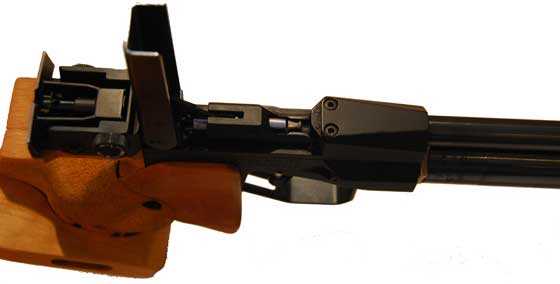 We’re looking at a pellet in the loading tray with the bolt behind it; the charging gate is open. The black o-ring on the bolt is the only seal that’s failed in the 16 or 17 years I’ve owned the gun. They’re not cheap but are readily available in the US. I got mine from Pilkington Competition.

Dry-firing is extremely easy to set up. After opening the breech and charging the system, simply push on the tab extending out from the left side of the action. The trigger can be pulled completely as if you were shooting a live round, but all that happens is a click when the sear disengages. To return to live fire, open the breech, cock the gun, push the tab in the other direction and close the breech. You can shift from live to dry firing while there’s a pellet in the bore!

Sights
The rear sight is fully adjustable for windage and elevation with click stops marked in the conventional European way. To move a shot that lands right of the target, turn the windage knob toward R (right or rechts). The rule of thumb is to turn the knob “into” the error. “Up” and “down” are marked as “H” and “T” for hoch and tief in German. The width of the notch on the rear sight is adjusted by putting a small Allen wrench through a whole in a shaft and then turning it until the desired size is reached. I haven’t been able to check how much backlash there is in the crucial micrometer screws, but I think it’s about one click. 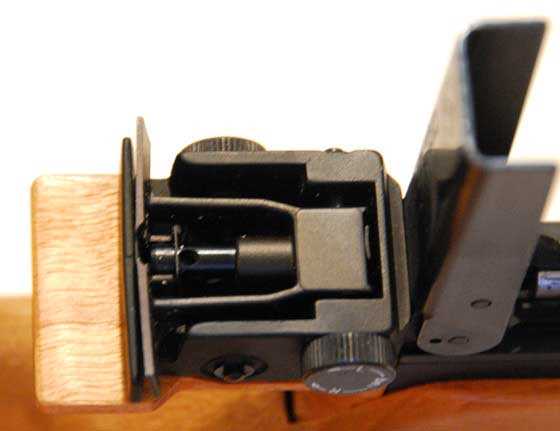 A good look at the very adjustable rear sight. The only adjustment not readily available is the depth of the notch.

The pistol is packaged with several front sight inserts of varying widths. For the first time on the C-20, FWB also milled in grooves on the barrel so the sight radius can be adjusted. Shortening the sight radius theoretically ought to reduce the precision of your aim, but it also tends to reduce small “adjustments” (lets call them correctly, the shakes!) in your hold, so for the moment I’ve moved the front sight to the shortest possible radius. The standard ISSF AP target is so big that the small reduction in aiming precision is negligible compared to the large improvement in apparent steadiness! I then chose a sight insert which appears from my shooting eye to be about the same width as the diameter of the bull. I then adjusted the notch width to have an apparent size twice that of the front sight. When I focus and concentrate, this consistently gets me 10-shot string scores between 82 and 90, mostly around 85. Your mileage, like mine, may differ.

The front sight has been moved backwards from its “standard” position near the front of the barrel. I might move it even farther back.

Trigger
Ah, the beautiful FWB trigger. It breaks with a snap as sharp as breaking the thin stem on a fine crystal wine glass. There is no sense of motion as the shooter applies pressure to the blade, until the gun fires. And, if it’s properly adjusted, the blade instantly hits the trigger stop, so that there’s no motion afterwards, either.

The trigger on the C-20 is very highly evolved from the ones on the C-2 and C-10. There are more adjustments, including first-stage length and weight, ratio between first and second stages, firing point and trigger stop. You can also loosen the large screw on the trigger shaft to rotate the trigger blade to any angle, left or right around the shaft, and can move the entire shaft to the right or left, forward and backward. Well, actually, if there’s anything on the entire pistol I really don’t like it’s the adjustment that allows the trigger blade to rotate on its shaft. It seems to me that I can never get it locked down so the blade angle doesn’t shift over 50 or 100 shots. It’s a constant battle between me, the trigger and the little multi-tool with screwdriver that comes with the gun.

I haven’t fired a C-2 or C-10, but the instruction manuals for both pistols are available online at the FWB site. The diagrams of the older generation triggers show simpler mechanisms with fewer adjustments. This may be a good thing, as making too many adjustments is a fast way for a shooter new to the weapon or the sport to get into really big trouble.

The manuals for any FWB gun ever made along with exploded parts diagrams and complete parts lists are readily available on the FWB site, which has both English and German versions. Choose on the home page.