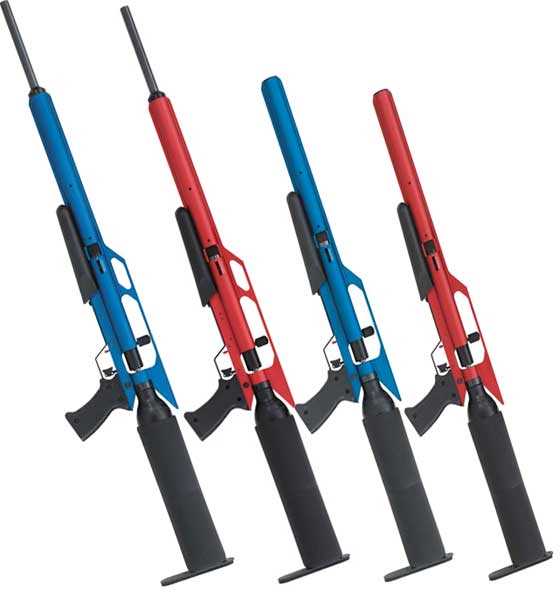 Announcement: Before we begin today’s report, here are some special products for you handymen. Pyramyd Air has removed the adjustable buttpads from broken stocks of some high-quality guns. They’re offering these pads for a fraction of what a new adjustable pad would cost. There are two styles. One with a flat face and one with a curved face. These are great for hobbyists who are skilled in woodworking. They’re not kits and do not come with instructions.

One thing I’ve tried to pass along in this blog is the importance of physics to an airgunner. If you’re a new airgunner, I suggest that you open your mind to several of the important physical relationships that dominate our hobby.

Barrel length and velocity
Barrel length affects velocity differently in each of the different powerplants. It is most important to a pneumatic gun and the relationship is this: the longer the barrel, the more time the compressed air has to push against the base of the pellet and the higher the velocity will be. That assumes a wide open valve for a long period of time. In the Daystate rifles with electronic firing systems, for example, the valve is closed quickly to conserve air. That gives them more shots at a given power level and reduces the muzzle report. By the time the pellet exits, the internal pressure has dropped quite low.

In a Quackenbush Long Action, the valve remains open longer and the gun is much louder and more powerful. Also, an extended barrel on a Quackenbush will increase velocity, while an extended barrel on a Daystate with the electronic firing system would do nothing. Of course, I’m talking apples and oranges here because the Quackenbush is a big bore and the Daystate is a smallbore, but the principle holds exactly as I’ve explained it.

Naturally, there’s a point of diminishing returns for every rifle; and, at some point, adding length won’t increase velocity in any pneumatic. Out to, perhaps, 30 inches for a smallbore of at least .22 caliber, it does hold true.

In a CO2 rifle, the point of diminishing returns is reached much sooner. I remember a while back where one of our readers discovered that about 16 inches was the optimum length for his Crosman CO2 rifle. A 24-inch barrel actually shot slower. CO2 is a large molecule and can’t expand as rapidly as air, so that probably affects the relationship.

In a spring-piston rifle, the optimum barrel length is between 6 and 11 inches, depending on the swept volume of the compression chamber. Compared to a pneumatic, a springer uses just a puff of compressed air and relies on the champagne-cork physics of the pellet absorbing air pressure almost elastically until it literally blows out of the breech.

But this relationship has become common knowledge over the past 20 years, ever since the Cardews made their tests, and as a result, hotrodders have been cutting their barrels back for more speed. This is largely counter-productive, because the pellet doesn’t really slow down that much when it runs out of acceleration. It has already engraved the rifling in the sides and lead is a material with an almost self-lubricating property, so the small amount of velocity gain is usually not worth the risk of a poor crowning job or cutting away a natural choke point.

So, the answer to how long a barrel should be for optimum velocity is: “It depends….” That’s a lesson for the newer airgunner.

Barrel length and accuracy
Are longer barrels more accurate? Well, if they are, someone needs to tell Feinwerkbau, the makers of the model 700 international competition target rifle. Because they only have a 16.73″ barrel in a rifle that competes at the Olympic level. The rest of what looks like the barrel is actually a hollow aluminum tube. Why do they do that? Because they know that the sights must be separated as far as the rules permit for more precise aiming, but the length of the barrel has no affect on accuracy.

Why don’t “they” make a full-auto CO2 gun?
Let’s face it, guns like the Drozd and the Steel Storm are just teasing us with burst fire. Sure they go full-auto, but only for up to six rounds. We want a gun that can keep on shooting till the barrel melts down.

One problem with that. The barrel never will melt down. Instead, it will freeze up. And, everyone who has ever tried to make a full-auto CO2 gun has encountered that barrier. I don’t own any full-auto CO2 guns, but I know that I can reduce the velocity of a semiauto by 100 f.p.s. and even more just by firing fast. So, imagine what a 900 rpm cyclic rate will do. I know of several projects to convert Crosman 600s into full-auto that failed for this reason.

Why don’t “they” make a solid, boattail pellet
This is going to be a combination of physical science and a philosophical discussion. New airgunners get wrapped up in the high velocity thing. It doesn’t take them very long to discover that the principal enemy of high velocity is the diabolo pellet. Then they either know or they find out that the boattail spitzer bullet is the most streamlined ballistic projectile around. Why not just make a boattail spitzer pellet?

Well, one problem is that most airguns haven’t got enough power to shoot a boattail bullet (let’s not call them pellets, because they really aren’t). No problem, they figure, we’ll just use an AirForce Condor — the most powerful smallbore air rifle around.

Okay, that would probably work. And, if it did, what would you have? A pellet gun that shot a 35-grain boattail spitzer bullet at around 1,000 f.p.s. There would be very little ballistic difference between it and a .22 long rifle cartridge. It would travel 1.5 miles and have the same inherent safety problems as the rimfire from things such as ricochets. Why not just buy a .17 HM2 and jump to the logical conclusion.

What I’m saying is that there’s very little advantage in turning a pellet rifle into a firearm, in my opinion.

“Oh yeah?” you counter. “Then, why are you always hyping big bores?”

I do it because they’re historically accurate and true to airgun history. They shoot slow, heavy bullets that do their job through kinetic energy, the same as they’ve done for several centuries. They’ve been around five times longer than today’s smallbores, so they do qualify as real airguns.

Turning a pellet rifle into a rimfire has very little attraction to me. I enjoy the safety that the diabolo shape (wasp waist, hollow tail, high drag) gives to airguns. When I really want to rock and roll, I shoot a .17 HM2 or a .22 Hornet that I treat with the same respect as any other firearm.

More grist for the mill
Speaking of the AirForce Condor, are you aware they’re now available in colors? Henry Ford eventually gave in to the demand for colored cars, and AirForce has now taken the same steps with their colored black rifles.

“Black rifle” is a slang term meaning paramilitary and military designs similar to the U.S. M-16. Until now, all AirForce sporting rifles have been finished black in keeping with that heritage. Now there are color choices. You can have a Condor in red or blue, and you can also have a Talon SS in red or blue. Perhaps, there will be additional color runs in the future, and perhaps even the Talon will someday be available in color.

AirForce Condor (left) and Talon SS in colors! What’s this world coming to?

189 thoughts on “Physical science and the airgunner”