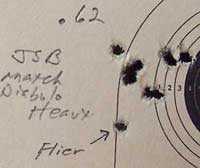 Today, the Feuerkraft gets a quality scope.

When Mac did the accuracy test of the RWS 350 Feuerkraft air rifle, he got mediocre groups with the open sights, but great groups with a peep sight. The rifle quickly killed the scope he had on hand, so we asked him to mount a different scope on the rifle and try again. This time it would be a good scope on good mounts.

Scope up!
We sent Mac a Hawke Eclipse SF 6-24x50AO scope. That’s a scope so good that nobody can complain about it. We also sent him a UTG scope base that has no droop, because 350s are known to not normally droop. To mount the scope, we sent a set of UTG 30mm quick-detatchable scope rings that allow you to move scopes from one gun to another rapidly without destroying the zero. Actually, Mac did a separate test of just the scope rings that has yet to be published. When you see it, you’ll see how nice they are. For now, though, I’ll tell you that he moved the scope from another rifle over to the 350 with absolutely no fuss and only a minute’s worth of work.

Best pellet?
Mac then researched Part 3 of the report and found that the JSB Exact 10.2-grain domes were the best pellets in this rifle. So, instead of wasting his time testing a long list of possible pellets, he confined the test to just this single pellet.

Best group
In fact, this is the best group we’ve gotten from this rifle. The previous best group measured 0.66 inches and was shot using a peep sight. I have to believe that we’re seeing the potential accuracy of this rifle at this point. Please remember that these are 10-shot groups, not 5-shot. As such, they’re about 40 percent larger than the best 5-shot groups will be. However, Mac was not done testing the rifle just yet. 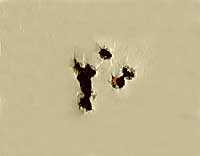 The group shot with peep sights was pretty good, too! It measures 0.66 inches and there were no fliers.

Another pellet
I had asked him to also try RWS Supermag pellets, which are heavy wadcutters. Remember that this is being shot at 30 yards, where wadcutter pellets don’t do so well. After 25 yards, wadcutters usually start to open up and cannot usually be counted on to deliver good accuracy. In this case, they did better than expected and gave some interesting insight into their performance. Let’s take a look at what they did. 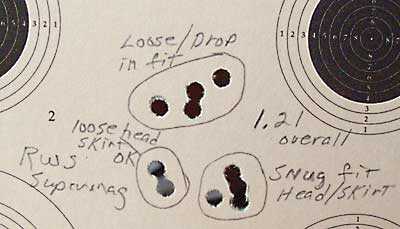 The heavy RWS Supermag wadcutters in the 350 Feuerkraft displayed some interesting groups. Mac recorded how each pellet felt when loaded, and they landed in these corresponding groups. The overall group measures 1.21 inches across, but you can clearly see three sub-groups within, and that’s where it gets interesting.

Mac was fascinated by how the Supermag pellets felt when he loaded them, so he kept track of each one in a 10-shot group. Some loaded loose and made a lot of powerplant racket when shot, while others loaded tight and shot smooth. Two had loose heads but tight skirts. They also shot smooth. Let’s look at the group and the subgroups they made at 30 yards. All ten shots in the following group were made with the same aim point, and each had the loading feel as indicated on the target.

The most interesting sub-group is the one with four shots at the lower right. Those were the pellets that fit the bore the tightest. I see an interesting correlation between this performance and what my Ballard rifle did at 100 yards, when shooting the largest, tightest bullets I had. As you may remember, in that test the group tightened up into the smallest one of four fired that day once I learned how best to use the rifle’s sights. In firearms that shoot lead bullets, the best performance is always with bullets sized .001 inches to .002 inches larger than the bore at its widest. I wonder if there’s a similar correlation with air rifles and pellets? Well, that’s something I’ll file away and check as I test other airguns.

Overall impressions
For starters, the RWS Diana 350 rifles are big, powerful spring rifles and shouldn’t be bought unless the buyer understands what that means. They’re hard to cock, the kick hard enough to bother cheaply made scopes and they require the best holding technique for good accuracy. Unfortunately, too many brand-new airgunners look at the velocity, alone, when making their choices without understanding what it means in the spring rifle.

On the other hand, if you’re an experienced spring gunner and want the power that this model offers, it’s one of the best. It holds like a classic 1903 Springfield rifle and rewards those who take the time to do things right.