Am I a gun collector? Not in the strictest sense. I do have a lot of guns, but I run through them fast — getting rid of the ones I’m no longer interested in and getting others that I’ve never had before. A couple guns, like the M1 Carbine, do fascinate me to the point that I’m attracted to every one of them. Even with that model, I’ve pared down the number I own to just one.

And I’ve always been this way. If you met me 40 years ago, I would just be a younger version of myself, and the guns I owned then were different from those I have today. I’m sentimental to a point, but my curiosity overcomes nostalgia when it comes to owning guns. And, because I have limited means, I have to own them sequentially rather than all at once.

Back in the salad years, I was questing after the guns that everyone wants — the Lugers, Colt SAAs and Winchester lever actions. And among all those wonderful guns I once owned, there was a Walther P38. The P38, which is short for Pistole (19)38 was designed in 1938 to use modern (at the time) production methods to build a sidearm that replaced the more complex and manufacturing-intensive P08 (Luger). The P38 was adopted by the German army in 9x19mm caliber, which is more commonly called the 9mm Luger.

I knew when I bought the gun that it wasn’t built the same as a Luger (which I would have to wait a few more years to acquire), and the actual pistol I could afford at the time had lots of wear on it. The accuracy wasn’t the absolute best — and that was at a time when I was shooting handguns all the time, so accuracy mattered a lot.

My impressions of the gun were that it was made differently than I’d expected. It was made of stamped parts, and the tolerances were on the loose side. Of course, my well-used gun was probably even looser than the norm, but I do remember being surprised at the rattle it made when shaken.

At the time, it was one of a very few semiautomatic pistols that were both single-action and double-action. So, you could carry it with a round in the chamber and just pull the trigger to start shooting. The Browning High Power (P35) was another one, but in those days I couldn’t come close to affording one of those. Over the years, they’ve come down in price as my purchasing power has risen, but I’ve still never owned one!

I was prepared for a horrible double-action trigger-pull from my weary P38, but even that well-worn example surprised me by being light and smooth. And the single-action pull was reasonable, if just a bit creepy. After all, this was a wartime sidearm that had seen a lifetime of field use and it was in about the same operating condition as any arms-room M1911A1, so a creepy trigger is to be expected.

This was my very first 9mm handgun, and the light recoil really came as a shock. After a childhood spent listening to stories of Lugers that shot through several people with a single bullet, I was expecting a real cannon; but as anyone who has shot the round knows, that simply is not the case. It has very little recoil for the power and is absolutely delightful to shoot.

The other thing that surprised me was how natural this pistol felt. It was replacing the Luger, which is the poster-child for an ergonomic handgun, yet the P38 did not disappoint when I brought it up to shoot.

The Walther P38 BB pistol
Now that I’ve told you my own backstory of P38 experience, let’s look at this Walther P38 CO2 BB pistol! For starters, this one is finished beautifully! Umarex has really gotten the finish of these replica guns down to a fine science, and this one is darkly blued. The metal is smooth and shiny and so good-looking that only the owner will know it isn’t a firearm.

The grips are brown plastic, designed to resemble wood, but they don’t quite make it. They are a little too reflective, though an effort has been made to dull them.

This is a BB pistol with a 20-shot drop-free stick magazine. It’s released by a lever located at the bottom rear of the grip frame, and the mag must be removed to pop off the left grip panel so you can install a CO2 cartridge. The tensioning screw for the cartridge is completely hidden within the grip so the gun’s profile is entirely authentic. In fact, there’s even a cleat at the bottom of the left grip panel for a lanyard hook — just like on the firearm!

The safety is a switch on the upper left rear of the slide. Up makes the gun ready to fire and down makes it safe, but you need to push the lever all the way down until a click is felt. If you don’t, the gun is not on safe and will fire when the trigger is pulled. The safety looks like the kind that also de-cocks the hammer, but this one doesn’t do that.

The one thing I wish was different is that this P38 doesn’t have a double-action trigger. The hammer must be manually cocked to prepare the gun for firing the first shot. After that, blowback cocks the hammer for each successive shot, so you have a true semiautomatic pistol. The blowback is brisk, though the mass of the slide is low, and you can definitely feel the shot going off. After the last BB has left the muzzle, the slide stays back so you know it’s time to reload.

The slide is held in place by the slide release, which is a working lever on the left side of the gun, just above the trigger. Reload the magazine, slip it back in the gun and push the lever down to let the slide go forward. 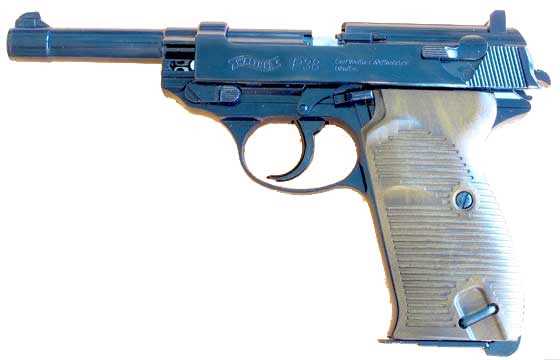 When the last BB’s fired, the slide stays open like this, alerting the shooter that the pistol needs to be reloaded. The slide release is a lever just above the trigger that’s pushed down to release the slide.

The magazine could be easier to load. To load it, you retract the spring-loaded follower and lock it in position, then feed each BB through the same hole they are fired from at the top of the magazine. Most stick magazines have a enlarged cutout in the follower channel that assists the loading of BBs, but this one doesn’t have that.

On the other hand, there is a loading groove where the BBs enter the mag, and the hole they drop into is slightly funnel-shaped. I guess I should reserve my comments on loading until after I’ve done it a few times.

The sights are fixed, both front and rear. They’re sharp and easy to see, and we’ll learn how close the gun shoots to the point of aim in the accuracy test.

The test pistol weighs 2 lbs. with a CO2 cartridge installed but no BBs in the magazine. That’s slightly heavier than the most common P38 firearm that has an aluminum frame and even heavier than the steel-frame early gun. But it isn’t a heavy handgun. It feels just right to me. The grip is neither too wide nor too narrow for me. Since the firearm has a single-stack 8-round mag, the width of the grip can be controlled by the thickness of the grip panels.

This will be a fun test for us. I just hope it’s as accurate as it looks! 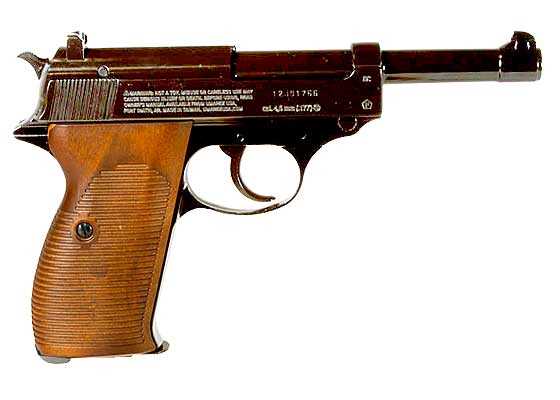