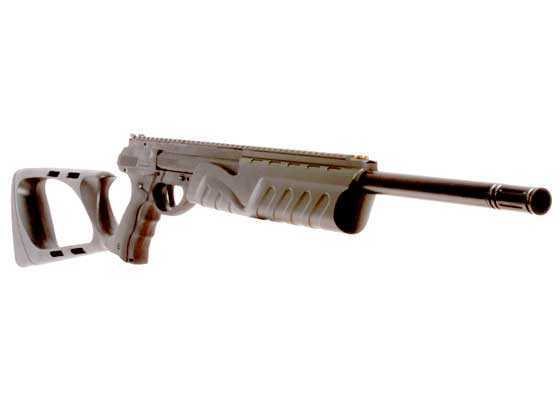 Today, you’ll get a twofer — thanks to blog reader Les, who asked about adjusting dot sights and lasers. I said I would test the Umarex MORPH 3X with a dot sight, so I thought I’d combine that test with instructions on how to adjust the sight to hit the point of impact.

I hadn’t considered testing a laser on the Morph, but I can certainly describe how to do it. I’ll get to that at the end of the report.

The dot sight
What is a dot sight? Well, once you understand what it is, you’ll understand that adjusting one is the same as adjusting a scope. Because that is what a dot sight is — a scope without the magnification (usually) or the crosshairs!

On scopes, the crosshairs or reticle are lines that you see through to see the target. By adjusting where the lines are, you can adjust where your shot strikes the target. I think most folks understand that.

The glowing dot is different than the crosshairs because it isn’t a solid object. It’s a reflection on the surface of a lens that appears in your line of sight. You can see it because the reflection is physically there, but it isn’t anything that can be touched, anymore than you can touch an image in a mirror. But you can adjust where the dot is seen by adjusting the lens that reflects it.

Try this
If you have a dot sight, try looking through it and moving your head around from side to side and up and down. You’ll note that the dot moves against the target quite a bit. That’s because you’re moving your eye, and that changes where the reflection of the dot appears to be. You can do the same thing with the reticle of a scope, but not to the same extent. Where a scope reticle will appear to move just a little against a target, a dot appears to move more. That’s the difference between looking at something that is physically there and something that’s just reflected off a curved piece of glass.

That should warn you that dot sights have a lot of parallax problems and require consistent eye placement for every shot. The same is true with open sights, but open sights give cues when the alignment isn’t right. The front sight moves relative to the rear sight. But a dot sight is just a single point of reference, so you can’t see the misalignment as easily. Therefore, the placement of your head is extremely important if you expect to hit the target every time.

What I’m saying about dot sights applies to the older tube-type sights, like the one I’m using in this test. I suspect, like all technologies, dot sights have become more precise in recent years. But my experience is with the older style.

Don’t get the idea that dot sights are impossible, though, because they’re not. Though they are somewhat dicey to use. It’s not as bad as ice skating on stilts.

Dot sight adjustment
Now that you understand what a dot sight is, you should know that it adjusts in the same way as a conventional scope. One knob controls the up and down movement, and the other controls the left and right. Sighting-in a dot sight is no different than sighting-in a scope. You select a point of aim, which you hope will also be the point of impact and hold on it as you shoot. If the pellets strike the target low and to the left, the sight has to be adjusted up and to the right.

Like a scope, it helps to begin sight-in of a dot sight at a close target. I like starting at 10 feet away, and I adjust the sight until the pellet is striking the target on the centerline and as far below the point of aim as the center of the sight is above the center of the bore. Then, I know I can back up to 10 meters, and I’ll be on paper. I may need to refine my sight adjustment a little when I shoot at 10 meters, but this is the fastest way I know to sight in an airgun — especially one that cannot be boresighted.

But what if you’re at a public range and can’t shoot at 10 feet? That’s when I put up a 2-foot by 4-foot light-colored paper backer and staple my target in the center of that. Even at 50 yards, there’s a good chance my shots will land somewhere on that big piece of paper if I shoot at the center of the target. When even that fails, I enlist the help of a spotter to watch the berm. I shoot at a dirt clod we can both identify and he watches through the binoculars that I always carry to see where my bullet strikes relative to the dirt clod.

Tasco Pro Point
I mounted a Tasco Pro Point dot sight to the rail on top of the Morph and was ready to commence sight-in. The Pro Point is a dated design, but it was good quality 15 years ago and still works well today. The amount of parallax is small for a dot sight, but I still watch my head placement every time.

It was very easy to install the Pro Point on the Morph. The Weaver bases on the Pro Point clamp right to the Morph’s rail, and clamping pressure plus the keyed cross-slots hold the sight in place. 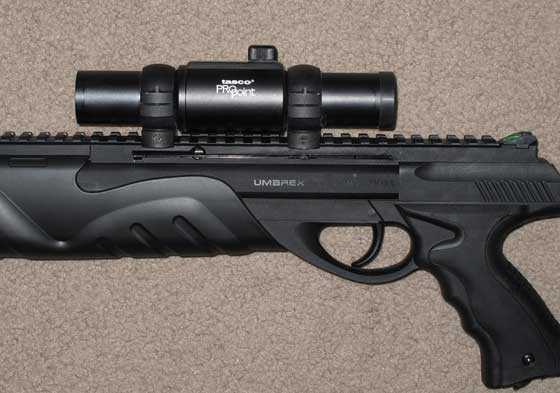 Target setup
I think it was Victor who asked me how I stop the BBs from bouncing back, so today I thought I’d show you. I photographed my target setup, so you can see the light and the Winchester Airgun Target Cube with the Shoot-N-C target pasted on its front. 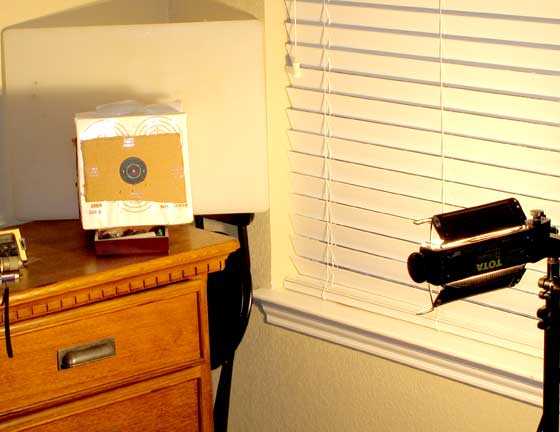 This is my target setup in the bedroom. The target cube is backed by a thick plastic cutting board, so nothing will hit the wall. The light is a 500-watt quartz incandescent camera light.

Absolutely no BBs bounce back using this setup. The target cube is starting to slough off small pieces of styrofoam, now that over a thousand shots have hit it, but nothing gets through it and nothing bounces back.

On to the shooting
At first, I shot the Morph in carbine form offhand at 15 feet (I’m using Umarex Precision steel BBs). I dialed the red dot intensity up to No. 8; because when the Shoot-N-C target turns green, it’s so bright that it masks the dot. Even at the 8 setting, I could barely see the dot against the target, once it changed from black to green (or yellow — I can’t tell…I’m colorblind.). Of course, when you shoot offhand, the dot seems to move all over the target — even at 15 feet. 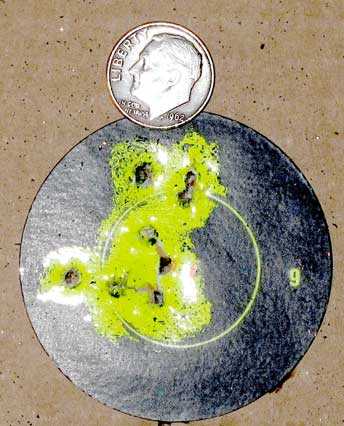 Ten shots offhand from 15 feet with the Morph carbine. That’s not too bad! Yes, I used flash.

Seeing the accuracy of the carbine made me want to shoot the gun rested. I brought in a kitchen chair, turned it around and used the back as a rest for my next group. 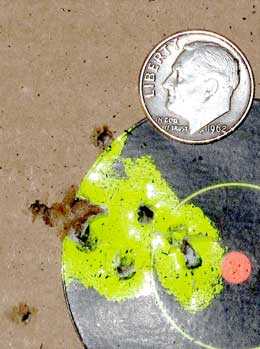 Ten shots rested from 15 feet. Obviously, the gun is shooting to the left — something that shooting offhand did not fully reveal. All the shots in the cardboard are part of this string.

Seeing this result made me want to see just how good the gun could shoot. So I adjusted the dot to the right and shot another 10 rounds. 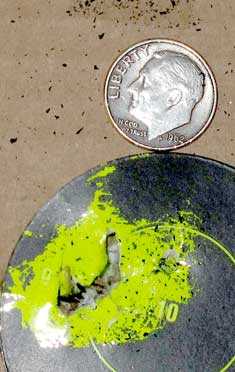 Wow! The sight adjustment didn’t go far enough, but look at how small this group of 10 shots is! The Morph can shoot!

Let’s back up
Seeing how good the Morph could do at 15 feet prompted me to back up to 25 feet and try again. This was also a rested group of 10 shots. I adjusted the sight a little more to the right for this one.

I was running out of the smaller bulls, but with a dot sight that poses no problem. Since the BB goes where the dot is, the size of the target has no influence over where you hit, as it would with a peep sight or a post and notch using a 6 o’clock hold. 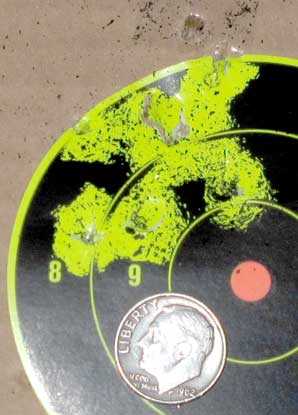 At 25 feet the group opened up a bit, but it’s still respectable. There’s a single BB above the bull in the cardboard. This is a larger bull; but with a dot sight, that doesn’t pose a problem. The sight is still not far enough to the right, and notice that the impact point has climbed just a little. The orange dot in the center of the bull was the aim point.

A laser
I don’t have a laser that will fit on the Picatinny rail of the Morph, so I can’t mount one, but let’s talk about how a laser differs from a dot sight and a scope. A laser actually shines a light on the target. What you see is reflected from the target — not from a lens inside an optical device. The laser dot can be seen by everyone — not just by the shooter — the way a dot sight can. And because the laser dot actually hits the target, there can never be any parallax. What you see is actually there, on the target.

With a laser, there’s nothing to look through. Think of a laser as a very powerful flashlight. It isn’t actually a sight. It’s more of a designator.

A laser is adjusted just like a scope or dot sight, except you’re adjusting where the light actually falls. So, the procedure is to use a separate sight to sight-in the gun, then adjust the laser so it’s on the target when the other sight is.

Adjusting a laser is usually different than adjusting a scope or a dot sight. There aren’t click adjustments, as a rule, but there are screws that push the laser tube in the direction you want it to go. This may be backwards of how a scope’s adjustments move, so read the laser’s manual before you start adjusting.

Distance is limited
Lasers can’t be seen very far on bright days, so they’re limited in distance. You can look at them through a scope which increases the distance at which the dot can be seen, but even then the laser is a limited-range sighting aid. A 50-yard shot is very far for a laser. Most shooters set them up for very close shots, like 20-30 feet. They use their other sights for longer distances.

Les — I hope this helps you with the sight-in procedure for dot sights and lasers. Let me know if you have more questions.

Final evaluation
The Morph 3X rifle and pistol is a unique airgun that’s accurate and powerful at the same time. The double-action trigger-pull may take getting used to, but it poses no problem as far as accuracy goes.

I find the Morph accurate, conservative of gas and trouble-free to operate. If you want an accurate BB gun that also has power, check this one out.