This is the start of a long exploration into the use of swaged bullets in both firearms and airguns. I told blog reader Robert of Arcade 2 days ago that I was about to start this one because he was talking about wanting to use the larger smallbore calibers (.22 and .25 calibers) and smaller big bore calibers (.257 and .308) to hunt larger game. But to do that, we need bullets (and pellets) that are accurate.

This report has been nearly one entire year in development, but you’re just hearing about it for the first time today. It all began with my Nelson Lewis combination gun that I have written about many times. Back in the first part of that report, I showed you some original bullet swages that came with the gun. The problem I have with these swages is their design. The bullet is swaged into the die, but then has to be tapped back out of that one-piece die, which is very inconvenient. It would be easier to get out if the die had a separate nose punch that could be taken off the die and the bullet tapped on through. 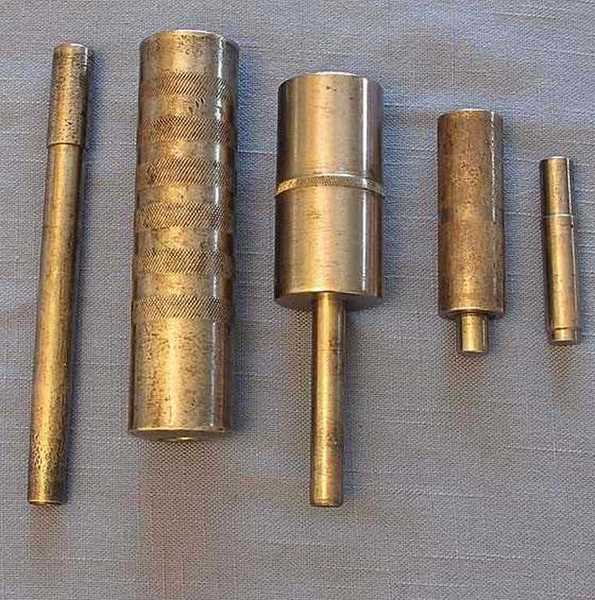 These dies came with the Nelson Lewis combination gun I acquired.

Last year at the Roanoke Airgun Expo, I saw that airgunner Mike Reames was making swages for some of his big bore CO2 guns, and people were using them with great success. I talked to Mike at some length about these swages and decided that I wanted to try a swaged bullet in my Nelson Lewis gun. But I conducted a proof of concept test with the rifle — to see if I got the bullet size correct . Unfortunately, I shot what proved to be an overload in the gun. It was a 250-grain .379-caliber bullet, where the weight of the round ball I usually shoot is just 80 grains. The pressure created by the heavy bullet blew the percussion cap nipple off the rifle, and I had to get it repaired. That shut down the experiment for a long time.

I know the barrel diameter of this rifle quite well, so I again started talking to Mike about a swage set. What I was after was a bullet that would slide over the tops of the lands of the rifling and easily slip into the bore. I reckoned that the force of the exploding black powder would expand the base to both seal it against gas loss and also take the rifling. The bullet I want to make is like a Minie ball that’s swaged instead of cast. If this is of interest to you, email Mike for more info.

What is swaging?
Swaging means to form something in a die by pressure alone. It sounds high-falutin’ but it’s as simple as hammering a nail. And it doesn’t take as much force to swage a small caliber bullet as it does to hammer a small, common 6-penny nail.

My swage set arrived and consists of 4 pieces: nose punch, die body, spacer and swage punch…which works on the other end of the bullet. I asked Mike for a swage to make bullets that measure 0.316 inches on the outside, and the two samples he sent with the swage set measure exactly that size. I was now in business to make swaged bullets! 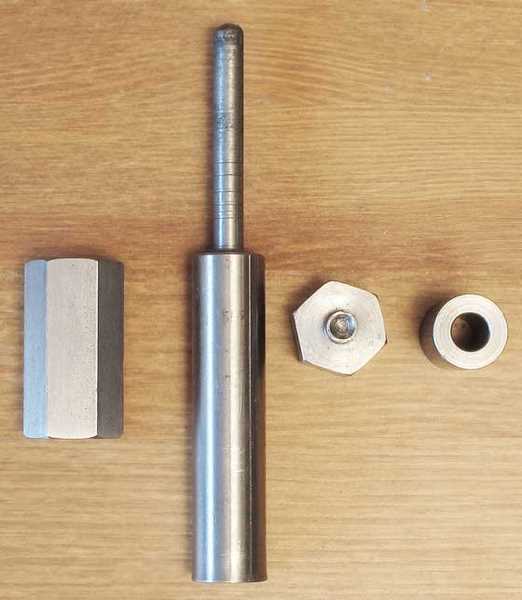 Here are the 4 parts that came with my swage set. From the left, they are the swage die, swage punch, nose punch that goes in the small end of the swage die and the spacer.

The swage is put together as it is used. I left out the spacer because I don’t use it. I control the swage by controlling the force of the one hammer blow used to make the bullet. The results turn out very uniform that way.

I started by swaging some of the 0.310-inch round balls I’ve been shooting as patched balls in the rifle. The rifle is .32 caliber and the lands are about 0.316 to 0.317 inches apart. The round balls weigh only 45 grains, so the bullet they make is very short. The swage puts a concave hollow into the base of the bullet, which helps the lead base expand when the black powder explodes. The nose is slightly rounded but still has a sharp shoulder to cut a nice hole on paper. 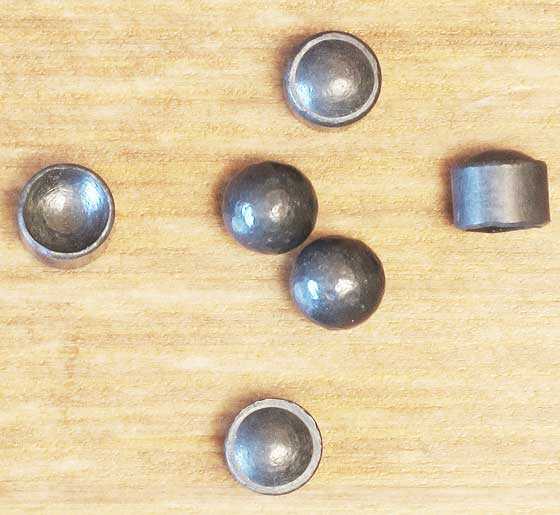 The .310 lead balls in the center were put into the swage die, which was resting on the nose punch. Then, the swage punch was inserted in the die and struck one time. The strike was not as hard as hammering a common nail, yet produced uniform bullets. At the top and bottom, they’re standing up. The right one is laying on its side, and on the left one is standing on its nose to show all parts of the finished bullet.

Because I control the weight of the bullet I make by what I put into the swage, I also swaged some .32-caliber lead bullets that weigh 88 grains. They make a much longer bullet that may be more useful for hunting game up to the size of javelina and coyote. The smaller bullets would be okay for squirrels and up to turkeys. Of course, this all comes down to how accurate these bullets are, so I’ll need a good day on the range to find that out. I’m looking for faster, easier loading than patched balls and better accuracy. That’s hoping for a lot, but that’s what this is all about. 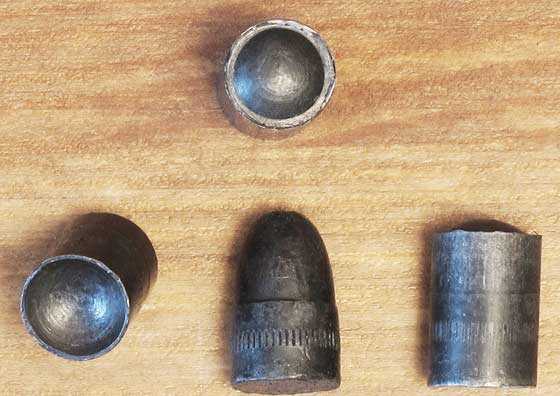 Why swage a perfectly good lead bullet?
Looking at the last picture you have to ask why I would bother to swage a perfectly good lead bullet like that. Why not just shoot it as it is? Well, the answer is that it’s not a good bullet for the rifle I’m shooting. It has a body diameter of 0.314 inches, which is too small for the bore. The swage enlarges it to 0.316 inches. The finished bullet looks just as long as the one that was unswaged. The concave base of the swaged bullet is where the lead came from to make the cylindrical bullet longer.

I actually went to the range last week for the first test, but I’d used the swage die backwards and got bullets that are far too large for the gun. The swage die is made like a funnel, where fat bullets enter the top and 0.316-inch bullets come out the bottom. That is, if you use it the right way. Since I turned the swaging die around, what I got turned out to be bullets that are far too big for the bore of the rifle. 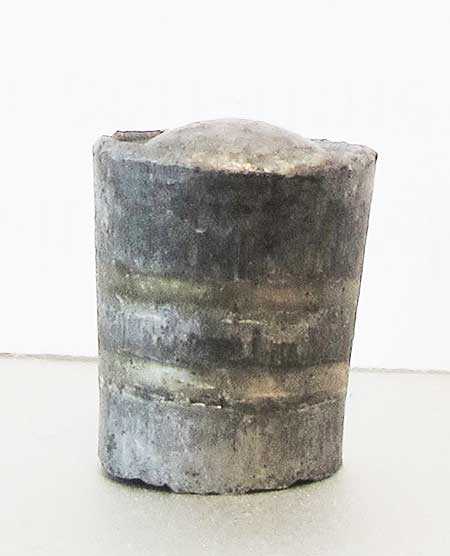 This is what happens when you swage the bullet in the wrong end of the die. The entrance to the die is shaped like a funnel to admit slightly larger chunks of lead to be swaged into smaller bullets. So, the bullet is tapered like this and far too large to enter the bore.

I emailed Mike, telling him I got the dimensions wrong and we started planning what to do about it. That’s when I looked closer at the bullets I’d made and discovered my mistake. I quickly swaged a couple more bullets with the die in the correct direction, and they all turned out exactly 0.316 inches in diameter. Mike was glad, I was happy and I had yet another story to share of how not to do something. The good news is that I can run all the big bullets through the die a second time, and they’ll come out right.

The bullets made the right way will slide down the clean barrel of my muzzleloader in about a second. Right now that seems good to me, but it’ll take a successful range test to know if I’m right.

How difficult is it to swage a bullet?
If you can hammer a nail, you can swage a lead bullet with a die set like this. This is the way accurate rifle bullets have been made for more than 150 years, and it’s dirt-simple. There are no copper jackets to swage the lead cores into, so I’m not talking about a process that requires hundreds of dollars worth of dies and a special press. All you need is a hammer and some lead of the appropriate size. If you wanted to make a .22 pellet by swaging, for example, you could use a 15.43-grain Gamo round lead ball. The weight would be right for a .22 pellet as would the diameter of the ball. What you would be doing is changing the shape of the projectile from spherical to an elongated cylinder.

What you cannot do is use more than one piece of lead to make a bullet. If you do, the pieces will all conform to each other inside the die and fall apart the moment they are out. So, forget any ideas of adding pieces of lead to increase bullet weight.

Mike will make a set like the one seen here for $85. If you aren’t a machinist, this is well worth the price.

The best bullet
Every caliber bullet has a range of weights that will work. Too little lead, and the bullet is shorter than it is wide and subject to be unstable. Too much lead, and it becomes too long — again, subject to being unstable. The faster it’s driven (velocity), the faster it spins (rifling twist rate), which stabilizes longer bullets (to a point). Part of the test I’m doing is to determine what length bullet works best in my rifle. Since length also means weight, we talk about a certain caliber bullet by its weight more often than its length.

Of course, accuracy means a lot in what I’m doing. I’ll be looking for the most accurate bullet I can make. I may have to balance the bullet weight against the powder charge, for reasons of stability explained above.

The goal
I’m doing this to see if there’s any future to it. If there is, then I want to make an accurate bullet for the Nelson Lewis combination gun. That was always the goal. But now that I’ve listened to Robert from Arcade, I think this needs to be tried for airguns, as well. I’m thinking a very powerful airgun and a pellet/bullet that I can make myself. 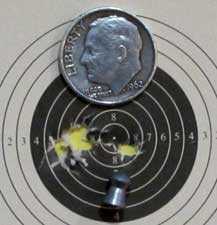 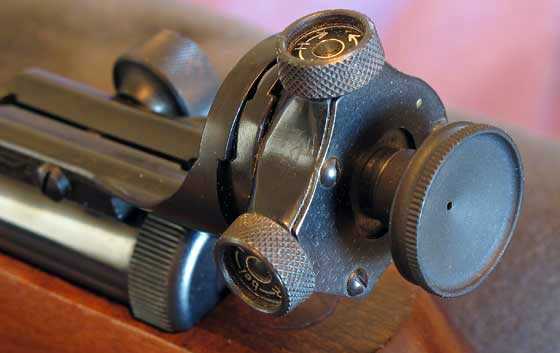