The velocity is controlled by a screw that impedes the airflow through the transfer port. The screw enters the port from the underside and goes across the port, blocking a percentage of the air that’s trying to flow through. Since the valve is open only for a short time, this blockage is effective. We’ll see how effective today. First, though, we need to know where the rifle is now. 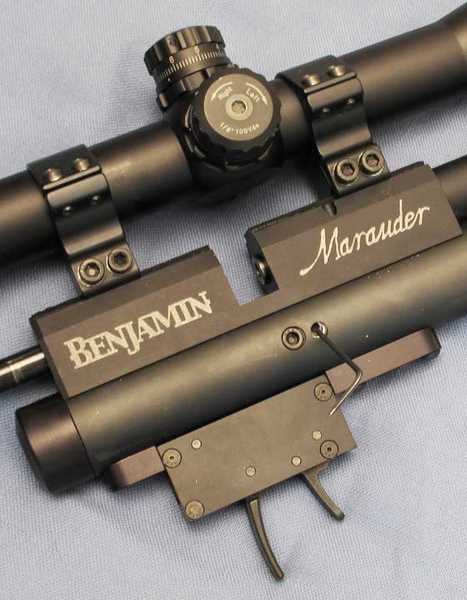 The power adjustment screw is located on the right side of the pressure tube ahead of the trigger. 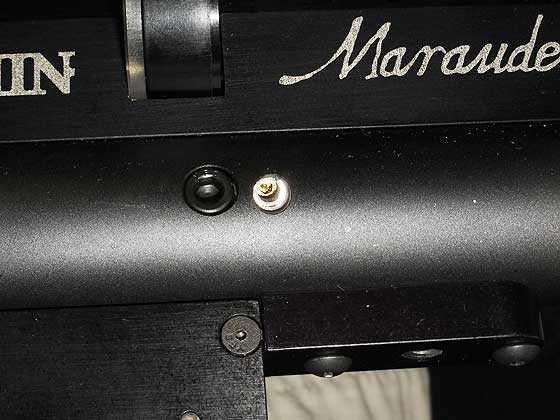 The power adjustment screw is deep inside a threaded hole — beneath a locking screw of the same size. 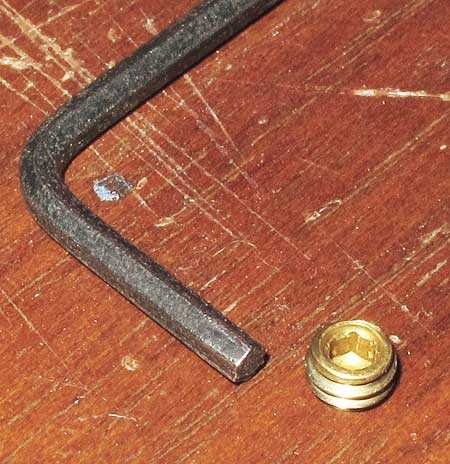 The locking screw is a small headless Allen screw.

I filled the rifle to 3,000 psi and started shooting Crosman Premier 7.9-grain pellets. We already know how accurate they are in this rifle, now let’s see how many good shots I get from a fill. 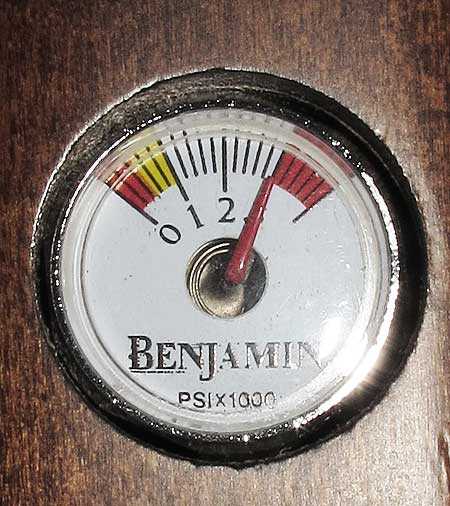 When the carbon fiber tank gauge read 3,000 psi, this is what the Marauder gauge looked like. That’s pretty close!

I rate this as 31 good shots because I’m accepting a 30 f.p.s. velocity spread. Since the high was 1029 f.p.s., the low would be 999 f.p.s. You can set this up any way you like, but you do see that the gun is definitely declining in velocity after the 31st shot. I would say the gun has 3 good magazines on a 3,000 psi fill with this setting.

Crosman advises in the owner’s manual to turn the power adjustment screw all the way in (clockwise) until it stops and to record just how many turns it took. Then, you’ll know where the gun was when you began; and if you ever want to return to that power, you can.

My rifle had 2-1/3 turns on the adjustment screw, as it was set. I left it all the way down, which is as restricted as it gets, and I filled the rifle to 3,000 once more. Next, I started firing the rifle and adjusting the screw after every 2 shots, while recording the velocity with the same Premier pellets.

That was where I wanted to be, so I stopped adjusting. I locking down the screw on the adjustment screw and put the barreled action back in the stock. Then, I filled to reservoir to 3,000 psi and started shooting another string.

Using a velocity variation of 30 f.p.s., the same as for the first string, the fastest shot went 898 f.p.s., so the slowest acceptable shot went 868 f.p.s. There are a total of 45 good shots in this string by that criteria.

But notice that the first 2 shots were slightly below the acceptable range. That’s because 3,000 psi doesn’t work perfectly with this velocity. This is an example of how the fill pressure can also change with the velocity you select. So, the power screw adjustment shown in this report is not independent of the fill-pressure adjustments. It worked out so close this time that we can overlook the 2 slow shots at the beginning of the string; but if you try for a lower velocity average, that will probably change.

This test also gives a good sense of how the velocity average affects the total number of available shots. We went from 31 to 45 good shots by clipping a little more than 100 f.p.s. off the average velocity we would accept. And when you look at the average we’re now getting, which is somewhere around 886 f.p.s., you see that we still have a lot of velocity for serious work such as hunting. The question becomes: Which would you rather have…3 magazines of shots per fill or 5?

Noise
As long as the velocity was down below 750 f.p.s., the rifle was incredibly quiet. After it got above that number, it didn’t seem to change much between 750 and 1,000 f.p.s.

Summary
It was very straightforward to adjust the Marauder’s power, as you can see. The stock does have to come off, but it isn’t hard to do. Once you’re done, it goes back on just as easily. This isn’t a rifle that invites constant velocity adjustment. You set it and forget it, so the stock removal poses no real problem. 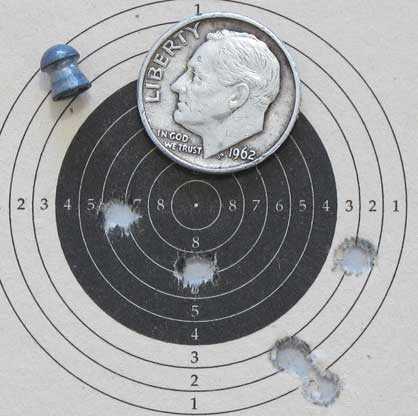 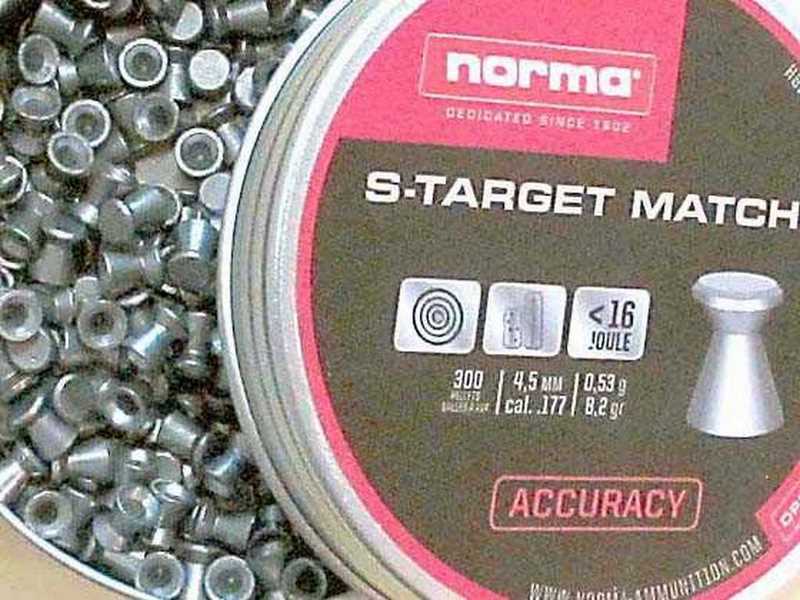