As the days passed after asking his question, Richard eventually figured it out on his own and now knows what to do, but today’s report is for all those who haven’t figured it out yet, as well as for those who have held off buying a precharged airgun because they feel there’s so much they don’t understand.

More power!
At the Roanoke airgun show last weekend, I talked to a shooter who claimed he pumped and pumped his old Sheridan until it cracked like a .22. Now, I know that’s impossible and I’ll tell you why.

The pressure generated by exploding gunpowder gets directly behind the bullet and pushes it. More pressure equals higher velocity — within reason. There’s nothing in the way of the expanding gas to prevent it from pushing on the bullet.

In a pneumatic gun, however, there’s a valve. That valve has to open before any of the pressurized air can get behind the pellet. If the air pressure is too high for the valve to open, it doesn’t matter how much pressure there is — the pellet is going nowhere. That’s the difference between a firearm and a pneumatic airgun. So, pumping or pressurizing a pneumatic rifle beyond its design limit doesn’t increase the velocity — it slows it down and eventually stops it altogether.

Therefore, Richard was asking how he was supposed to know the max fill pressure of his gun so it would operate correctly. He wondered that because of conflicting information from Crosman, my blog and probably from other sources on the internet. The fact that the Marauder lets you adjust the maximum fill pressure just made this more confusing for him, and I can see why.

He asked me how he was supposed to figure out the max fill pressure and at what pressure he should stop shooting — the starting and ending fill pressures. There are several ways to find this out. The easiest way is to use a chronograph. To do this, you fill to a given pressure — say 3,000 psi — and start shooting through the chronograph. If the velocity of the pellets continues to rise as shots are fired, the valve isn’t opening all the way; and you know that 3,000 psi is too high for a starting fill pressure.

As you continue to shoot, the velocity will stabilize at some point. When it does, you know that the valve is now opening all the way on each shot. Of course, you will have shot several shots past this point before you recognize it, but usually it will be a very little pressure above what remains in the gun when you notice it. So, fill the reservoir again and watch the needle on your fill gauge. When it stops rising fast (if you’re using a scuba tank) and starts rising more slowly, you’ve opened the inlet valve of the gun’s reservoir and are now adding air to the reservoir. Add just a few hundred pounds of air by watching the gauge on your tank, then shut off  the valve and note the pressure at which you stopped. Maybe it will be 2,600 psi. If the gun fires as fast as it did before, you know that the max fill pressure for your gun is at least 2,600 psi or maybe a bit more. Refine this by iterating the process.

The following graphic shows the relationship between pressure and velocity as I have described it here. 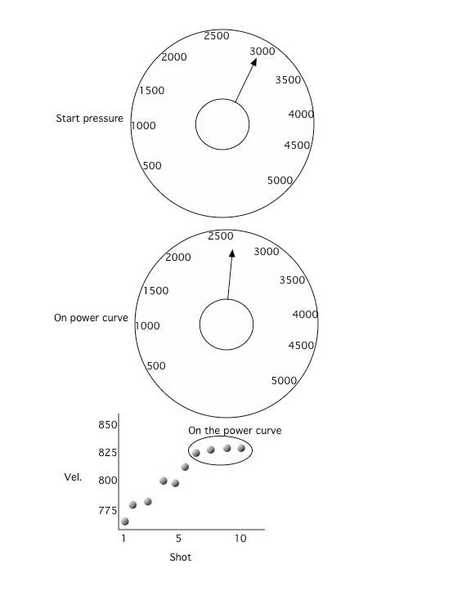 What if you don’t own a chronograph? This may be Richard’s dilemma. Is there any way he can figure out the max fill pressure and where to stop shooting?

Of course there is. Airgunners a hundred years ago didn’t have chronographs, yet they did fine by watching what their guns would do. If they wanted to know how powerful their guns were, they shot them at an anvil and looked at the lead splat. If they wanted to know when to stop shooting, they watched the guns and when stopped when they could see the bullets coming out of the barrel. They filled their guns until they couldn’t pump anymore, so max fill pressure was taken care of.

But Richard shoots a gun that’s much faster than a 100-year-old pneumatic. His pellets don’t make splats — they disintegrate! And he fills his rifle to a much higher pressure from either a scuba tank that gives him very little feedback or a triple-stage hand pump that doesn’t have much more feedback.

How does he know when to stop filling and when to refill the gun? Simple, he watches his target and sees where his pellets land.

Let’s take an example and have Richard fill to 3,000 psi, then shoot at a bullseye 35 yards away. If the pellets are climbing while he aims at the same aim point every time — making a vertical group, Richard knows the velocity isn’t stable. He doesn’t know what the numbers are — just that they aren’t stable.

Then, when the rifle starts grouping all the shots together, he knows the velocity has stabilized. Like before, by the time he notices this, he will have shot past the optimum starting fill pressure; but he can always fill to a few hundred psi more than the gun has in it at the point he notices, and eventually he’ll find the optimum fill pressure. The graphic below illustrates this. 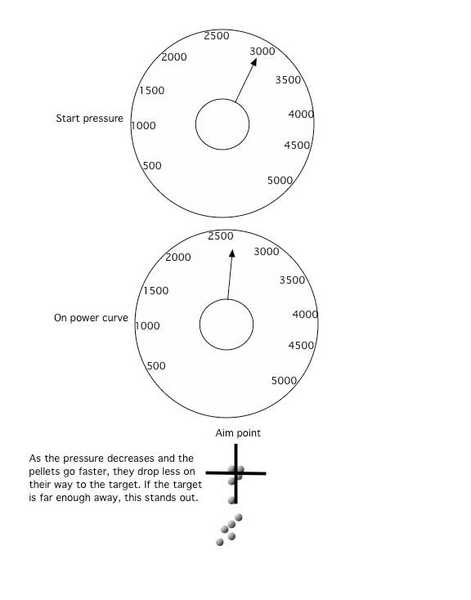 Finding the stopping pressure is just the reverse of this. Shoot until the pellets start wandering on the target, again (usually dropping down, again, but sometimes just wandering to one side or the other). Then, you can start filling the gun, and the ending pressure will be a few hundred psi above where the gun begins to accept pressure. From now on, you’ll know approximately how many shots or magazines you can get from a fill; or, if there’s a gauge on your airgun, you’ll know when it’s dropped off the power curve.

You don’t know until you know. You know?
You can read about this all day long and never understand it. This is something you must experience firsthand — as in shoot a PCP and watch it happen. The first time you see it, you’ll understand…and forevermore you’ll wonder why others have so much trouble understanding how precharged airguns work.