• Light
• Got Photoshop?
• The lesson
• Lesson two
• What have we learned?

We have many new readers who aren’t familiar with what I’ve written in the past. Six years ago, I did a 5-part series on photographing airguns. I tried to cover some fundamentals, and several readers said they got something from it; but so much time has elapsed since then that all but the real veterans have forgotten that I wrote it.

I promised some newer readers hat I would write a few more reports on photographing airguns several weeks ago. This is the first of them, and today we’ll talk about light. In fact, we may need more than one report on this subject since light is so crucial to good (and bad) photography. This is a reiteration of what was in that old series, but I’m trying to say it differently, today. I’ll also share some different tricks I use.

I’m going to keep the discussion simple and oriented on results. But you have to do your part if you want to get something from this.

Light
Light is how an image is recorded. In the days of film, light would cause a chemical change on film. Today, the same thing is done electronically, but the results are essentially the same. For some reason, most of what you think you know about how light works turns out to be wrong and backwards, which is why your photographs may turn out bad.

To see an image, the image needs to be lit so it can be recorded. Most folks think that they have to contrast the image and background by making the background as light as possible to get the image to jump out at them. In fact, you want to do just the opposite. Allow me to illustrate with some photos.

The first picture is a classic dark subject against a white background. It’s the loading tap of the BSA Stutzen you saw yesterday. I’m telling you this because you won’t be able to tell what it is. 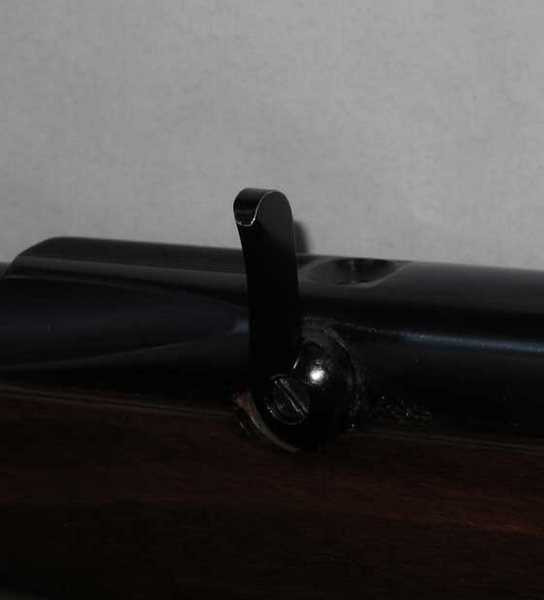 This image of the BSA tap was taken with the rifle against a white background. The white appears gray for reasons you will soon learn. I used flash, which is the enemy of the photographer in these circumstances. This is the way the camera recorded this image.

Why is the white background so gray in the image above? It’s because the camera’s brain was trying to compensate for the dark object that was being photographed in the foreground. And it did!

Believe it or not, the image that you cannot see in the foreground is lighter than it really appears to the camera. Let me lighten the entire image so the background is white, and you’ll see what I mean. 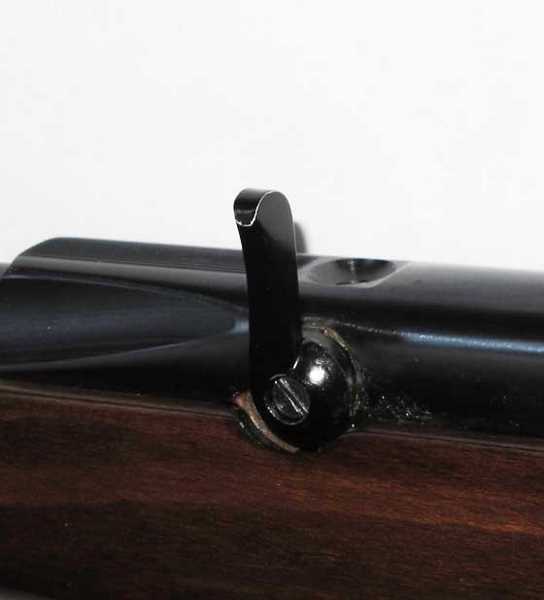 Same image as before, only it’s been lightened to get rid of the camera’s tendency to try to balance the light in the image. Read about this below.

The camera tries to balance the image it sees, so the darks aren’t too dark, and the whites and bright colors aren’t too bright. That’s why the white background appears gray in the first image. I used the flash, so there was tons of light on that white material, and the camera really had to darken the image, to keep it from being too bright. When it does that, it also darkens the main image that’s in the foreground — the image that was dark to begin with — the image we wanted to see. The effect is to turn what you are interested in seeing into a black silhouette!

Let me show you how this image should be lit. Turn off the flash and allow the camera to see the image with less light — yes, less light. To do this, you have to keep the shutter open longer, and that means the camera has to be held steady to keep from blurring the image. 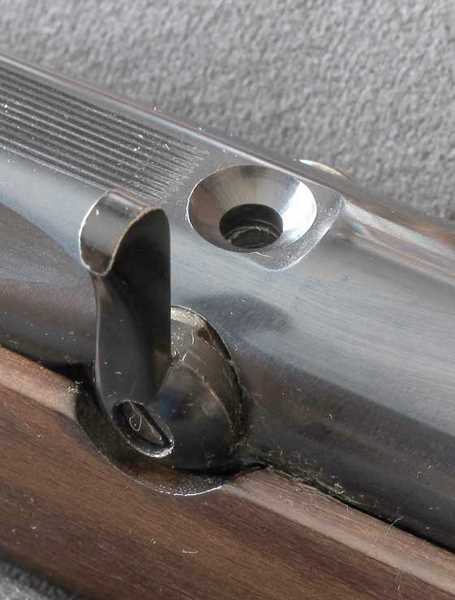 The angle of this shot is a little different than the other two images, but more important is the color of the background. Notice that it’s black! A black image against a black background, and yet everything is clear. This picture was taken with the camera on a tripod and the exposure lasted for one-third of a second.

In the third image the object is easy to see against the black background. And yet, notice that neither the object nor the background are really black. They’re both shades of gray. This is the camera at work, averaging the image so it isn’t too contrasty. By forcing the shutter to remain open much longer for this shot, I got everything exposed more.

If I were to leave the shutter open for a whole minute, this entire image would be white. You wouldn’t be able to see anything because everything would be overexposed. Film works exactly the same way.

Got Photoshop?
Most of you do not own the full Photoshop program, so you can’t do what I’m about to show you. But for those who do, this powerful program can sometimes save the day when a major mistake has been made. I’ll take that first image and Photoshop it to reduce the contrast and bring out the details. 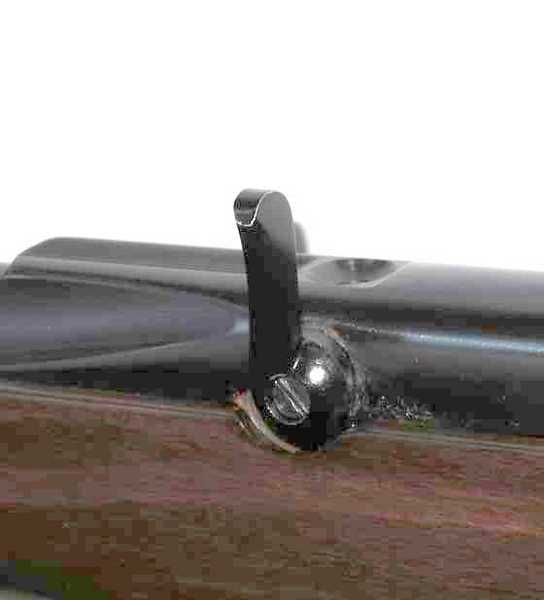 In this image I used the Photoshop program to reduce the contrast and lighten the background. Although this brings out the detail and more can be seen, it also digitizes the image (which I discuss below).

Look at the wood in the two images above — the good one and the one that was Photoshopped. In the image taken without flash, the wood appears natural. In the Photoshopped image you can see small digital blocks of color — the fingerprint of an image that’s been heavily Photoshopped. Look at this wood closely enough, and it starts to look like a cartoon. You can even see this in the metal. That’s because it was “drawn” digitally by the software, while the wood in the image taken without flash appears normal.

The lesson
The lesson is that you don’t need to use flash to take good pictures of your guns. In fact, if you do use flash, there are a great many things you need to think about that that can be ignored if you simply don’t use it.

But you probably do need a tripod! Just like a chronograph is important to shooters, a good tripod is one of those pieces of equipment that amateur photographers try to do without as long as possible. I said a good tripod — not something you pick up at a yard sale for $3. While a really good tripod can cost over $500, you can certainly make wonderful pictures with something that retails for one-tenth of that. Buy it used and maybe cut the price in half, again. It may not be quite as flexible as the more expensive unit, but you can find ways to work around that.

The other thing you need to do is learn how your camera works. You have to take it off the point-and-shoot mode and use some of those menu selections to do what I’m showing here. My camera isn’t an expensive one, but it probably costs more than most people are willing to pay. But I’ve used a simple Canon point-and-shoot camera in the past and gotten great photographs with it because today’s inexpensive digital cameras and even phone cameras have features that rival what the best film cameras were able to do about 25 years ago.

Lesson two
Amateur photographers lack the resources that professionals have. Cloud boxes that eliminate shadows are one resource I’ve always wanted but never had. I compensate with indirect lighting and taking pictures outdoors in the shadows on bright days or in direct light on overcast days — where the sky acts as an enormous cloud box of indirect lighting.

Another resource I lack is an unlimited supply of seamless non-reflective backdrops. I’m talking about material that can be used to set off the photograph in the foreground. Let me show you how I compensate for that. Let’s look at a picture I showed you yesterday of the muzzle of the BSA Stutzen. 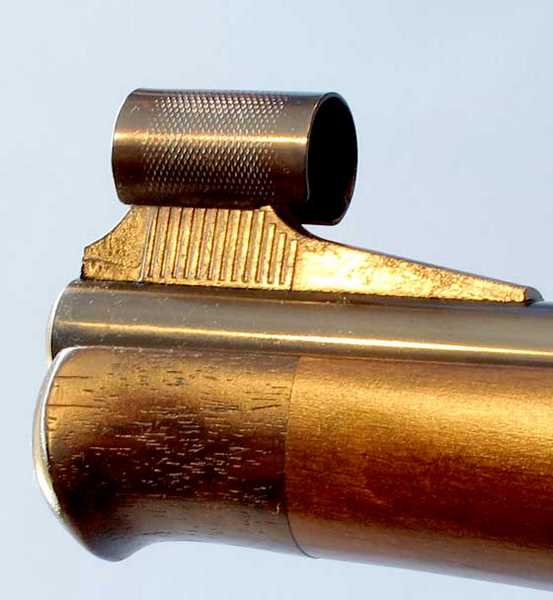 The muzzle of the BSA Stutzen is set off nicely against an even blue backdrop. How did I do it?

To take this picture, I used a tripod, once again. The light in the room was not bright (despite the bright spot seen on the sight ramp), so I set the camera shutter to stay open longer by setting the exposure to the slowest speed setting (setting the ASA/DIN number or film speed to the lowest setting, which is ASA 80 on my camera). Because the camera “thinks” the film takes longer to expose, it keeps the shutter open longer. I don’t do this manually, though I could. Instead, I set my camera to the aperture priority setting and slow down the ASA speed to 80. The camera’s brain does the rest.

Because the shutter will be open longer, I have to use a tripod or the entire image will be blurry. But that’s okay! I am planning on using that tendency to blur to my advantage. The backdrop in this picture is not a blue that has a uniform color, nor is the lighting in the room sophisticated indirect light. Instead, that backdrop is a blur! 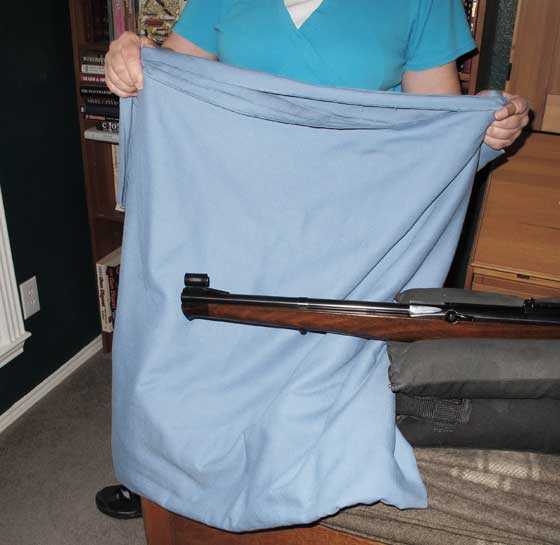 Edith moved the blue backdrop while the shutter was open, so it was blurred in the picture of the BSA muzzle. Because the exposure took so long, the backdrop averaged out and looks uniform. The camera was closer to the muzzle, of course. I backed up to show how it was done, and this picture was taken with flash.

What have we learned?
I hope this report emphasizes the importance of using a tripod with your camera and learning how your camera software controls work.

These last 2 pictures are for those of you who only have cellphone cameras and think you can’t take good detail shots. This image of a Smith & Wesson Frontier model revolver was taken outdoors with my iPhone camera two years ago, and the camera was handheld. The original image is sharp enough for magazine publication. My iPhone has a high-definition setting for photos. 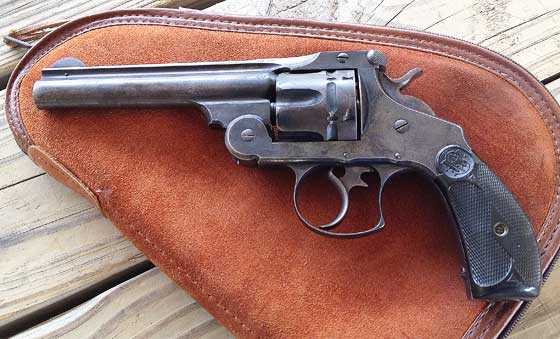 I took this with an iPhone camera two years ago. The camera was handheld outdoors in the shade. The original image is sharp enough for print publication. 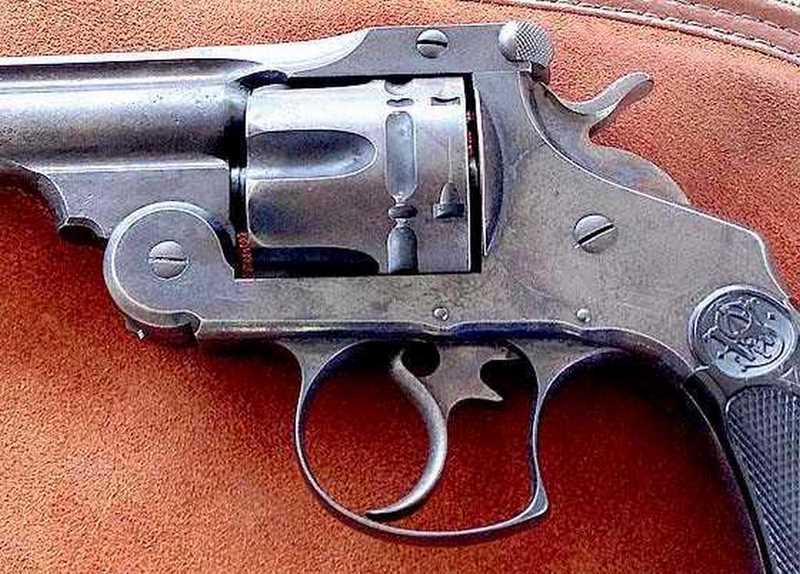 When you can zoom in on a photo like this, the picture is sharp.

Just as it isn’t the gun but the shooter who’s accurate — it often isn’t the camera, but the person taking the pictures who makes or breaks them. Pressing the button and hoping for the best is no substitute for understanding how your camera works and using light to your advantage.