I received a Daisy 1894 for Christmas this year, allowing me to test and write about a BB gun with which I have no experience. Every time the subject of the 1894 comes up, we get comments from many readers who fondly remember the gun from their youth. I never had one, so those weren’t my memories; but when I first saw the gift, I vowed to use it to set the record straight.

Actually, the gun I received wasn’t working. It was a used gun that came without any guarantees. Though it does cock and fire, no BB comes out. But seeing it was the motivation I needed to reach out and get one that worked. The gun I got is an NRA Centennial model. They were sold in sets that included a model 179 BB pistol and the rifle — both in presentation boxes. The rifle box could be taken apart and made onto a rifle stand for display. 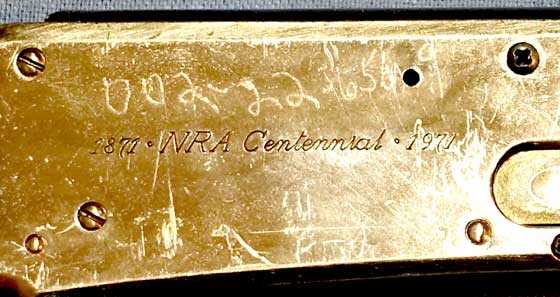 As you see, the side of the receiver shows a lot of wear. The former owner’s social security number clinches the deal, making this just a shooter.

NRA Centennial models are worth $250-300 if unfired; but once they’re used, all collector value goes away. To make absolutely certain of that status, the former owner of this one engraved his social security number on the receiver! This is a shooter and nothing more. I got just the rifle and no box.

History
Daisy’s 1894 was the very first Spittin’ Image BB gun the company made. They started producing them in 1961 and continued through 1986. Besides the standard model, there were quite a few commemorative guns like this one. They hold a premium only as long as they’re in their original box and haven’t been fired. Once any wear shows, the gun drops in value, depending on its condition.

Daisy did revisit the 1894 design for one year in 1994, when they made a special Commemorative Limited Edition. That gun has a manual safety and is not loaded through the loading gate like the rifle I’m testing. Plus, it also holds only 15 BBs.

The rifle
The 1894 looks very similar to a Winchester 1894 lever-action rifle. The exterior is mostly sheet metal with a hollow plastic stock and forearm. The model I’m testing for you has metal bands holding the “rifle” barrel to the “cartridge” tube (really these are just external sheet metal tubes for cosmetics), but there are variations — like the model made for Sears that doesn’t have these bands.

This is a repeater that has an internal spring-fed 40-shot BB magazine. It loads through the spring-loaded loading gate in the receiver, the same as the firearm it copies. Loading is easy once the magazine spring is compressed and out of the way. There’s a thumb piece that you pull forward to compress the magazine follower spring, and there’s no catch — so this piece must be held while loading the BBs. 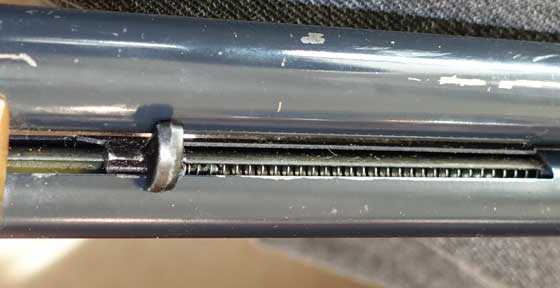 This thumb piece is pushed forward (right) to allow BBs to enter the magazine. 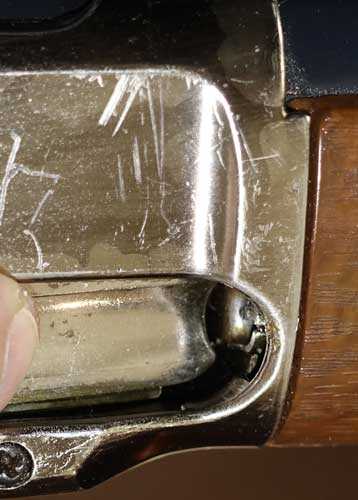 Pushing in or down on the loading gate opens the rear of the magazine for BBs to be loaded.

Cocking the gun is as different as it gets. Those who’ve never owned a Daisy Buzz Barton BB gun may not remember there were ever BB guns that had to be cocked in both directions. When you cock a Red Ryder lever, you pull it open as far as it’ll go until the trigger catches the sear. Then, the lever is under no more tension. It easily swings back to the stored position. That’s not how the 1894 cocks. The lever offers resistance going down and forward, but also coming back and up to the stored position. And even though the gun may be cocked, it still isn’t ready to fire. You must manually cock the hammer before the gun will fire. 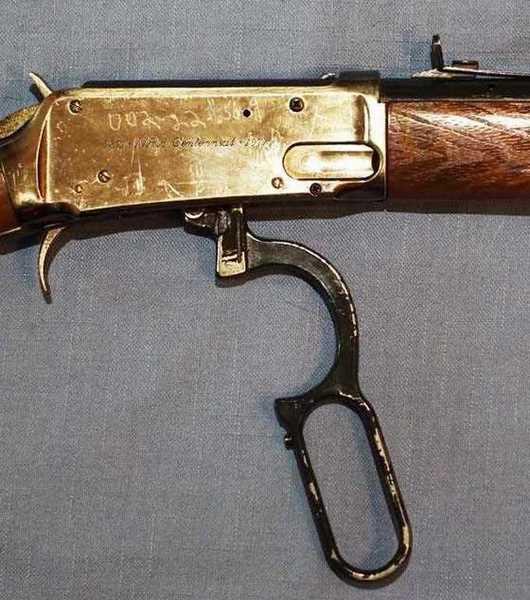 Moving the lever down and forward is the first half of the cocking stroke. There’s resistance as the lever returns home, too.

The part about cocking the hammer seems like a safety provision to me. The later version of the gun actually has a manual safety, but the model I’m testing doesn’t. That extra step of cocking the hammer can be used to make the shooter pause before firing. There’s no possibility of rapid fire with the 1894. 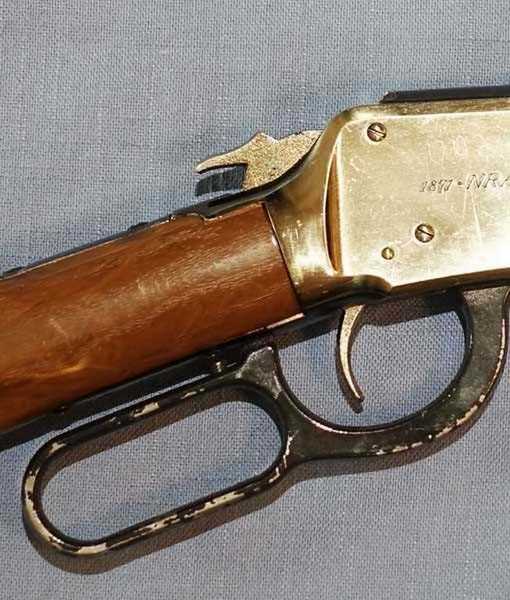 After cocking the gun, thumb the hammer back to make it ready to fire.

The rear sight adjusts for elevation but has no provision for windage. This is another difference of the special rifle made in 1994. Its rear sight does have minimal windage adjustment. 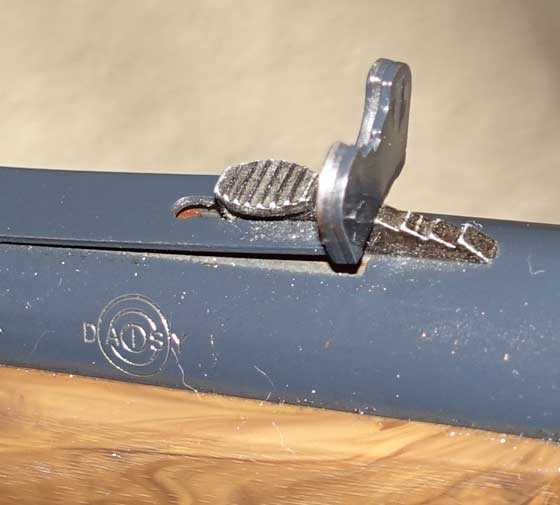 The rear sight adjusts up and down via a sliding notched elevator. There is no provision for windage adjustment.

This is a lightweight BB gun. Mine weighs 3 lbs., 2oz. Overall length is 38.25 inches, and the length of pull is 13.5 inches. I have to confess that the light weight and small size of the gun are what caused me to overlook it all these years. It seemed too toylike. Then I got one.

First impressions
Naturally, I shot the gun many times when I received it. Initially it was shooting slow; but after about 50 shots and an oiling of the piston seal, it picked up speed. BBs that were bouncing off thick cardboard were now sailing through. According to the last owner’s manual, the velocity is supposed to be around 300 f.p.s. We’ll find out where this one is.

I’m starting to understand what it is people see in this airgun. When it fires, there’s none of the traditional BB-gun spring buzz. The gun feels solid despite the light weight. The trigger is single-stage and quite heavy but not to the point of objection. And so far, at close range, the BBs have all gone into the same hole. We shall see!