Today, we’ll see if the Daisy 1894 can shoot. I know that a lot of you have been waiting for this report for a long time. I haven’t been waiting nearly as long as some of you, but I am just as excited. As I’ve said more than once while testing this BB gun, I like the way this 1894 feels when I hold it!

I shot the gun at 5 meters (16 feet, 4 inches) from a UTG Monopod rest. I loaded only one type of BB at a time, so the BBs didn’t mix. I shot at larger bulls this time, because the Daisy has open sights that aren’t too fine. read more

Let’s look at the velocity of my Daisy model 1894 BB gun. Several of you said you were glad to see this report, and I’m happy to do it for you. The 1894 is a BB gun I simply overlooked when it was available. All of you knew how nice it was, but until now I never had a clue.

Daisy advertised the 1894 as a 300 f.p.s. BB gun. That’s not too hot, but also not on the bottom. It’s a nice place to be if accuracy is all you’re concerned with, because 300 f.p.s. is enough to do everything you need. read more

I received a Daisy 1894 for Christmas this year, allowing me to test and write about a BB gun with which I have no experience. Every time the subject of the 1894 comes up, we get comments from many readers who fondly remember the gun from their youth. I never had one, so those weren’t my memories; but when I first saw the gift, I vowed to use it to set the record straight.

Actually, the gun I received wasn’t working. It was a used gun that came without any guarantees. Though it does cock and fire, no BB comes out. But seeing it was the motivation I needed to reach out and get one that worked. The gun I got is an NRA Centennial model. They were sold in sets that included a model 179 BB pistol and the rifle — both in presentation boxes. The rifle box could be taken apart and made onto a rifle stand for display. read more 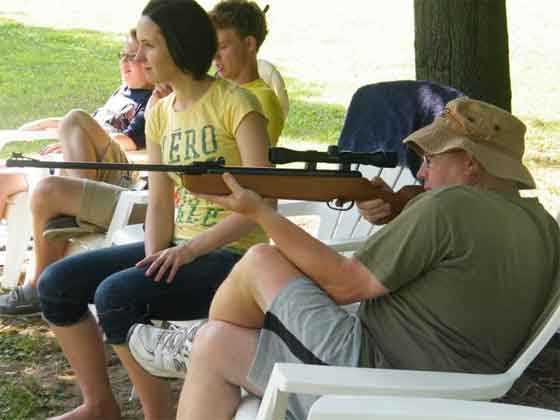