Pellet guns versus rimfires
Today, I’ll begin a report that I’ve wanted to write for many years. How does a pellet rifle stack up against a popular rimfire? When I say, “stack up,” I’m referring to accuracy. The rimfire is still more powerful.

I’ve written many times that a good pellet rifle will bury a rimfire at 50 yards on a calm day. Now, it’s time to find out if that’s correct. Or can a rimfire hold its own?

I’m structuring this test my way, which may not seem fair to you. But I’ll describe what I’m doing, and at least you’ll understand what’s going on.

The Talon SS
For the air rifle, I’ll use the Talon SS. The one I’ll use is my pre-production air rifle, which was made before the gun came on the market in 2001. I’m using it with an optional 24-inch .22-caliber Lothar Walther barrel, because that’s the way I like to shoot it. All the gun parts are original AirForce. Although my model is now obsolete (the Talon SS has been upgraded a couple times since my rifle was made), you can still buy essentially the same gun today. The one aftermarket part on the gun other than the scope is the bloop tube frame extender that acts as a silencer. It does nothing to help the accuracy, but I like how quiet the rifle is with it mounted, so that’s how I leave it.

My Talon SS has an optional 24-inch Lothar Walther barrel in .22 caliber, and a frame extender that muffles the report. It’s been my go-to PCP for many years.

The scope is a vintage Leapers 4-16X50 that’s mounted in 2-piece BKL high rings. I’ve tried to keep the same scope on the rifle over the years, but various tests of both the rifle and other guns that needed scopes sometimes disrupts my plans. So, I find myself sighting-in this go-to air rifle a lot.

The Ruger 10/22
I’m shooting a standard Ruger 10/22, though this one happens to be the deluxe Sporter model that comes with a checkered walnut stock. That adds 50 percent to the price of the rifle over the standard model with its plain beech stock. Other than that, they’re identical. This is a 10-shot semiautomatic rifle chambered for the .22 long rifle cartridge. I got it in a trade last year and discovered that it is unusually accurate. That’s why I want to do this test now! But why do it at all?

This Ruger 10/22 Sporter is just the standard rifle in a nicer walnut stock.

Why this test?
As a gun writer, I’ve always tried to poke holes in conventional wisdom. If somebody says something is possible, I want to find out if it’s true. Sometimes, it is — and other times, it isn’t. Either way, I learn something in the process of investigating.

My buddy, Mac, had told me that his Ruger 10/22 was a “real tackdriver” for several years, so we finally went to the range to see just how good it was. It turned out that his rifle was very accurate, though I didn’t get to test it the same way I test guns today. But at 50 yards, it shot groups that were pleasantly small.

But Mac’s rifle wasn’t stock. He’d had the chamber machined to target specifications, the bolt was re-headspaced, the trigger had been lightened and several other things were done to improve the overall operation. The price of Mac’s gun was about double what a new 10/22 standard sold for at the time.

From my experience with Mac’s rifle, I was bitten by the 10/22 bug and did the same things to my own rifle. Then, I embarked on a 5-part series in Shotgun News that was titled, “What can you do with a 10/22?” I first tested the rifle exactly as it came from the factory, then I tested it after having the same modifications as Mac’s rifle. Then, I installed a bull barrel from Butler Creek and a custom target stock and tested it, again. For all these tests, I shot 10-shot groups at 50 yards — lots of them!

I bought the most expensive target ammo I could find (it was $10 for 50 rounds, back when a standard box of 50 .22 LR sold for $2), and I also tested every other .22 long rifle cartridge I could lay my hands on. CCI even donated several bricks of ammo for this test that spanned several years.

I even acquired a Ruger 10/22 Target model and tested it against both the standard and the modified rifles. This test was thorough! And here’s what I discovered: In all my shooting, I never got 10 rounds to group smaller than a half inch at 50 yards. I read in the shooting forums where guys bragged about the accuracy of their 10/22s, but nothing I shot ever came close to those stories. By the time I was done, I thought I’d laid the 10/22 myth to rest. That all happened many years ago.

Then, last year, I acquired the Sporter model 10/22 I mentioned and pictured above. I took it to the range to see how well it would shoot and was startled by a 50-yard 10-shot group that measured less than an inch. And that one was shot with open sights! So, I mounted a good vintage Weaver V9 scope with a fine crosshair and parallax correction down to 50 yards, and returned to the range. This time, I got a group that measured less than three-quarters of an inch. And this was with a box-stock rifle that still has a creepy 6-lb. trigger-pull!

Time to test the airgun and the rimfire
The success of this new rifle reminded me of the test I always wanted to do between a Talon SS and a 10/22. Mac had sold his rifle by the time I dreamed up the test, and my standard rifle didn’t stand a chance against the airgun. Even with all its modifications, the best it can do at 50 yards is put 10 rounds into about an inch. And when when I install the bull barrel and the target stock, the best I can do with 10 shots is still larger than a half inch.

I sold the 10/22 Target model several years ago, thinking I was done testing Rugers. But this new deluxe model just happened to have a very accurate factory barrel. So, this week I went to the range to begin the test. The poor Talon SS is still in the closet, but I’ve shot it enough over the years to know it can do its job when the time comes. This week, I just wanted to see how well the new Ruger could do. I wasn’t even going to start the test yet, but as you will see, the results changed my mind.

The first group was 10 Aguila High Speed rounds that landed in 1.52 inches. Not a very good beginning! 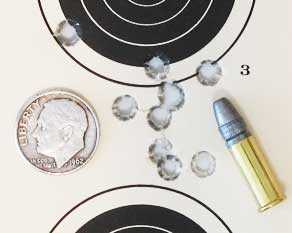 Next up were 10 match rounds from the German firm of SK. I picked up a couple bricks (500 rounds/brick) of these last year but don’t really know much about them — other than they were very pricey! Ten went into 0.957 inches. That was more like it! 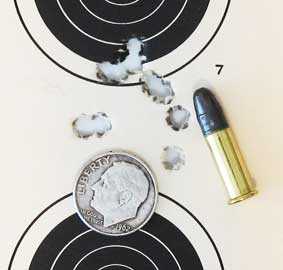 Ten German SK Match rounds made this 0.957-inch group at 50 yards. This is more representative of what this Sporter 10/22 can do.

The last rounds in my range box this week were some fresh CCI standard speed cartridges that I just received from Midway USA. They printed higher on the target and I couldn’t see them through the rifle’s scope because they were inside the bull. When I went down range to collect the target, though, I saw a very small group. 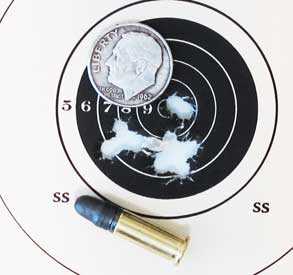 Ten CCI standard speed rounds went into 0.69 inches at 50 yards. This is incredible. No other factory 10/22 I’ve ever shot could do this.

Ten rounds had gone into 0.69 inches at 50 yards. While I’ve shot smaller 10-shot groups at 50 yards with 10/22s, they were shot with highly modified guns. This one is box-stock! Finally, I’ve found an over-the-counter 10/22 that has a good chance against a Talon SS!

The plan
So, here’s my plan. I will take both the Talon SS and this 10/22 to the range several more times and shoot as many good 10-shot groups as I can. Even as good as it is, the Talon SS will shoot a larger group now and then, so I want to give it just as much chance to shine as the Ruger. I’ll save the 3 best groups from each rifle and present the findings here. When I make that report, I’ll tell you how many total groups each rifle fired to get the best 3.

The point
What I’m trying to do in this test is see if what I’ve been writing for many years is correct — that a precision adult air rifle can beat a standard .22 rimfire rifle at 50 yards on a good day. There are many suppositions in my approach. You can argue that the Talon SS is not the most accurate PCP available, and I can’t disagree. If you don’t limit your budget, there are probably several PCPs that can shoot even better. I’m choosing the Talon SS because I think it represents the best value in an accurate PCP for an affordable price.

You can argue that a 10/22 is not the most accurate .22 rimfire. Again, I would agree. I chose it because it’s so universally popular here in the U.S., and also because so many claims for its accuracy have abounded over the years. Sure, there are target rifles from Anschütz and Walther than can do much better! I have a vintage Remington model 37 Rangemaster that’s far more accurate. But it’s a $2,250 rifle! As with the Talon SS, I’m trying to keep the cost of the rimfire rifle within reason.

You can point out that the Talon SS costs a lot more than the Ruger, and you will get no argument from me. But for a PCP, the Talon SS represents a great value. And, from my experience with the 24-inch barrel, I know what it can do. Once the rifle’s been purchased (and, yes, all the support equipment that goes with it), I can get the ammo for a lot less money and it’s always available. The same cannot be said for the Ruger.

The one thing that’s unbalanced about my test is that all Talon SS rifles are pretty much equally accurate, but all Ruger 10/22s aren’t. In fact, I’ve waited for many years to find one that’s up to this challenge. So, maybe my little test doesn’t prove anything. The rimfire guys will not be convinced, and the airgunners will say they knew the outcome all along. That doesn’t matter. Because I’m not just going to talk about it. I’m going to do it. 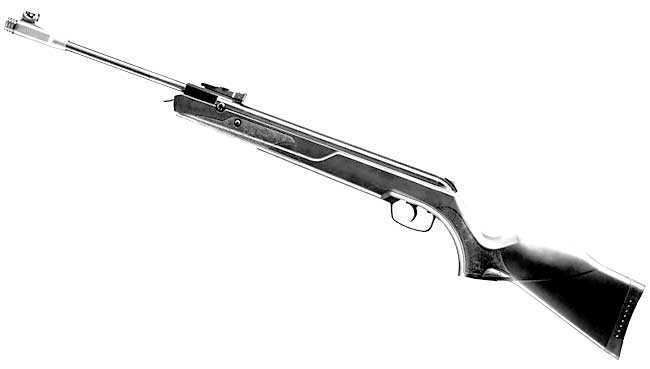