Let’s begin our look at Diana’s gas-spring guns. Specifically, we’re testing the Diana 340 N-TEC Classic in .177 caliber. The serial number of the rifle I’m testing is 01583666.

I’m very cautious when testing spring rifles that have gas springs, because dozens of past tests have made me skeptical over the years. The claims for smooth shooting almost never pan out. The claims for accuracy are often inflated. The cocking effort is often played down when I find it to be a major influence in how easy it is to operate the gun.

I’ve seen fewer than 10 air rifles with gas springs that I could recommend to others. So, as I look at this rifle, I’ll be looking from the vantage point of a lot of past experience.

This rifle is built around the Diana model 34 rifle. That’s another spring rifle that has a lot of history for me. I remember it in the early days, when you could buy one for $90 discounted, and it wasn’t much better than one of today’s wannabe Chinese breakbarrels. Then, Diana embarked on a program of upgrades and transformed their entry-level springer into the best value for the money, in my opinion. And that’s what the 340 N-TEC Classic is based on. So, from the start, this is a rifle that has good genes.

But it has a gas spring! A gas spring is a self-contained unit that functions both as the piston and the mainspring. The unit contains gas under pressure that powers the piston when the gun’s fired. That compressed gas never leaves the gun and doesn’t push the pellet. It is the air compressed by the piston that propels the pellet.

Gas springs has many advantages. They maintain their power when the weather turns cold. They can be left cocked for hours without degrading their power. The don’t have to vibrate like a coiled steel mainspring does — although some gas springs vibrate more than they should. They’re lighter than the coiled steel powerplant parts they replace. These can all be important advantages.

They also have some disadvantages. When you cock them, the effort starts out at the full level the moment the barrel’s broken open, instead of ramping up like a coiled steel spring does. That effort comes at a point in the barrel’s arc that doesn’t have much mechanical advantage. So, gas-spring guns feel harder to cock than their actual effort implies. And they can sting and even hurt when they fire. This is the vibration from poorly fitted parts that gets transmitted through the stock and slaps the shooter in the cheek. It can be very uncomfortable to shoot some gas-spring rifles.

New shooters often ask if the gas inside the unit will leak out. While leakage is possible, in my experience, it’s not a problem with gas-spring guns. In over 100 gas-spring guns I’ve shot, I’ve witnessed exactly one that leaked. Edith’s 2002 Toyota minivan has twin gas springs on the rear hatch, and they still work well after 13 years of use — being fully compressed nearly all that time. And the gas springs in airguns are made much more durable than the disposable units found in cars and trucks!

I’m telling you all of this so the newer readers will know where I’m coming from as I test this rifle. I’m not going to pay any attention to the hype during this test. This rifle will have to perform on its own, and let the chips fall where they may!

If you didn’t know this was a gas-spring rifle you would think it is a Diana 34 by appearances. I chose the Classic because it is so nearly the same as the wood-stocked 34 with open sigthts.

The wood and metal finishes are very nice. The wood finish is smooth and even. The metal has a nice polish on all parts, and the blue (black) is deep. There are some plastic parts — the triggerguard and the front sight ramp — but the trigger blade is metal. I think Diana is listening to what airgunners around the world say they want.

The butt is styled in the Bavarian style. The raised comb is Bavarian, meaning that it slopes gently downward at the back, instead of being straight and then dropping down suddenly. There’s a perch-belly shape to the underside of the butt, and a scallop under the butt simulates a cheekpiece. 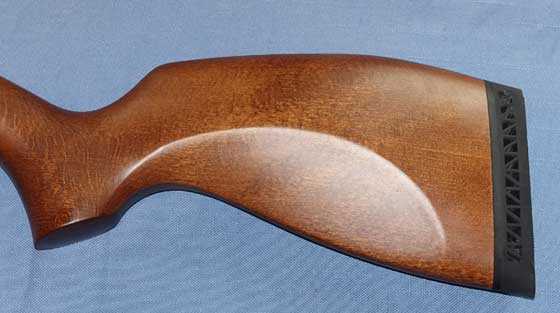 The butt’s comb drops toward the back, which is the Bavarian style. Note the scallop, which is on both sides of the butt, simulates a cheekpiece.

The sights are a hooded post with bead in front and an adjustable rear notch. Unfortunately, both sights are fiberoptic, but you can defeat that with lighting. The rear sight adjusts with very crisp detents, and there’s a scale for windage and numbers for elevation. 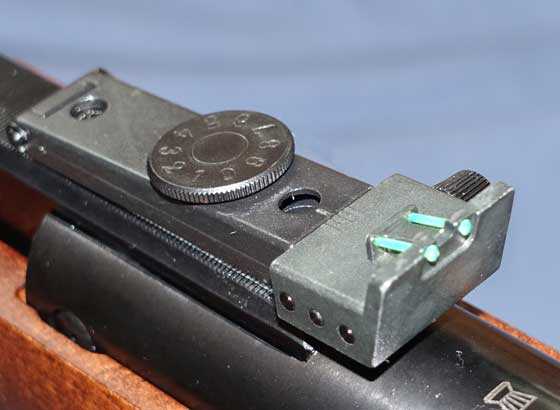 The rifle I’m testing weighs 7 lbs., 12 oz. The listed weight is 8 lbs., 9 oz., but the density of the beech wood can easily affect the rifle’s weight by more than a pound.

I like the scope base. Diana has provided 2 deeper holes to anchor a scope mount that has a vertical scope stop pin, which is something they didn’t have on past models.

The scope base has 2 holes (arrows) for a vertical scope stop pin that look like they will really work.

The trigger is 2-stage and adjustable. The manual does not call it a T06 trigger, and it feels different to me, so I don’t believe it is a T06. But, it has a first-stage length adjustment as well as a pull-weight adjustment. The stated weight range is 400 grams to 500 grams. Since I’ve shot competition air pistol, I know that 500 grams is right at 18 oz. This is a very light trigger!

As it came, I could not feel the second stage. The rifle just fired as the trigger moved. I’ll adjust it in part 2 and weigh it for you.

I shot the rifle a couple times and can give you my initial impressions. First, the barrel breaks open very hard. It has a ball-bearing detent whose spring seems to be very strong.

I have to use 2 arms to break the barrel down initially, but the effort seems to lighten as the stroke increases. The barrel comes way past 90 degrees, so Diana is using a long stroke for greater power.

The firing behavior is not bad. There’s no painful slap when the rifle discharges. Of course, I’ll know more after I shoot it for accuracy.

The trigger is very light, but the release isn’t predictable. I hope I can change that with an adjustment.

The barrel is 19.50 inches long, which gives you a good, long lever to cock the rifle. Don’t even think of shortening it! Remember what Mr. Jones taught you about the length of levers in 8th-grade science class.

If this rifle is accurate, I don’t see why it won’t get a high rating. It has a good trigger, a nice firing behavior, it looks great and I like the scope base. We shall see. 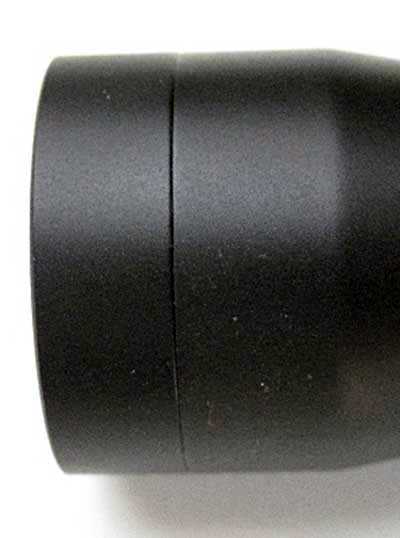